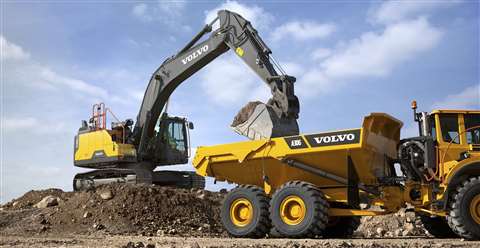 Volvo Construction Equipment (Volvo CE) previewed a handful of new products and technology in Chicago on January 15, including a hydraulic hybrid assist system for its excavators that promises to capture a 15% fuel savings using nothing more than the machine’s own movement.

This advancement, as well as the new 95 metric ton excavator, the EC950F, and a number of other products, will be formally unveiled and on display in the Volvo booth at ConExpo-Con/Agg in Las Vegas, US, March 10-14.

The hydraulic hybrid assist system is being shown on the 30-ton EC300 Hybrid excavator, but will eventually make its way to other models in the line.

“This is a 100% Volvo engineered system,” says Ray Gallant, vice president of sales support at Volvo CE. “We take the energy generated by the boom’s down motion and capture that hydraulically and use it to assist the boom’s up motion. We’re not generating electricity, not putting it in the batteries, not storing it. It’s a very simple system.

“The result is a 15% fuel savings, under normal conditions. In some countries where there are higher fuel costs, that will go up considerably,” he states, adding that there is also a 12% reduction in CO2. “The operator doesn’t have to do anything, there are minimal components, no electronics and no control system.”

Also shown in Chicago at the briefing, which was held in conjunction with the 2020 AED Summit, was the new 95 metric ton EC950F crawler excavator which has been designed to work in tandem with Volvo’s A60H haul truck.

The EC950F is Volvo’s largest excavator and will be the centerpiece of its presence in Las Vegas this March.

“Our emphasis is on excavators because more than half of construction equipment units are excavators,” Gallant says.

“It’s an engine we’re very familiar with, that we have a lot of experience with,” Gallant says. “We know it’s been proven to do the job and give good reliable service for the machines.”

The EC950F offers different configurations with its two boom and arm options.

“We have the GP boom and arm, with a long, extended boom and extended arm, and we have the mass excavating configuration, which is a short boom with a short arm,” Gallant explains. “The difference is very simple. If you need a lot of reach or depth, use the long boom with the long arm. The trade off is you have less capacity in your bucket. If you need a lot of power and productivity, you go with a shorter arm and shorter boom to get all the power in the machine to fill a very large bucket.”

He adds, “One of the more popular configurations is actually a hybrid… a short boom with a long arm. This gives the operator some of the advantages of both configurations.”

Gallant says that with the extended boom and extended arm configuration, the machine can achieve its maximum reach of 46ft. With a breakout force of 76,600lbs - 38 tons of breakout force at the bucket – he says, “this is a very impressive, very powerful machine.”

In North America, the EC 950F and EC300 Hybrid are available for sale/orders at Conexpo-Con/Agg.