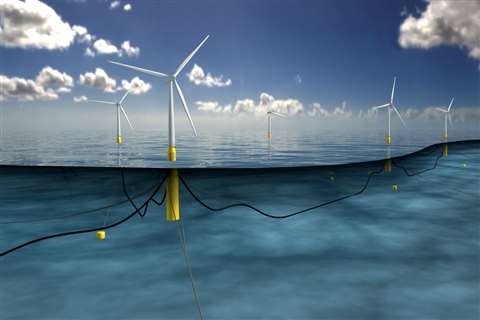 Hywind Scotland, said to be the world’s first floating wind farm, is currently being installed in the North Sea, off the coast of Peterhead, Scotland.

It is hoped that the £200 million (€220 million) project could open new markets for renewable energy production worldwide.

After six years of successful operation of a prototype that was installed off the island of Karmøy in Norway, the concept is now becoming a reality, with five wind turbines being towed into position at Buchan Deep.

Each turbine has a total height of 253m, 78m of which will sit below water while the remaining 175m will stand above water. Collectively, the turbines have been designed to generate up to 30MW of electricity and are expected to start powering 20,000 homes back on the mainland as early as October.

The design of the floating turbines adapts spar buoy technology from the oil and gas industry, whereby large cylinders are used to support floating platforms. They are filled with water and ballast to hold the turbines upright.

This pilot project, which is majority-owned by Norwegian oil group Statoil, is one of a number of floating wind schemes that could open up waters previously considered too deep for conventional wind farms. Each turbine is also secured to the seabed by three suction anchors.

The 4km2 area covered by the pilot park has a water depth that ranges from 95m to 120m, and the average wind speed is about 10m/s.

As one of several floating wind schemes due to be carried out off the Scottish coast, it is hoped that Hywind Scotland will be the first step to unlocking the potential of other waters that have, until now, been considered too deep for conventional, fixed-bottom wind farms.

Such areas of deep water generally have winds that are higher speed and more reliable. They are also more remote, making them less likely to face objection for blighting coastal views.

This is one reason why floating wind farm technology has caught the interest of other countries. The seas off of Japan and much of the west coast of the US, for instance, are too deep for fixed-bottom structures.

If floating wind did become a global industry, it was said that Scottish suppliers could have a first mover’s advantage.

Whether floating wind moves beyond small pilot projects will depend on cost, however.

The initial projects in Scotland were enabled by an enhanced renewables obligation subsidy scheme, which was a type of funding for renewable electricity projects in the UK that closed to new applications earlier this year.

The hope is that costs will come down as more floating wind projects are pursued globally, allowing the technology to compete with other forms of low-carbon electricity generation – as has happened with conventional offshore wind.

The Energy Technologies Institute – UK-based research and development body – has calculated that floating wind could be competitive with other forms of low carbon generation by the mid-2020s.