DH Griffin Wrecking Co in the United States has demolished one of the University of Alabama’s most infamous buildings, Tutwiler Hall. 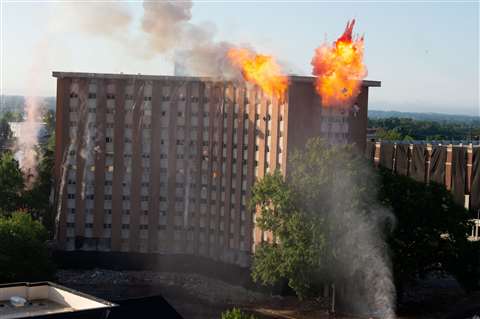 Tutwiler Hall, which was built in 1968 and housed some 50,000 students during its lifespan, was taken down via explosives in just over 20 seconds.

The project saw the companies use around 500 lbs of dynamite, placed into 1,600 drilled in the building’s support columns, to accomplish the task.

According to the University of Alabama, Tutwiler Hall was the second iteration of a building named after education and prison reform activist Julia Tutwiler, who successfully campaigned for female students to be accepted to study at the university.

The newly demolished building was the second incarnation of the original Tutwiler Hall, which was built in 1914 and demolished in the 1960s.

A third incarnation of the hall - also of the same name - has already been built on the university’s campus. Due to open next month, the new Tutwiler Hall house almost 1,300 students.