Regional Report: US market on the up 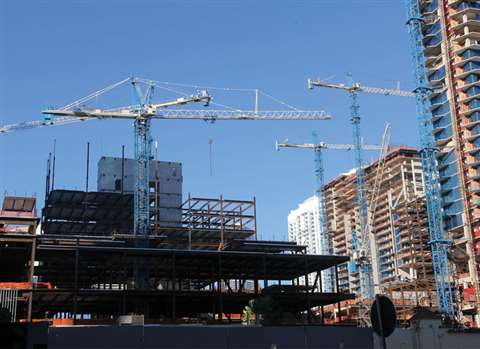 Terex has supplied 11 tower cranes to Swire Properties’ US$ 1.05 billion Brickell City Centre mixed-used development on the Miami River. The scheme sits on a 3.7 hectare site and comprises more than 5

All the data available for the US construction market points to a buoyant industry. According to the US Census Bureau, the value of construction put in place in the 12 months to the end of May this year was just shy of US$ 1.04 trillion, which is the highest it has been since October 2008.

Meanwhile, the Bureau of Labor Statistics (BLS) says employment in the industry approached 6.4 million people in April, which is the highest it has been since February 2009.

Another encouraging statistic from BLS is that despite the industry’s growth since it bottomed-out in mid-2010, prices for materials are staying reasonably in check. Its producer price index for inputs to the construction industry at the end of 2014 was about -1% lower than it had been a year previously, despite industry output growing about +5.5% in the same period.

The reason for the lower prices is the general fall in commodity prices around the world, and this is something of a double-edged sword for the construction industry. On one hand it means what contractors pay for the goods they use and consume are only rising moderately, if not falling in some cases. This covers a huge range of expense items, from building materials like bricks, blocks, cement, pipes and so on to expenses like diesel fuel for construction equipment.

The down side of this is that construction activity linked to commodities is looking weak. This covers a range of energy-related projects in the oil & gas industry, including ‘fracking’ for natural gas, as well as schemes such as mine development.

But there are other indicators of the industry’s improving health and increasing confidence, such as merger & acquisition activity, which tends to pick up in the early stages of a market up-swing. A key deal announced this year is the tie-up between house builders Standard Pacific and Ryland, which will create a US$ 5.1 billion per year player in the residential sector.

This would put it in the major league of the nationally active house builders like D R Horton, Lennar and Pulte, and if the new company delivers cost savings and a better margin, it would put pressure on others in the industry to consolidate.

The last deal on this scale in the sector was when Pulte and Centex merged in 2009, which was more about huddling together to weather the storm, rather than combining to reap the benefits of a growing market.

In fact America’s house builders have already seen a step up in profitability over the last year. As this month’s news report on the world’s 200 largest construction companies shows, the average operating margin among US contractors was 6.8% last year. This compares to 5.65% in the 2014 edition of the study, which was based on 2013 figures. Much of that improvement is due to the residential construction specialists.

But this is just one of the figures which illustrates that the industry still has room to grow. Go back to 2005 – admittedly at the height of an unsustainable residential construction bubble in the US – and the operating margin for US contractors was more than 10%.

Indeed, the 2006 edition of the Top 200 study saw both Pulte and D R Horton ranked in the top ten of the world’s largest construction companies. In this year’s table they are around the 50 mark, but in the depths of the global slowdown around 2009 and 2010 they dropped out of the top 100.

As Scott Hazelton argues in this month’s Economic Outlook, the US residential market is still well below its potential. Housing starts are around the 1 million per year mark, compared to what is considered the natural replacement level of about 1.5 million per year. That gives the US residential developers hope for both revenue and profit improvements in the coming years.
Strong forecasts

Others agree. Speaking at the International Builders’ Show at the start of the year, Portland Cement Association (PCA) chief economist and group vice-president Edward J. Sullivan said he expected US housing starts to increase +20% to 1.2 million units in 2015.

“The forecast is based on sustained strength in the labour markets with more than 3 million net new jobs created in both 2015 and 2016,” said Mr Sullivan. “In addition, wage gains in the context of sub-6% unemployment are expected to reinforce labour market fundamentals.”

“The forecast indicates that the healing in the US economy has taken place. Industry projections continue to be in line with generally improving economic construction fundamentals,” said Mr Sullivan.

The key point is that the US construction industry has grown over the last few years despite the country’s overall economic growth being less than inspiring. According to the International Monetary Fund (IMF), US GDP growth has hovered around the +2.5% to +3.0% mark since 2012, and is not expected to improve much this year or next.

But in the same timeframe, growth in US construction output has been at least +5% and at times as high as +8% per year. That indicates there was some pent-up demand after the crisis years, but it also follows that if GDP picks up to more impressive levels, the construction sector should continue to see at least the same sort of growth levels.

The downside to that is that other pressures could come into the industry, such as labour shortages, spiralling materials prices and longer lead times for equipment. It all goes to show that the industry is in a good place at the moment, with fairly impressive growth but no serious inflationary pressures.

Perhaps the one thing which would benefit the US construction industry most is a renewal of Federal funding for surface transportation – a Highways Bill. The cycle the US has fallen into is for a series of fairly short term funding bills to be passed with temporary measures in between.

The Bush administration enacted a 2005 – 2009 Highways Bill, but the next one, a two-year programme, was not signed until mid-2012. In the interim the industry limped along on no less than nine temporary extensions to the first law. Without them all work would have ground to a halt. The expiry of that two-year law has been followed by more even shorter term measures and extensions.

The problem is funding. The US Highway Fund, which gets its revenues from a tax on road fuel, is running out of money. But it is hardly surprising that it cannot keep up with demand.

As Terex chairman & CEO Ron DeFeo said in an interview with iC’s sister magazine, Access Lift & Handlers, there has to be change.
“We need to get the user fee up 10-15 cents on the gas tax. It hasn’t changed since 1993. Now you can’t tell me, since 1993, that an 18.4 cent gasoline tax has the same value then that it does today. So if we have a highway trust fund that is funded by a gas tax – at a minimum, we ought to index that to inflation, and get back to the same or similar purchasing power, it needs to go up 10 to 15 cents,” he said.

Mr DeFeo also made the point that the funding mechanism needs to change in the face of more fuel-efficient cars, and ultimately a move away from fossil fuels. “The only problem is 20-30 years from now, we’re going to be using less gas. So a gas tax itself won’t be as compelling, which is why we need to use technology to figure out how to user our assets better,” he added.

But with a Democratic in the White House and Republicans controlling Congress, any sort of long-term plan feels unlikely.

That means it might be early 2017 under the next US president before the issue stands any real chance of being resolved.
But putting this aside, the US construction industry is clearly well into an upswing, and its strengthening economy should see that growth accelerate over the next few years.