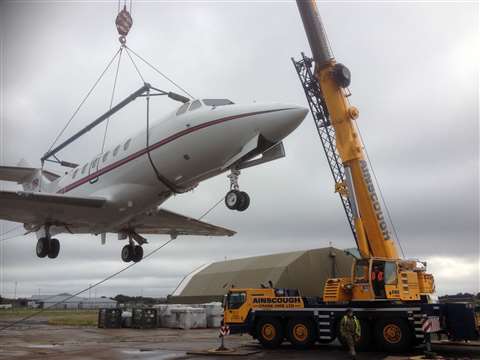 The British Aerospace 125 twin-engine mid-size aeroplane was lifted from storage and positioned on foundation slabs overlooking the runway where it will serve as a gate guardian.

Rapid Response, a UK-based contract lift specialist, was provided with a scope of work by the Ministry of Defence (MoD) Defence Supply Chain Operations and Movements (DSCOM) for whom it is a contracted service provider.

Paul Barber, managing director, Rapid Response, explained that the shape and size of the aeroplane, weighing 6 tonnes, did not present complications as it had built-in lift points and a documented lifting scheme. However, the biggest challenges were presented by the active airport environment and the elements, both of which had to be carefully monitored.

In addition, the lift was to be executed in an MoD facility meaning an extensive lift plan was required and all possible risks to its safe completion eliminated. For example, it was a requirement that the LTM 1095 had 25 % spare capacity.

One of Rapid Response’s appointed persons, Chris Livesey, attended the site three weeks before the lift to carry out a site survey. Livesey created a safe system of work for lifting the aeroplane, including selecting a suitable crane. KranXpert created the crane calculation drawings.

Barber said, “Our lift supervisor briefed the engineers responsible for the plane on the lift day and everyone involved in the task was given clear instructions on their responsibilities. A project engineer was supplied to liaise between the lift supervisor, air traffic control and the emergency services whilst the lift took place.”

Rapid Response had a maximum weight from the plane specification sheets and an estimated weight based on the items removed prior to display. However, Barber explained that there was still an unknown quantity in the amount of ballast required to keep the plane level during the lift. From storage to the new foundation slabs, the plane had to be moved 22 metres across a grassed area of the airfield.

Barber added, “The lifting points were fixed by the plane’s manufacture so the only way to correct the centre of gravity was to place ballast in the nose cone and cockpit of the plane in the form of 25 kilogramme hand weights. Several trial lifts were carried out to get the balance correct.”

When a weather window was chosen to complete the lift, Rapid Response had a lift supervisor and two riggers on site, while five additional representatives of the MoD and the Ainscough crane operator completed the lift team.