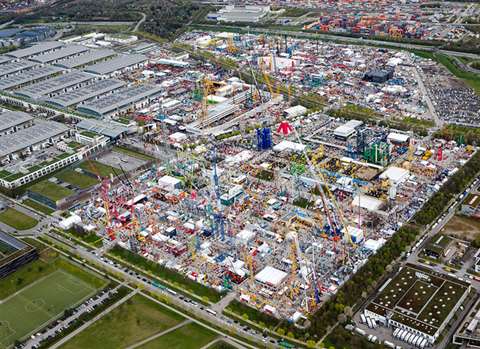 The total number of visitors to Bauma Munich, the world’s biggest construction equipment exhibition, was estimated at a whopping 580000 – a rise of almost 10% on the last event, held in 2013.

IRN caught up with a number of senior figures from the global rental industry – from leading rental companies to large suppliers to the rental industry – to get their take on current conditions in the market. If you are reading this story on a tablet computer, click on the images with ‘play’ buttons to view the full interviews.

This is just a brief snap-shot of the many interviews and product launches covered by IRN and the KHL editorial team at this enormous show. Go to our dedicated Bauma website www.khl.com/sector/bauma/ for the full details and more news from the exhibition – covering the general construction, access, rental, cranes and demolition sectors.

Speaking to IRN at Bauma, Zeppelin Rental CEO Wolfgang Hahnenberg, said the company planned a fleet investment budget of between €100 million and €120 million for 2016, around 50% of which would be spent on construction equipment from Caterpillar, and the other half on the rest of its range, such as AWPs, forklifts, compressors, gensets and much more.

Mr Hahnenberg said the company expected to see flat rental markets in Austria and Germany in 2016, but strong growth in the Czech Republic and Slovakia. “Overall a flat picture for 2016,” he explained.

He said Bauma Munich was a very important show for the industry. “Bauma is just great - for me personally it is a great opportunity to see customers, and it’s a meeting place for the whole industry. From CEOs to customers and operators, they are all here. And you can also see all the innovations from across the construction industry too.”

And for his part, Ulf Böge, marketing director at German rental company HKL, said the company planned to expand amid steadily improving markets. “We expect the German rental market to improve somewhat in 2016,” Mr Böge said. “West Germany is seeing more investment than the east – the problem is distribution of government funds.”

Meanwhile, on the manufacturing side, Cem Peksaglam, CEO of international light and compact construction equipment manufacturer Wacker Neuson, told IRN that there was a global mega trend towards rental.

“We have certain markets that are dominated by rental – the UK, and France for instance – while others have different preferences. But I think that with technological development, we are seeing more and more specialised machines, and people will ask themselves more and more if it is worthwhile to invest in a machine, or if rental is a better option. I think the rental market will grow unstoppably.”

For its part, UK-based manufacturer Morris Site Machinery reported strong demand for its lighting towers around the world.
Speaking to IRN during the show, managing director Phil Winnington said,“We are here at Bauma Munich for the first time, and are collaborating with rental companies in mainland Europe as well. We’ve been impressed by the level of interest we’ve seen from visitors at the show.

“We invest a lot in our research and development activities as well – and, crucially, there is always a seat around the table for the customer in this process. We want to move with our customers and develop products that suit their specific needs.”

“We have plans for Asia, but we can’t divulge them now. We have been investing heavily in Europe, and we see a lot of potential in emerging markets, especially with the CapEx to OpEx shift, which is really driving the success of rental for us.”

He said India and China were “definitely” part of the rental strategy; “That’s part of our ongoing strategy for the next five years – watch this space and you’ll see Xylem develop in those areas.”

In Europe and elsewhere, Mr Tantum explained that Xylem was targeting end user customers with its rental services, and in certain cases it was partnering with general rental companies on a pump re-rental basis.

Meanwhile, Henric Andersson, president of construction products at power tool producer Husqvarna, said the rental market was core to the company’s business. “Rental companies are very important to us, and depending on the geographical market, we see a large proportion of our tools go into the rental sector. We see this as a growth market.”

And Yanmar president Jean-Marc Reynaud also emphasised the importance of the rental market to the manufacturer.

In March, Finnish rental company Cramo signed an agreement to invest in 800 to 1000 Yanmar compact excavators over two years. Mr Reynaud said the company made this choice after several months of testing.

“Total cost of ownership is the key focus for the rental market and beyond,” Mr Reynaud said. “We are also a long-term supplier for other rental buyers such as Loxam, HKL, Kiloutou and many more. The first deals for Yanmar Europe were with rental companies.

“In the UK, we changed our approach to the market in 2013, and we have built a sustainable business model. It’s time to get back into UK rental, and we think we have a good product and service offering now for the rental companies here and we are seeing steady growth in this market too,” Mr Reynaud added.

Meanwhile, Franciso Gracia, executive director of manufacturer Himoinsa, said the company was seeing good momentum in rental markets around the world, and highlighted a recovery in Southern Europe in particular.

“We saw a 15% increase in revenues last year, and forecast growth of between 10% and 15% in 2016,” Mr Gracia said. “We are on budget at the end of the first quarter, so we’ve started well.
“We are seeing increased demand for larger generators around the world, particularly in emerging markets as demand for temporary power increases.

“Big power projects in the Middle East and Africa are driving demand, for instance, while we are also expanding our presence in America, China and India in line with market growth.”

Mr Gracia said the European recovery was also continuing, at a slow but steady rate. “We see demand for generators in Southern Europe recovering, making the overall European economy more balanced. Southern European countries are coming back after strong recessions.”

There were plenty of equipment deals announced at the show as well. UK rental company Hewden’s new chief executive Adrian Murphy confirmed that the company has invested in 21 cranes predominantly over 100 tonnes from manufacturer Tadano. He said the deal, worth around £11 million (€14 million), included two new 220 tonne models.

“We have increased the capacity of our crane fleet to 220 tonnes,” Mr Murphy said. “This includes the 220 model with a hydraulic jib for narrower spaces. We’re stopping at 220 tonnes for the moment, but I wouldn’t limit us to that size crane in the long-term,” he said.

Meanwhile, Netherlands-based Riwal bought the first 1500AJP from JLG. The 1500AJP features an up-and-over height of 18.3m, a working outreach of 23.5m, platform capacity of 270kg unrestricted and 450kg available through a the vast majority of the working envelope.