It is widely recognised that efficiency on construction jobsites is lagging significantly behind the average efficiency of the macro-economy, and the falsework and formwork industry has a part to play in closing that gap.

In fact, Austria-based supplier of formwork Doka recently called for greater efficiency in the use of falsework and formwork.

The company said that global trends such as population growth and urbanisation were driving demand for more mega-projects to improve infrastructure. Yet, according to a 2016 study by the McKinsey Global Institute, the challenge is not being met; global investment in infrastructure is falling short by almost $1 billion annually.

The key to meeting demand is to reduce costs by increasing efficiency in the construction processes, said Doka. And the way to achieve this is through innovation. 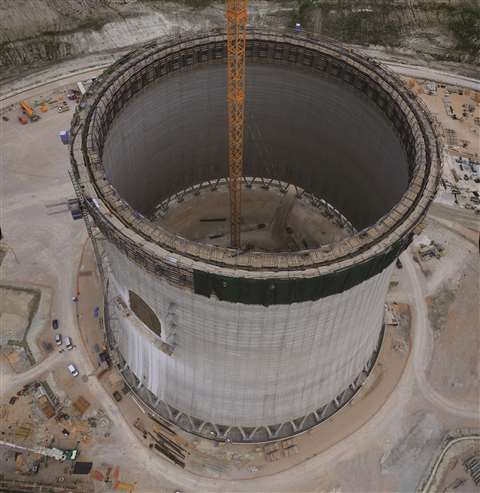 A good example of the company’s innovation is its recent provision of earthquake-proof formwork for what was said to be Greece’s tallest cooling tower, at 170m in height.

Due to the fact that the 660MW lignite-fired Prolemais Block V power plant is located in a seismically unstable area, the company’s subsidiary Doka Greece created a special formwork for the first rings of the cooling tower.

Designed for the seismic-load classification of the region, the system used extra braces, anchorages and stiffening profiles in order to maximise stability and efficiency.

To begin with, Doka’s Top 50 large-area formwork and Staxo 100 load-bearing towers were used to form the first ring.

Then, the company brought in its SK175 automatic climbing formwork, which is an all-mechanical system for pouring section heights of up to 1.5m. It offers precision forming and short cycle times.

The climbing scaffolds carried the steel formwork and were raised from section to section by a minimum of ten electro-mechanical lifting systems, making the operation virtually unaffected by wind and other weather conditions.

In total, 104 units of the SK175 formwork were deployed for this project, while the 108 pouring sections were cast in a one-day cycle.

The cooling tower construction manager Makis Siderakis said, “Doka gave us full support and the design of the SK175 system is excellent. So we’ve been able to stick to a very tight construction schedule.”

The power plant is due to begin commercial operations in 2019.

Another power plant in Poland, the Jaworzno III, is under construction, and Spanish-based Ulma has been providing comprehensive support, including engineering solutions, falsework and formwork, and supervision for the construction of both the powerhouse and the electrical and mechanical systems centre. 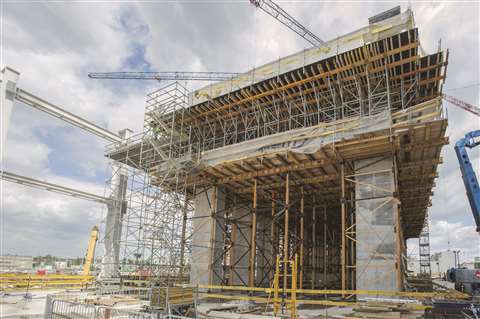 According to the company, building a powerhouse is one of the most demanding aspects of creating a new power plant. In this particular project, both the interior columns and the perimeter walls, which were 6.6m high and 50cm thick, were poured using Orma formwork, designed to withstand pouring pressures of up to 80kN/m2.

The columns were poured using 132cm-wide Orma column panels, which allowed sections as large as 120 by 120cm to be poured without the use of any auxiliary supports or walers.

Ulma’s Enkoflex beam system, supported by T-60 shoring, was used to pour the subterranean slab with a thickness ranging from 30 to 40cm.

The first aboveground slab stood at a height of 15m, with a thickness that varied between 2.38 and 3.9m. It was shored by a two-level structure employing both MK and T-60 shoring.

The first level was composed of MK-360 shoring structures that were more than 7.5m tall, with plan spaces ranging from 1.5 by 2m to 4 by 2.5m. Part of the structure was set on metal beams to ensure an even load distribution.

As for the electrical and mechanical systems centre, the seven-storey building had a quasi-rectangular floor plan measuring 13.3 by 81.75m and a height that varied from 30 to 46m. BMK climbing brackets were used in combination with Orma panel formwork to build the walls.

The construction required 33 individual bracket assemblies with platforms underneath for cone recovery, and the scaffolding for rebar placement was fixed to the BMK brackets to ensure worker safety.

Enkoflex and MK tables were used as formwork for the slabs and beams. The MK table system featured MK walers that allowed Aluprop props to be folded and locked, making transport between levels simpler and more efficient. T-60 towers were used for the slabs at heights reaching up to 9.5m.

Another project where the versatility of falsework and formwork has been exemplified is in Italy, where Spain-based Alsina has been involved in the construction of the Arcisate-Stabio railway line, which will connect Malpensa airport in Italy with Switzerland. 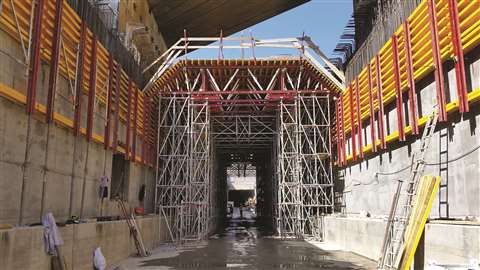 As part of the Arcisate-Stabio railway line between Italy and Switzerland, Alsina’s AR-80 shoring system was used in the construction of the GA30 tunnel

Along its 8km length, Alsina has participated in the building of Gladden station, on the border between the two countries, the GA03 tunnel to Induno Olona in Italy, all the water traps, and several retaining walls.

For the GA03 tunnel, Alsina’s AR-80 shoring system allowed supporting trusses to be used, which enabled vehicles to pass beneath it without interruption.

To achieve the particular shape of the vault, the structure was fixed using the company’s multiform system. Formwork stripping was then carried out using manual lathes operated from above the formwork structure.

This allowed quick recovery and kept the workers safe during the procedure.

Alsina has also been at work in Peru, where it has been helping to construct Barranca Coliseum, a multi-purpose sports centre, 200km north of Lima. 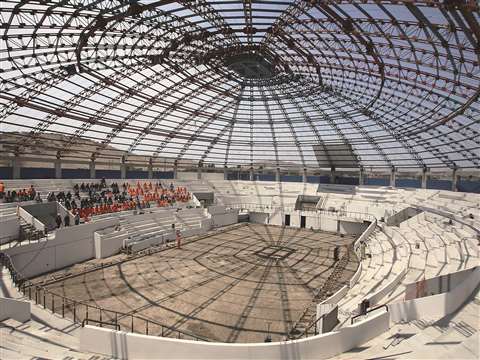 Covering an area of 10,000m2 and designed to accommodate 3,000 spectators, the sports centre required the use of several traditional formwork systems, as well as mixed solutions, in particular for creating the stands.

Semi-curved walls were constructed around the enclosure and the sports court with the company’s Alisply Circular system, and its Alisply Walls Handset was used for vertical structures with variable sections that were between 25 and 30cm thick, and ranged from 2.7 to 5.4m in height.

Meanwhile, the stands were created using a mixed solution that comprised the Mecanoflex system and the CL-40 shoring system.

The Mecanoflex system was also used for the casting of inclined beams that ran through the stands, from the outside to the inside of the enclosure. They were approximately 10m long by 40cm wide and 70cm high.

A cantilever around the outside was created, on which the stadium coordination and media facilities were constructed. For this, the Cl-40 shoring system and a Vistaform platform with 2.45m-long HT-20 beams were used.

Elsewhere in South America, US-based Efco has been working on a 350m-long cable-stayed bridge over the Ariari River in Colombia, supported by two pylons approximately 52m high and 20m wide at the base. 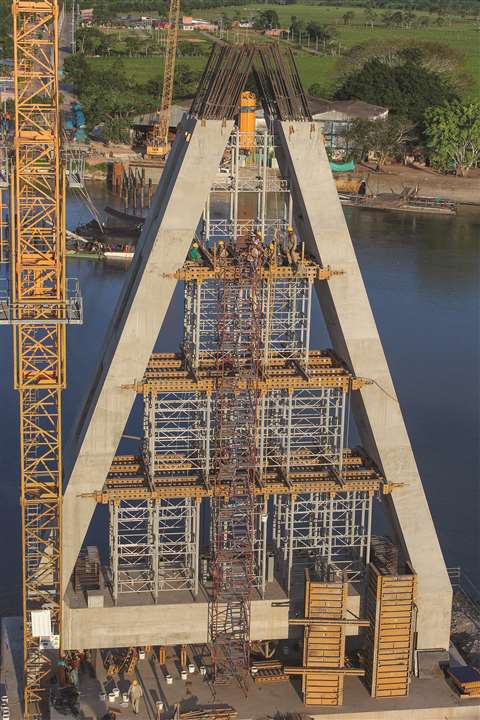 Efco has been working on a 350m-long cable-stayed bridge over the Ariari River in Colombia, supported by two pylons approximately 52m high and 20m wide at the base

On the internal faces of the columns that formed the A-frame, the Plate Girder panels were supported by Super Stud brackets and bracing. The remaining three sides of the column were pre-assembled and set in place later.

After each pour, the Plate Girder assemblies were brought down to the ground for cleaning and the application of a form release agent.

Meanwhile, the E-Z Deck shoring system was used to support the forming for the 20m long by 4.5m wide by 2m high beam at the base of the A-frame supporting the two vertical columns.

The E-Z Deck shore towers were preassembled in a nearby location and moved to the foundation slab to support the formwork for the large cross beam and the base of the pylon.

Productivity was increased by the fact that large gangs of Efco equipment could be moved with cranes throughout the project.

Another technical challenge in the construction of each pylon was the need to provide six temporary compression struts. They had to be installed in three levels below the diaphragm beams attached between opposing sloping columns as soon as they were cast, to provide structural support of up to 22 tonnes of axial load until the merge slab at the top could be installed.

Efco’s Customer Solutions Group proposed an innovative solution that involved using Super Studs as horizontal struts against Efco support brackets, previously anchored to the cast sections of the sloping columns. E-beams were bolted to the Super Studs struts, creating a working platform between the two opposite columns.

In the US island territory of Guam, UK-based Kwikform supplied 208 tonnes of equipment, including five mobile Megashor towers, each measuring almost 20m in height, for the construction of a high-bay maintenance hangar at the Andersen air force base.

Kwikform was involved at the pre-tender stage and had to design a solution that adhered to a tight schedule, along with strict health and safety regulations.

Arlan Vergara, the company’s operations manager, said, “We had to design a solution that was swift and efficient, and minimised the number of site operatives working at height.

“With winds reaching up to 190mph, we decided to use mobile Megashor towers with heavy-duty castor wheels. This eliminated the need to dismantle and fabricate each structure after every pour.”

In order for the site team to complete the arched roof, the towers were moved three times in total.

For the $300 million expansion of Proctor & Gamble’s Beauty and Innovation Center in Mason, Ohio, US, Germany-based Meva was asked to construct a 9m-high wall built into the side of a sloping hill. It required high single-sided concrete wall pours.

The expansion of Proctor & Gamble’s Beauty and Innovation Center in the US called for the construction of a 9m-high wall built into the side of a hill, for which Meva provided a solution

In addition, the contractor required the concrete pours to be done in a single lift.

Meva chose to use its Imperial wall formwork for its ability to handle concrete pressures of up to 97N/m2, and its large panels.

The Imperial panels and STB 450 support frames provided the backbone to this complex project. Five extensions were added to the STB 450 to achieve the required wall height.

Since the work had to be done in a single lift, ties could only be placed at the footing and near the top of the formwork.

Meva engineers designed a custom tension connector to support the formwork under the heavy concrete load and reinforce the rear of the frame. In addition, they designed custom channel seats to allow for the differential placement of the frames and ties.

In India, formwork for 50,000m2 of reinforced concrete was required for the construction of the Lower Baitarani small hydro power project – a 24MW hydroelectric power station in the remote area of Odisha. 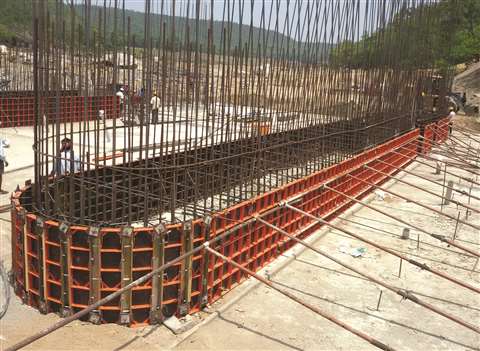 Paschal provided 630m2 of its universal Modular formwork for 50,000m2 of reinforced concrete in the construction of the Lower Baitarani small hydro power project in India

Austria-based Paschal provided 630m2 of its universal Modular formwork to be used in 80 cycles.

Reinforced concrete structures of the dam included an 11.5m-high and 1.25m-thick dam wall, two 76m-long lateral walls, and pier structures measuring up to 25.5m in length, 14.5m in height and 3m in thickness.

With its various elements, the Modular formwork can be adapted to complicated geometries. As a result, Paschal was able to create a customised design for the shuttering of the rounded parts of the structure.