The annual IC crane rental confidence survey provides a clear picture of the global crane rental market as well as gauging what the future may bring. ICST reports

A little under half (43 %) of respondents in this year’s crane rental confidence survey said that business conditions in their area of the crane rental market were improving. These responses were primarily from the Middle East, with the remaining respondents around the world divided between stable (35 %) and deteriorating (22 %). One respondent, from India, commented, “the market has been poor since 2016 but is now improving, albeit at a very slow rate.”

Compared with last year’s survey this is a decrease of 10 % in respondents reporting improvement; yet despite this optimism for 2018 is high – with 48 % saying that they thought business levels would improve in 2018, particularly in the Middle East. It’s an increase of 16 % on last year’s figure – while 35 % of those surveyed believed business levels would remain stable. This left just 17 % forecasting a decline, particularly around South Asia.

Related to this, 39 % of responses claimed that they would be increasing the level of capital expenditure on their fleet in 2018, with the majority of respondents reporting this coming from the Middle East. This is a significant increase of 18 % on last year’s figure. In the rest of the world, the majority of respondents (48 %) said they planned to expenditure keep it the same. Just 13 %, primarily from South Asia, said they would spend less on their fleet in 2018. 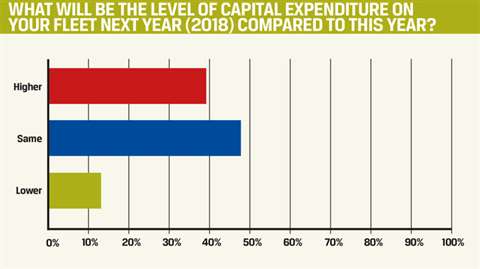 Optimism is tempered by caution, however, with the majority of respondents (70%) playing it safe in terms of company expansion, saying they planned to keep the number of employees it has the same. This caution was particularly apparent in companies based in the Asia Pacific region. This is an increase of 34 % on last year’s figure. In the survey, 22 % of respondents, mainly from the Middle East, said they were looking to increase their number of employees, while just 9 %, mostly from South Asia, said they were planning to reduce their number of employees. 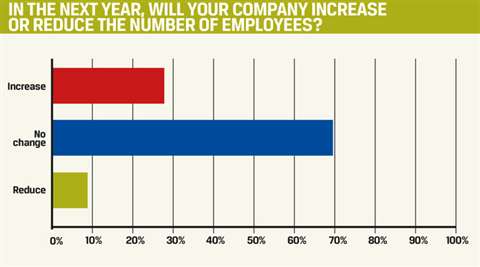 The apparent positivity from the Middle East is not unanimous, though. One respondent pointed out that it depends in which part of the Middle East you are operating, “Countries such as Kuwait, Bahrain, Oman and Qatar are booming thanks to the influence of the booming petrochemical and power (combined cycle power plant and wind power) sectors, along with civil engineering projects (including the construction of stadiums, airports and metro systems) and the offshore sector where there is demand for upending jackets. This is generating work for a range of mobile cranes ranging from 50 tonne capacity to 3,600 tonnes. On the other hand, in Saudi Arabia, the reduction in government expenditure is having an effect. Therefore, pricing has to be determined and tailored to the specific region. It also depends on the local availability of equipment in each local market.”

Another respondent, from Oman, said that crane rental rates have dropped drastically there due to the influx of Chinese cranes in the market. “With less demand there is huge competition in the market to get daily or monthly rental jobs. The trend has moved from using high cost equipment to using low cost equipment.”

While a respondent from Bahrain, said, “We saw an improvement in our rental business in 2017 compared to the two previous years. This is primarily due to our strategy of fleet maintenance and new projects being awarded to us. Hopefully this trend will continue in 2018.” 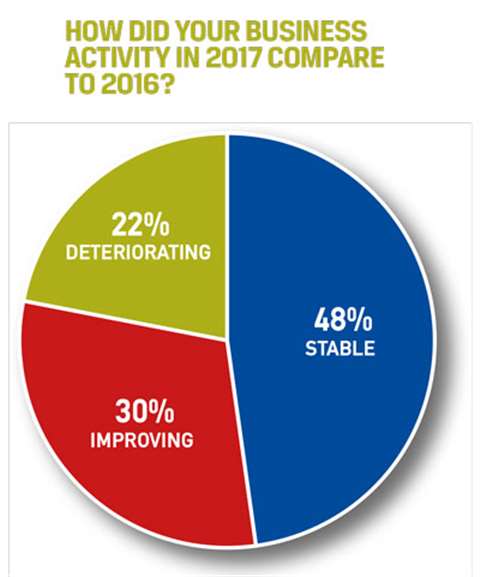 In the 150 tonne capacity wheeled mobile crane category, half of respondents said rental rates remained the same over the last 12 months, with the remaining split between 19 % saying rates were higher and 31 % saying they were lower. This was an increase of 13 % in companies saying they charged more compared to the previous year’s figures.

150 tonners, it shows an overall decrease in the rates being charged. This leaves 36 % and 9 % saying that they charged the same or more respectively, for both capacity levels.

Moving to tower cranes, in the 100 tonne-metre class of cranes none of the respondents reported they had raised rates over the last 12 months. Compared to the previous year, when almost half of those surveyed said they had raised rates, this shows a dramatic levelling off off. As such, 71 % reported that rates had remained the same for 100 tonne-metre tower cranes, with just 29 % saying they had reduced rates over the last 12 months.

In the 300 tonne-metre tower crane class, a quarter of those surveyed said they had increased rates over the last 12 months. Companies charging either the same or less were equally split at 37.5 %. Compared with last year’s figures, in which 40 % of companies said rental rates had increased, this shows a moderating of rates for this class of tower crane.

Looking ahead over the next 12 months, in the 50 tonne wheeled mobile crane category 41 % of respondents said they planned to charge higher rental rates. This is an increase of 31 % on the previous year’s rental confidence survey’s figures. The majority of companies, 47 %, renting this class of crane said their rates would remain the same. This leaves just 12 % saying they planned to reduce rental rates.

In both the 70 tonne and 150 tonne capacity crawler crane categories, 56 % of respondents said they forecast their rates to remain the same, with the remaining responses split between 33 % saying they would be higher and 11 % saying they would be lower for both categories of crawler crane. In terms of numbers stating rates would remain the same, this is similar to last year’s figures of 53 % and 50 % for 70 and 150 tonne capacities, respectively.

Moving on to the forecast rates for tower cranes, the majority of respondents (68 %) said they planned to keep rates the same for 100 tonne-metre towers. Compared to last year, this is an increase of 17 %. Remaining responses were split equally, with between 16 % of respondents saying rates would be higher and the same number saying they would be lower.

In the 300 tonne-metre tower crane class, 44 % of respondents said they planned to charge the same with, again, an equal split in replies between higher and lower at 28 %.

With regards to fleet time utilisation, there was an equal divide in opinion, with 36 % of respondents saying they though it was either improving or stable. These responses primarily came from the Middle East and Asia Pacific. Companies based in South Asia, however, predominantly reported that fleet time utilisation was deteriorating (28 %).

Looking to the next 12 months, 50 % of respondents in the 50 tonne capacity wheeled mobile crane sector said utilisation rates will increase. This is a jump of 28 % on last year’s survey figure.  This left 31 % saying utilisation rates would remain the same and 19 % saying they would be lower.