Among the Commonwealth of Independent States (CIS) – which comprise Azerbaijan, Armenia, Belarus, Georgia, Kazakhstan, Kyrgyzstan, Moldova, Russia, Tajikistan, Turkmenistan, Ukraine and Uzbekistan – Russia dominates. Yet, even with some signs of economic recovery from recession, the country remains one of the weakest candidates in the world for construction investment, with its poor growth prospects compounded by a lack of business confidence and poor government policies.

It has been estimated by economics organisation IHS Global Insight that Russia’s real GDP (gross domestic product) growth in 2017 will come in at 1.7%, and will strengthen to 2.1% in 2018, with a slight deceleration to 1.9% in 2019.

In addition, oil prices have regained some ground, the weakened ruble has boosted Russian competitiveness, and the government is continuing to pursue its anti-crisis programme. Facing difficulties in borrowing from Western capital markets Russian entities have turned elsewhere, particularly China.

However, international tensions, poor finances and a lack of transparency in business practices create a relatively high-risk environment for construction companies in Russia, according to IHS Global Insight.

The bubble chart looks at the risk associated with a long-term investment project in Russia compared with other Eastern European economies. The construction risk score is an indication of long-term investment risk, including such factors as the ability to repatriate earnings, enforce contracts, protect intellectual and physical property, and the stability of the workforce and prices. The cross-hairs indicate global average risk and growth.

In the longer run, non-residential projects are predicted to fuel a compound annual growth rate of 2.6% between 2021 and 2026.

One example of spending on construction in Russia is the Lakhta Centre in St Petersburg. Once completed in late 2018, the Lakhta Center will have the accolade of being the tallest building in Europe. This futuristic building complex, designed by Tony Kettle with a useable floor space of around 400,000m² across 87 storeys, will eventually rise to a height of 462m. It will incorporate a high-rise office building, a hotel, a science world for children, and sport and recreational areas.

Peri has been providing the contractor of the project with formwork solutions for the record-breaking foundations through to the complex shoring arrangements.

Planning work for the foundations proved to be extremely complicated, not only due to the height of the structure but also because of the difficult ground conditions. With the construction site being situated directly on the coast, Peri said that high wind loads also had to be taken into consideration.

The main challenge in creating the high-rise building was the continuous, spiral-shaped rotation of its design. This meant that the slab areas were constantly changing.

The special requirements for the foundations could not be met with a massive bottom slab, which meant that a project-specific special solution had to be developed. For this, 264 piles had to be put in place, reaching a depth of 82m.

When concreting the foundations, the construction site team set a new world record, entering the Guinness World Records as the biggest continuous concrete pour ever carried out.

The foundation work proved to be very complex and Peri application technology from Russia was used to develop the formwork solution for the foundation walls. The ACS self-climbing system was combined with Vario GT 24 girder wall formwork to create the core. This allowed the formwork to be lifted quickly to the next casting segment each time, without the use of a crane and regardless of the weather conditions, said Peri.

Due to the flexible design of the girder wall formwork, the construction team was able to continuously adjust the formwork to suit the changing building geometry. 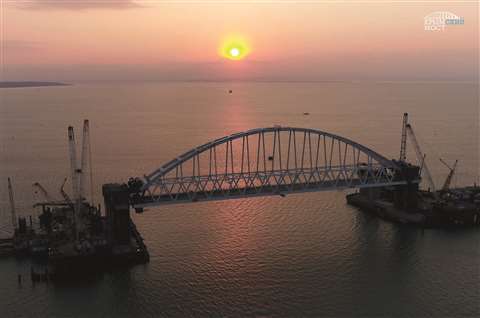 A 6,000 tonne arch was lifted into position on a bridge that will span the Kerch Strait, between Russia and Crimea

On the border between Russia and Crimea, a large arch weighing 6,000 tonnes was recently lifted into position on a road-and-rail bridge that will span the Kerch Strait.

The process of raising the arch took about 12 hours. The arch was initially raised off a floating system to a height of one metre and held there for an hour while 30 engineers, slingers, surveyors and quality specialists checked the reliability of all the mechanisms.

The arch was raised just above the target height in order to be lowered onto its supports, and over subsequent days it was fixed into position using wind connections. The following month, the construction workers mounted the end elements of the arch.

The 227m-long structure was for the railway section of the bridge. The road section will also have an arch, and both arches will provide a clearance height of 35m, meaning that ships will be able to pass underneath them unhindered.

The bridge’s two-way railway was designed to have up to 47 pairs of trains cross it per day, while the road section will have a four-lane highway with a capacity of 40,000 vehicles per day. The bridge is scheduled to be ready for cars to cross by the end of 2018. 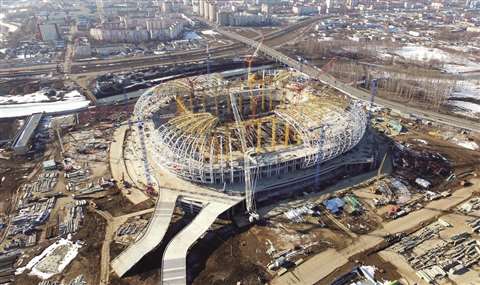 In the Russian city of Saransk, heavy-lift specialist ALE recently completed the lifting and installation of 1,300 roof sections for the Mordovia Arena stadium, one of the numerous venues where the 2018 FIFA World Cup will be held.

Each roof section weighed 80 tonnes and had different dimensions. ALE used a 750 tonne-capacity crawler crane with a 45m luffing jib in the largest configuration possible to lift and install the roof sections.

As there was limited space inside the stadium, with just enough room to pass through the gates, ALE stretched the crane’s main boom to 118m.

It took nine months to lift and install the roof sections and, despite the challenging winter season, ALE said it met the set deadlines of the stadium’s building schedule so that it is ready for the major sporting event of 2018.

In 2017, a memorandum of understanding was signed between Russia and Iran for the construction of a 1,200km natural gas pipeline between Iran and India.

The agreement was signed during Russian President Vladimir Putin’s visit to Tehran, the capital city of Iran.

Alexander Novak, Russia’s energy minister, said, “We have agreed to assist in the implementation of the project for gas supply from Iran to India. This is a large-scale project with Gazprom participation.

“The company will develop gas fields on Iranian soil with all the necessary infrastructure for gas supplies to India to be built.”

Although it was too early for Novak to disclose how much the scheme might cost, he said, “It will be big because there will be an underwater section in the Persian Gulf – it’s a capital-intensive project.”

The project involves upgrading outdated facilities and installing new technologies and systems at the plant, which is located in Tabriz. As part of the contract, a new desulfurisation system will be installed, enabling the plant to meet the new Euro-5 emissions standard.

SK E&C will undertake the design, purchase, construction work and financing on the project, with its Iranian consortium partner, Oil Design and Construction Company.

Construction work at the plant, which was said to have a refining capacity of around 110,000 barrels per day, is expected to take 36 months from breaking ground to completion.

According to a report published by British-American research firm PMR in 2017, business confidence reached a three-year high after construction activity in Ukraine grew by 17% year-on-year in 2016, after a cumulative decline of 42% between 2012 and 2015.

This recent upsurge in construction activity – which applied to all subsectors in the industry – was said to reflect, in part,

the fact that the sector was currently recovering from a particularly low base. PMR said it was also helped by the improving macroeconomic figures, including a rise in disposable personal income.

The strengthening consumer purchasing power and improving economic environment were believed to have encouraged a revival in the private sector, which in turn drove up demand for building materials, primarily for infrastructure development projects.

In the period from January to April 2017, the significant increase in total construction output was fuelled by a solid performance in the non-residential subsector, which grew by almost 21% year-on-year. This was complemented by a 17% expansion in both residential construction and civil engineering output.

Prospects for the Ukrainian construction industry were said to remain relatively good in the medium-to-long term, with the current upward trend expected to continue throughout the year 2017. This was supported by the fact that most of the country’s production facilities and transport infrastructure were said to be in need of reconstruction or extensive modernisation, which would drive demand.