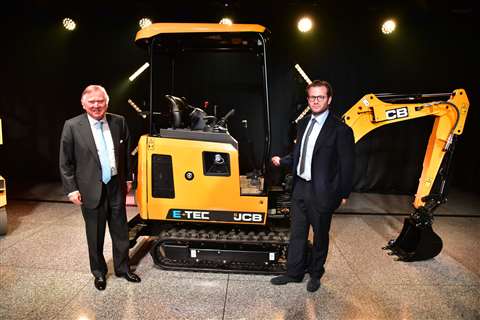 JCB has revealed its first fully-electric mini excavator, which was developed in secret at the company’s Staffordshire headquarters in the UK.

The new 19-tonne 19C-I E-Tec was heralded as a ‘real breakthrough’ by company chairman Lord Bamford.

He said, “With urbanisation, machines are operating more closely to people as well as digging underground, indoors, near hospitals and in food production environments.

“As a result, there is a new zero emissions sector emerging and it’s emerging very quickly. It’s for this reason we have put ourselves at the forefront of alternative power technologies and developed the first ever electric JCB digger.”

The 19C-I E-Tec has an electric motor and three lithium-ion battery packs, which deliver a total energy capacity of 15kWh. With this set-up, the excavator is able to dig with the same speed and power as its diesel counterpart.

The batteries can be charged from a standard 230V domestic electricity supply, but super-fast charging is also available, which was said to cut the charging time in half.

The fact that it is fully-electric means that the mini excavator is also the quietest machine in JCB’s range, so contractors can use it after normal working hours in urban settings without causing a disturbance.