When the United Kingdom’s National Savings and Investments (NS&I) moved to a new home, the job of demolishing its old one – less than 100 m (328 ft) away – fell to Lancashire-based contractor Pete Marquis using Hyundai demolition excavators. 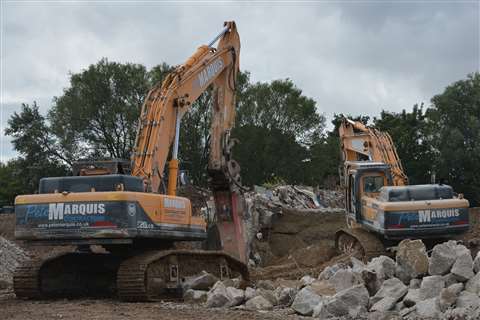 The huge reinforced concrete building was set to be replaced by 160 new homes on the site it occupied next to the large Marton Mere caravan park, just outside the famous seaside town of Blackpool.

The Pete Marquis team was out in force to complete the demolition of the building, which included an eight-storey tower that dominated the local skyline. Having purchased several Lehnhoff Lehmatic quick coupler systems for its smaller demolition specification excavators, one of these examples was undertaking the secondary processing of a huge pile of reinforced concrete material.

Central to the equipment on site, however, were three additions to the fleet from Hyundai. Wanting to expand the larger offerings of excavator in the fleet, Marquis purchased a pair of Hyundai R520s and a slightly smaller R480 excavator from local dealer Taylor and Braithwaite (T&B).

To avoid the massive expense of investing in three new machines of this size, the company looked at acquiring good quality used examples.

T&B was able to get hold of these from various sources around the UK.

One job that the two larger excavators undertook side by side was to remove the last of the extremely heavy footings. One was equipped with a Geith ripper tooth and the other with a new Rammer 5011 5 t hammer to extricate the large lumps of concrete and breaking them into more manageable pieces before being fed into the mobile crushers.

Both R520 machines are -9 models and have been supplied with full falling object guards for the cab along with superstructure side impact protection.

The third Hyundai in the fleet is a slightly smaller R480-9A machine. Powered by a 12-litre Cummins QSX diesel delivering

277 kW, the 48 t machine was used to load the Terex Finlay jaw crusher with the concrete arisings from the demolition work.

Fitted with a heavy duty, 2.5 cu m (88 cu ft) bucket, the Hyundai steadily loaded the jaw crusher with material. Despite the best work from the hammer equipped machine, the crusher was having to deal with pieces of rebar in the concrete. Similarly equipped to the larger machines, the R480 was supplied with a falling object guard and full auxiliary pipework, the only difference being a Miller hitch instead of the Geith versions. Sitting on top of a pile of material, regular 480 operator Marshall Ford was able to use the machine to its full capabilities. With a 16 m (52 ft) reach and 12 m (39 ft) dig depth he was able to bring in the material from a wide radius around the machine and still able to sit a safe distance from the crusher hopper when loading.

All three machines have had been a constant presence on the NS&I project. Working alongside the range of excavators in the Pete Marquis fleet, they are currently the biggest machines used by the company.

“We have our fitters based in locations that allow us to cover our area quickly and effectively,” said T&B’s Kevin Bell

“We like our fitters to get to know our customers personally, and vice-versa. It is better for the customers to be able to speak to the fitters directly should there be a problem with anything. This also goes up the management ladder, and should it be needed, our directors will always answer the phone to sort out a problem.”

Marquis has endeavoured to recycle as much material as possible from the project. Soft stripping the building prior to demolition has made sure that the material removed has not been contaminated and can be recycled or reused where possible.

The concrete and masonry from the project has been run through the two large mobile crushers on site will be used in the construction phase of the project.

The fleet of Hamburg, Germany-based contractor Ehlert & Söhne includes several 22 to 60 t crawler excavators and one 22 t wheeled excavator, as well as different wheeled loaders with capacity of 3 cu m (105 cu ft). When it was looking for a powerful high-reach demolition excavator, it chose the Liebherr R 960 Demolition model. 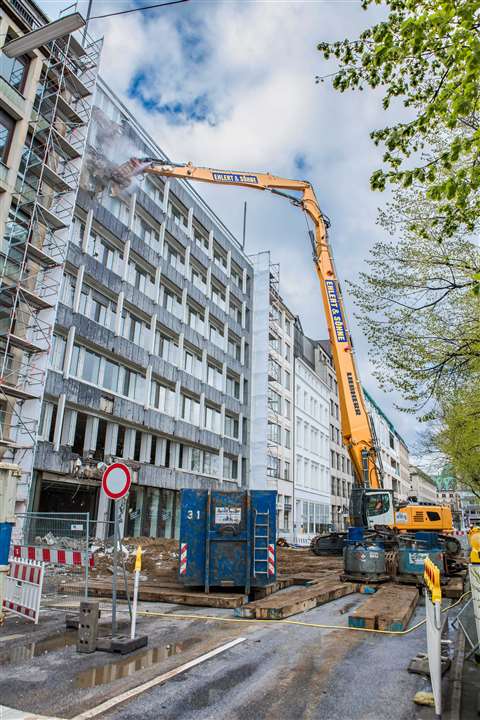 In 2017 Ehlert and Söhne was commissioned with the demolition of a seven-floor building in the heart of Hamburg. The company deployed the crawler excavator for this big project, being impressed by its robustness after more than 1,000 hours of operation.

The R 960 has an operating weight of approximately 90 t and a 250 kW engine that complies with the Stage IV exhaust emissions standard. Average fuel consumption is between 27 and 30 l/hr.

The successor to Liebherr’s R 954 C Demolition, it can reach operating heights of 33 m (108 ft) and stands out for its tool weight of 3.5 t for higher cutting and breaking forces.

On the basic machine the attachment and removal of equipment and tools is fast and simple. The 360° range with the same stability and reach of the machine also provides a competitive edge by allowing the rapid removal of demolition material from the working area.

Liebherr France SAS in Colmar is the historical production site of Liebherr crawler excavators from 18 to 100 t.

With more than 50 years’ experience, Liebherr-France was able to offer the adapted solution for Ehlert & Söhne.

This demolition excavator has the Liebherr Demolition Control (LDC) system, which won an Intermat Innovation Award in 2015. This shows the operator the position of the demolition attachment and guarantees the stability of the excavator.

The R 960 Demolition crawler excavator also has a water spraying device, a hydraulic removable counterweight to reduce the weight during transportation, a compressed air system and a retractable undercarriage.

Moreover, the cab can be tilted at 30° offering the driver improved visibility of the working area.

The two operators are equally satisfied with the machine, its comfort, stability, sensitivity and the low level of noise when in use. The seat can be adjusted to individual requirements whereas the controls and displays are in perfect harmony with the ergonomics of the machine.

Ehlert & Söhne has had Liebherr machines in its fleet since it acquired two R 941 crawler excavators and an A 901 wheeled excavator as its first models 25 years ago.

Liebherr believes that the acquisition of the R 960 Demolition marks a new milestone in the partnership.

The company, based in Hampshire in the south of England, bought the 75 t excavator from SMT GB, which markets Volvo Construction Equipment products in the British market. The machine will serve as an addition to R Collard’s extensive mixed fleet of mobile plant and is being used on a 12-month demolition contract taking place in the west of London where it will dismantle four-storey buildings and multi-storey car parks on an 8.1 ha (20 acre) site.

“We were impressed with the specification and build quality of the EC750E when we went to Rotterdam in the Netherlands to inspect the machine at Volvo’s European machine receiving centre,” said managing director Robert Collard.

“And watching it go to work on its first day on site, I’m equally impressed with the machine’s performance.”

The machine was specified with a 7.7 m (25 ft) boom, a 3.55 m (11 ft 6 in) dipper arm and a Hills hydraulic hitch which can facilitate the fitting of a 4 cu m (141 cu ft) heavy-duty bucket and a range of demolition tools including a 7.5 t Verachtert shear that can tackle both concrete and steel.

To operate a range of hydraulically powered attachments, the EC750E has been equipped with both hammer/shear lines and an X3 rotation circuit. The machine can be programmed with pre-set flows and pressures for the different attachments being used.

High and low reach with Kobelco

After years of research, development and gathering feedback from the European market, Kobelco Construction Machinery Europe (KCME) has launched its SK400DLC-10 and SK550DLC-10 demolition machines.

The new models feature Kobelco’s proven NEXT system for both high elevation and foundation demolition work and are said to provide for safe and quick solution for the assembly and disassembly of attachments and easy transportation between projects.

Kobelco chose the Bauma exhibition in 2016 to show its SK400DLC-9 to the European market and in the next 12 months the views of dealers, customers and operators, combined with an increasing demand for demolition and heavy machinery led to further improvement.

However, the machines can also be adapted for multiple applications on the job site, including high elevation demolition projects and breaking up foundations.

The NEXT ultra-high attachment is best suited to the demolition of multi-storey buildings from ground level.

The separate boom configuration is suited to tackling the lower floors of tall buildings where the concrete is at its thickest.

The PC390HRD–11 is the latest in Komatsu’s range of heavy duty demolition machines. According to the company, it brings “best in class” working power to the 50 t machine sector, can be configured in as many as six different working arrangements, can carry a 2.5 t demolition tool to a height of 26 m (85 ft), and can also work with a 4 t demolition tool up to 15 m (49 ft).

Komatsu’s PC390HRD-11 can be configured in six working arrangements

Komatsu added that operators of the new machine will work through the widest possible range with optimal control and safety.

The excavator, which is said to remove the requirement for multiple machines in the demolition process, was designed and developed, using customer feedback, by Komatsu UK (KUK) in the north east of England.

In the development process, Komatsu recognised that demolition machines must be moved from site to site as easily as possible. A lot of effort went into the transport arrangements for PC390HRD–11 and the machine was kept as compact and light as possible, without compromising durability.

The standard undercarriage fitted to the new excavator is a mechanically variable style, with a much larger footprint than the outgoing PC350LC–8 HRD, which gives the machine great stability.

The new hydraulic undercarriage option makes it exceptionally easy and quick to set up the machine on site and to reduce the transport width to less than 3 m (10 ft).

After KUK welcomed clients from across Europe to the United Kingdom for the PC390HRD–11’s official launch, the excavator created further industry excitement when it scooped the National Federation of Demolition Contractors Award for innovation.

It was also shortlisted for the innovation awards of the French Syndicat National des Entreprises de Démolition.

*Article first published in the January-February 2018 issue of Demolition & Recycling International. For details of how to receive the magazine on a regular basis, please visit www.khl.com/subscriptions