Wacker Neuson launched two new compact excavators at Intermat, Paris, and claimed to be “the most innovative trendsetters in the industry” at its press conference on Tuesday. 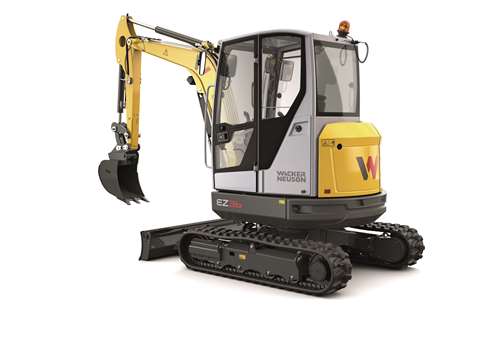 The company introduced the ET35 and EZ36, available to the global market now, and added that it would launch its EZ17e model next year.

Martin Lehner, Wacker’s CEO, said that the models would be popular to the rental market and added he expected to see increased rental demand in the coming years. Lehner also said that rental companies would increase their interest in all-electric products.

Wacker’s ET35 and EZ36 models are zero tail swing excavators with no rear overhang and are suitable for work in confined spaces. They each weigh 3.5 tonnes.

Gert Reichetseder, spokesman for management at Wacker Neuson Linz, said, “We recognised the needs of the market and are offering even more flexibility and comfort with the new 3.5 tonne models from Wacker Neuson.

“The new generation impresses with a new interior, a new design and additional outfitting options, which allow for a productive and fatigue-free work.”