Crawling to the top

Rental companies, distributors and manufacturers are saying the same thing: the track-based aerial market for North America continues to climb. 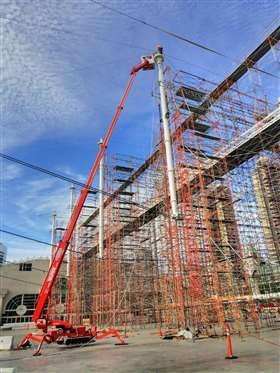 Tuepen North America, for example, has experienced a robust 12 months, according to its President, David Kesser.

“Since opening the subsidiary here in 2009, the last two years have been the largest revenue increases for us year-on-year and 2018 looks to be more of the same,” Kesser says. “Like all sectors, Teupen North America is seeing double digit increases in revenue. We are still young in penetrating all market segments across North America and as we continue to expand west we believe this growth will continue.”

The company will be opening an office on the West Coast within the next 12 months, which will provide local product support and parts distribution center. Regionally, the East Coast and Midwest are fairing better for Teupen, Kesser says, due in large part to Teupen’s decision-making to target areas where it can provide a high level of after sales service.

Kesser says one of the biggest challenges facing this industry is the number of distributors of foreign machines now coming into the market that are not compliant with all safety standards. Teupen’s machines have long been compliant with the upcoming new ANSI standards.

“Some of it is being overcome by rental companies not purchasing these units, but there are end customers who do not have the same vetting processes and purchase these units which is concerning,” Kesser notes.

However, despite the competition, Teupen North America has seen a massive change from rental in their attitude toward compact, crawler lifts.

“The understanding of the size of the potential marketplace, tremendous ROI and that Teupen’s lifts will be rented by their existing customer base, has started to take hold not only with national accounts but also with regional and local rental companies as well,” Kesser says. “For Teupen, being involved in not only the awareness of the general benefits of these lifts is important, but being on the forefront of education in the markets we sell into is important for us. To be able to make an industry more efficient while providing them with the tools and education to perform their jobs safer is the goal.”

Teupen is planning on releasing new models next year that will build on its LEO Series. The company is also in the final stages of completing its fully insulated 75-foot working height machine for the tree care and energy industries.

Positivity is echoed from All Access Equipment, the Massachusetts-based provider of CMC Tracked Lifts. Lenny Polonski, sales representative with All Access Equipment, says the market for track-mounted aerial lifts has been driven by people discovering there is a better access solution compared to traditional methods.

“Once people see one of these compact lifts working, and their amazing capabilities, they instantly realize how much faster, safer, productive and less expensive these lifts are,” Polonski says. “We have been selling these lifts exclusively for the past 14 years and we have seen the market grow immensely. Growth has been steady as more and more contractors realize that these lifts are often much faster than existing available methods.” 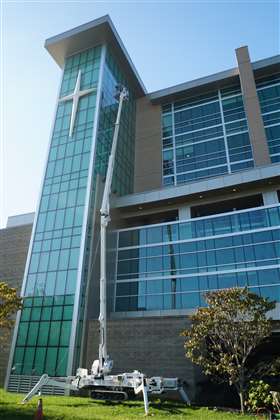 All Access Equipment will be introducing a new 72-foot tracked unit “shortly,” Polonski says. “Many new innovative lifts with even more automation will be coming in the near future.”

In the meantime, the company aims to continue its education to the market about tracked lifts.

“Our biggest issue is that we receive phone calls from people in every state, looking to rent a tracked lift that they can take themselves with a pickup truck, however their local rental store is stuck in the past with an aging fleet of dinosaurs, that are too big, too heavy and are useless for the average contractor or homeowner,” Polonski notes. “We try to highlight the key unique features of our lifts to showcase how beneficial these lifts can help companies in the rental industry and facility maintenance, because these lifts greatly increase your efficiency, profits and accessibility to jobs that other popular booms cannot.”

Alain Paré, aerial specialist for Canada’s UP Equip, says there is a fresh breath of air in the market right now.

“Regulations are tightening, workers are getting older and knowledge of the product is increasing steadily,” Paré laments. “All that, with a constantly growing economy, is a perfect environment for the crawler lifts.”

UP Equip has grown consistently over the past few years. The company was ranked as the 47th fastest-growing company in Canada in 2016 and 80th in 2017.

“The market is hungry,” Paré says. “We have already sold 40 percent of our last year’s total as of the end of February.”

UP Equip sees its equipment being used and shipped to the middle of the U.S. and the East Coast. “There is something in the Grate Lakes water that creates winning conditions for the buyers out there,” Paré jokes.

While most of the news coming from the company is positive, Paré does note there are still challenges with explaining the differences between compact, crawler lifts and traditional boom lifts. He does see more interest from rental companies, however.

“The challenges [rental companies’] customers face force rental companies to look for alternatives to the me-too stock,” Paré says. “We still have a long way to go to have compact crawler lifts available everywhere, but change is coming from the end users. They need this product.”

UP Equip will debut a “major new” product later this year, but wanted to keep details under wraps until further notice.

If it’s any indication the market is becoming more attentive to these units, then it would be noted that the world’s largest aerial provider, JLG Industries, Inc., debuted a new compact crawler boom (CCB) – the X1000AJ – at The Rental Show. 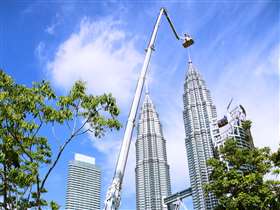 The X1000AJ features 56 feet of up-and-over reach and 54 feet of horizontal outreach, plus a 105-foot working height. It also boasts a 500-pound unrestricted platform capacity, allowing operators to bring more materials to the work area, fulfilling the fundamental need for a safe and productive work environment.

“We are excited to bring the X1000AJ to market,” said Randy Marzicola, director, channel development for JLG Industries, Inc. “Our innovative line of CCB’s has rapidly expanded with this newest model addressing our customer’s wants and needs. By offering a full range of CCB machines we reinforce our focus on developing equipment solutions that meet the requirements of our customers and their customers.”

The X1000AJ’s boom includes a new articulated column design, giving operators the ability to work flush with the surface of a structure. Smart technology improves boom functionality by enabling multiple simultaneous movements, introducing a go-home function and by delivering 90 degrees +/- jib movement for added reach. The machine also features below-grade capabilities for those who need to complete work both above and below ground level. The lift will be available in the fall of 2018. For full specs and more information on the X1000AJ, see www.khl.com.

Absolute E-Z Up (AEUP) also offers a range of track-mounted articulating booms with working heights from 37 to 75 feet and horizontal outreaches of 23 to 39 feet. Platform capacities are 440 pounds.

“The TRACCESS track-mounted booms are the ideal lifts for both indoor and outdoor applications in a variety of industries, including construction, painting, maintenance and landscaping,” said Mike Buley, Absolute E-Z Up president. “The units are lightweight, perfect for sites with sensitive floor loads, and their compact size can easily maneuver through standard doorways.”

ReachMaster, which has long provided track-based lifts to the Americas markets, recently moved into its new headquarters in Porter, TX due to increased demand. The company is an IPAF-certified training center. 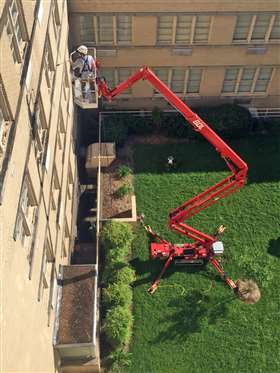 “Training is and will always be an area where the track-based compact lifts differ from the cousins (boom and scissor lifts), as they can do a lot more, and consequently take a little more effort to get the maximum out of,” President Ebbe Christensen. “That being said, all manufacturers have followed a KISS (keep it simple, stupid) trend as far as controls and while perhaps a bit harsh way to state it, keeping controls simple helps a lot.”

ReachMaster’s range of tracked lifts can reach heights between 39 to 170 feet. They represent tracked-lift brands Bluelift, Falcon and Denka.