The outlook in North Africa (defined in this article as Algeria, Egypt, Libya, Morocco and Tunisia) is generally positive after some difficult years, particularly following the events of the Arab Spring in 2011. The Arab Spring is the term used to describe a series of protests and revolutions which began with the Tunisian revolution and spread to numerous other countries in the region.

A recent report from BNC Project Intelligence has estimated that the construction industry in North Africa has projects worth US$473 billion currently in development and that, since 2011, the GDP (gross domestic product) of the region has grown at around 20%. However, this growth has by no means been shared equally across the different countries in the region.

It goes without saying that political instability is one way to severely curtail investment from the construction sector. While a degree of calm has returned, the region still has tensions bubbling under the surface and there are vast differences from country to country in this region, in terms of political stability, unemployment, construction projects and GDP.

Information provided by IHS Global Insight shows that in 2017 GDP growth in Libya alone reached 20%, with the other countries in the region hovering under the 5% mark. Looking ahead to 2021 and it is estimated that Libya, unsurprisingly, will not be able to keep up this staggering growth, with its GDP increase expected to drop to 5% by 2021, the same rate as Egypt, the region’s traditional powerhouse. 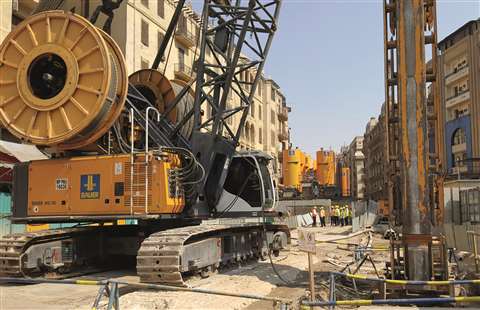 The construction industry’s future in Egypt looks strong at the moment, partly due to the economic program of Abdel Fattah el-Sisi, who has been President of Egypt since 2014.

The President has placed a strong emphasis on stimulating economic growth through major infrastructure projects, which has been helped by foreign investments. For instance, in 2016 China announced plans to invest EGP152 billion (US$15 billion) into developing the country’s infrastructure. Indeed, in 2017 the Egyptian Parliament passed the New Investment Law, which, among other things, provides tax incentives and guarantees specifically designed to attract more domestic and foreign investment into the country.

The plan to build a new administrative capital in Egypt, 45km to the east of Cairo, was first publicly announced in 2015 and the first stage is expected to be finished by 2020. When completed, the Egyptian Parliament, Presidential Palace, supreme court and central bank will be moved there. The initial cost of the first phases of the infrastructure build is expected to be $4.5 billion and the new capital will be built over 714km², roughly the same size as New York City.

Much of the money for the project will come from China, with the China Fortune Land Development Company (CFLD) initially providing $20 billion for the currently unnamed city. The China State Construction Engineering Corporation (CSCEC) has signed an agreement to build a Central Business District (CBD) in Egypt’s

new administrative capital. The deal is part of the two countries’ bilateral cooperation within the framework of China’s Belt and Road Initiative.

Another large-scale construction project in Egypt is the plan to upgrade the rail system. In March 2017, Egypt’s Transport Minister Hesham Arafat said that the country was targeting up to $810 million of new investment in new rail and metro projects. The bulk of this investment has been earmarked for three high-speed rail lines running from Luxor to Cairo, from Alexandria to Cairo, and from Luxor to Hurghada, which will have a combined value of $731 million.

The Cairo Metro line is a $3.5 billion project, which is expected to significantly ease traffic in the busy capital, Cairo. Work began on a new, third metro line in 2008, and one of the companies involved was Bauer Egypt, which was involved in numerous phases. In September 2017, Bauer Egypt started the specialist foundation engineering work for Phase 3, which will run below the river Nile and include six underground stops.

A 250,000m² diaphragm wall with a depth up to of 83m and about 180,000m³ of underground sealing is to be constructed for this purpose. Four BC 40 trench cutters and one BC 30 cutter unit mounted on Bauer MC 128 and MC 96 duty-cycle cranes are being used. The underground sealing element will be executed using five BG 28 drilling rigs with extended masts for drilling up to 83m. This work is expected to be completed in April 2019. 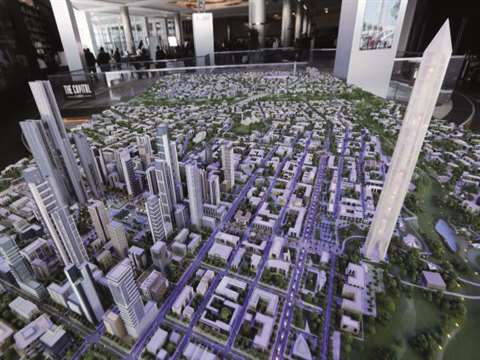 An artist’s impression of the new Egyptian capital – the initial cost of the project has been put at $4.5 billion

Morocco’s desire to become one of the top-20 tourist destinations in the world by 2020 has had a positive effect on the construction sector. This can be seen in the building of giant hotels, such as the $300 million Anantara Al Houara Resort. The country’s desire to increase tourism is not the only driver though; with the urban population growing at 4% per year, the government has begun a New Cities program that is aimed at creating 15 new cities by 2020.

As in Egypt, transport spending is high on the list in Morocco, and the country is aided in this respect by a €300 million (US$371 million) loan from the African Development Bank to support the investment plans of Office National des Chemins de Fer (ONCF), the national rail company.

ONCF is investing heavily in Morocco’s transportation infrastructure, with $13 billion due to be invested by 2035. Plans include the construction of almost 2,000km of major rail lines linking the country’s largest cities, in addition to urban and high-speed rail.

Elsewhere in the country, Chinese and Moroccan contractors have agreed to work together to build Africa’s tallest skyscraper in the Moroccan capital, Rabat. China Railway Construction Corporation (CRCC) and Travaux Generaux de Construction de Casablanca (TGCC) will partner on the project, which is being developed by Morocco’s BMCE Bank of Africa.

At a height of 250m and an estimated cost of $375 million, the 55-storey Rabat Bouregreg Tower will incorporate ecological and sustainable design concepts. As well as having a number of luxury apartments, the tower will host hotels and office space, while the lower structure will include prominent public spaces for the arts and culture.

On completion, the tower will be the centrepiece of a wider project, to develop the Bouregreg valley in Rabat, which is in itself part of the 2014-2018 Integrated Development Program dubbed ‘Rabat, City of Light, Moroccan Cultural Capital.’

Partly due to its geographical position located near Europe, many governments seem eager for Tunisia to succeed and, as such, the country has received loans from numerous countries, such as Germany, Quatar, France, and Saudi Arabia.

The country has also received support from international institutions. For example, the European Investment Bank (EIB) has pledged €250 billion (US$309 billion) of support by 2020, which includes specific projects, such as a €150 million (US$185 million) loan agreement for investment in modernisng the country’s roads, especially in Tunis, the capital and largest city.

One of the government’s key projects was actually launched in 2016: Tunisia 2020, which aims to develop several projects in transport, tourism, energy and utilities, education, healthcare, communications, industry, and housing.

As well as the above investment, the Tunisian government recently announced that a new airport that meets all international standards will be built by 2030. The estimated cost of the project is TND2.05 billion (US$840 million). The airport will be located in the province of Bizerte, about 80km north of Tunis and, when completed, will be the tenth in the North African country. 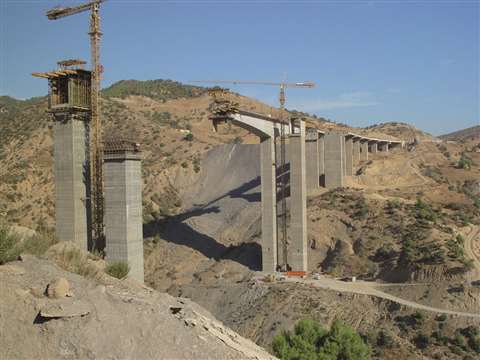 Now mostly completed, the Autoroute A1 in Algeria cost an estimated $11 billion

Despite investing huge amount of money into the construction sector in the past, Libya is lacking in skills in this sector and is therefore particularly reliant on foreign workers, something that is made problematic by security issues. Towards the end of 2017, representatives from three South Korean construction companies visited Tripoli to assess whether conditions have sufficiently changed in the country to permit them to restart work on three power stations.

Hyundai and Doosan were building the 1400MW Khaleej Power station at Sirte - work on which began in 2007 - Daewoo was building the power station at Zueitina, and Hyundai was expanding the Tripoli West station. The projects were said to be worth LD4 billion (US$3 billion). However, the companies pulled their workers out in mid-2014 because of security concerns and, at the time of writing, have not yet returned.

Chinese companies have been involved in many projects in North Africa, with Algeria being no exception. Chinese firms were involved in the construction of the Autoroute A1, a 1,200km highway that cut across the country from east to west.

Most construction is now completed on the project, which it is estimated cost approximately $11 billion. However, some work is still taking place, and another Chinese company, CITIC Construction, has been awarded the main construction contract for the Algerian East-West Highway, a part of the Artery Motorway Section in Batna.

The project is located at Bourdj Bou Arreridj near the Tunisian border and will include the construction of the remaining 84km of the eastern section of the East-West highway. The project is expected to take about 36 months to complete. 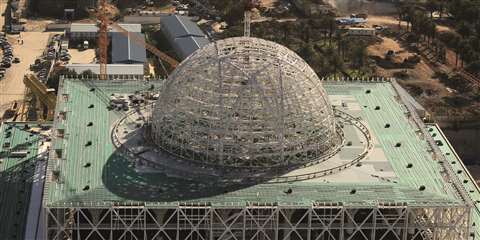 A current project is the building of the Grand Mosque of Algiers (Djamaa El Djazair), a $1.3-billion project that will become the world’s third largest mosque, after those in Mecca and in Medina, Saudi Arabia, when completed.

China State Construction Engineering Corporation (CSCEC) were awarded the contract several years ago, and the project is nearing completion. Work on the building began in 2012 and it was originally expetced to be completed in 2017, but the project has suffered delays.

The building, which will be 265m high, will be visible across Algiers, the capital of Algeria. It has been reported that workers are currently on 24-hour shifts in an effort to finish the project, which has over 2,300 workers, engineers and construction managers on site.

The mosque will include several independent buildings over 20ha, with a total built-up area of more than 40ha.

It was said that the mosque will have a mechanism capable of absorbing earth movements, which can decrease the effect of a magnitude 9 quake to that of a 3.5 tremor.

One of the tasks was to finalise coating on the dome – to perform the job required the installation of a suspended platform 33.6m in the air, something that the deputy director of the planning department, Cao Qi, called, “a technical prowess in the field of construction and civil engineering.”

Djamaa El Djazair will also be equipped with a conference room, a museum for Islamic art and history, a research center on the history of Algeria, the Koran House center, commercial buildings, a restaurant, a library, an amphitheater, a plaza, underground parking with capacity for 7,000 cars, and numerous outbuildings.