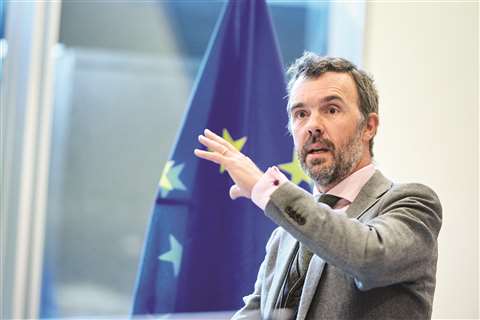 CPE president Dr Heimo Scheuch, CEO of Wienerberger, thanked de Meeûs for the two years he has already served as internal auditor and his continued engagement in the association on behalf of the industry.

An environmental engineer with over 20 years’ experience in senior positions in the environmental management, infrastructure, waste and construction materials industries, de Meeûs specialises in the integration of political and regulatory intelligence in the business decision-making process.

He works across a wide range of topics, focusing on energy and climate, circular economy and resources, sustainable construction and the sustainable development agenda.

Currently, de Meeûs is responsible for LafargeHolcim’s public affairs and governmental relation function. In this capacity he supports the group’s management teams and their operations in tackling and integrating the regulatory agenda across all relevant regions. His role includes conveying a leading international voice and positioning the group on relevant external forums while dealing with public policy issues in Brussels.

Before taking on his current position, de Meeûs was responsible for Holcim’s European government relations. Prior to that, he was deputy representative to the EU Institutions for Veolia Environment.

Scheuch and de Meeûs will work together over the next 12 months before Scheuch hands over the presidency in June, 2019, after two consecutive mandates at the head of the association.