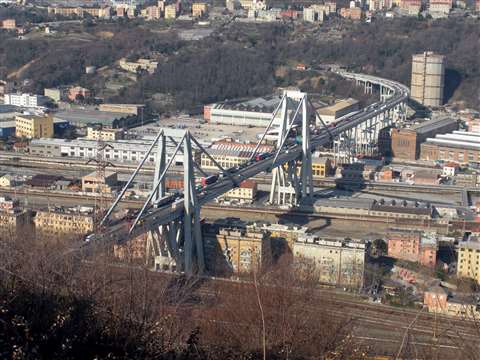 The Morandi Bridge before the recent collapse of the central section

An 80m section of the Morandi Bridge near the city of Genoa in Italy has collapsed.

The bridge is part of the A10 motorway, which is a major route to the Italian Riviera and to France’s southern coast, so the traffic would have been heavier than usual with many Italians travelling on the eve of a public holiday, Ferragosto.

Reports have suggested that one of the towers holding up the suspension bridge gave way in stormy weather, causing a section to fall primarily onto rail tracks 90m below.

Italian transport minister Danilo Toninelli said it was likely to be “an immense tragedy”. So far, 11 people have been confirmed dead.