Excavators: Weighing up the options

Reithelshöfer is one of the leading medium-sized companies in Germany’s Franconia region in the south of the country, and the excavator developed by Liebherr-France SAS has an operating weight of 75 t, including tool attachment, and an engine power of 200 kW or 272 hp. It complies with Stage IV / Tier 4f emission standards. 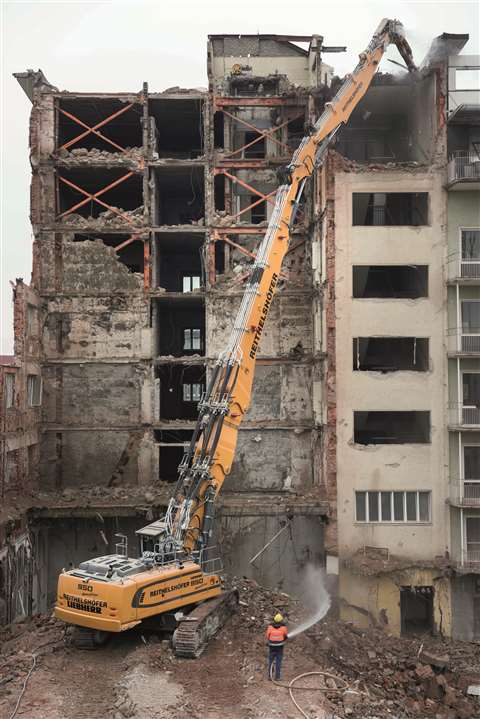 Liebherr reaches out to take down Nuremberg post office in Germany

According to Liebherr, purchasing from it gives customers the option of having a crawler excavator custom made. Additional equipment and attachments can be included in the specification so every machine produced is tailored to the needs of the individual customer. For example, a special attachment to give the R 950 Demolition crawler excavator a working height of up to 29 m (95 ft) was developed at Liebherr’s Colmar production site.

The machine already has 1,100 operating hours on the clock and is in operation for up to 10 hours a day.

For Reithelshöfer, excellent quality, innovative technology and a high comfort level were the key criteria in its purchase of the Liebherr machines.

The company previously owned excavators from other brands, then changed to Liebherr for reasons such as the operational safety. Even before the decision to purchase the new demolition excavator, which has been deployed in Germany since July 2017, other competitor machines were eliminated due to inconclusive test results.

The sprinkler system for the demolition equipment ensures low dust generation and a better view during demolition work.

The company, based near Koblenz, specialises in equipment and tools for the demolition industry. Gernot Tomaschäfsky, founder and owner, first saw the 340F UHD at Bauma in 2016, when Caterpillar launched its new demolition model.

He purchased the excavator from local Cat dealer Zeppelin Baumaschinen.

Engineered for high-reach demolition work, the 340F UHD excavator has up to 22 m (72 ft) of vertical pin height and can handle loads up to 3.6 t at a 15 m (49 ft) horizontal reach. A boom coupling system allows to quickly configure the front to the task.

“We wanted to offer our customers full flexibility,” said Gernot.

“It is especially important when a motorway bridge has to be demolished overnight or when reinforced industrial buildings and high residential flats need to be efficiently dismantled and disposed of.”

DSW Demolition, a contractor founded in Cornwall in the south west of England three years ago, has used Hyundai excavators to help establish itself in the local area.

Managing director Darren Shrigley, who formed the company, takes up the story. 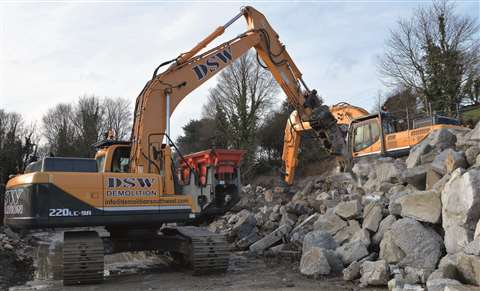 “In early 2016 we won a contract to demolish the iconic Ponsmere Hotel in Perranporth. This job gave us a great start and involved the removal of asbestos, internally and externally, the complete soft strip of 80 bedrooms, bars and recreational rooms and the salvage of some 2,000 sq m (21,500 sq ft) of timber floorboards.

“Of course, to tackle this job I needed machinery, so I got in touch with our friends at Molson Group, Jonathon Wilson and his son Tom who agreed to hire me a 20 t Hyundai hydraulic excavator. We hired the Hyundai for five to six weeks and I really liked the machine so decided to purchase it rather than hire it any longer. This job was the catalyst we needed to kick start the fledgling business and we haven’t looked back since.”

Shortly after the hotel job the company won a contract to work for Imerys, the French owned company which runs the China Clay extraction business in Cornwall, and a period of rapid expansion followed with investment in more machines and an increase in the number of staff.

The new employees included experienced people who had served with Darren’s father’s company, DRS Demolition, which had closed in 2015, and younger individuals coming to the industry from the waste recycling sector in search of a new challenge. Generally they start on the smaller scale demolition projects while taller buildings are taken down by Darren and another ex-DRS man, Nick Southall, where the newer recruits can handle the job safely.

Some of the machines in the fleet are second hand units which have been refurbished, if required, to a very high standard by local Hyundai dealer Molson. The latest addition, is the 380LC-9A model, is working on a site in the town of St Austell.

The 380LC-9A has been teamed up with a Sandvik crusher which are both working on the site of an old China Clay drying works not far from St Austell, work here has been ongoing for some two-years and initially saw the company taking down old sheds that covered the area. Some asbestos had to be dealt with first, this task was performed by sister company ASW Environmental, and the timber roof was stripped down for recycling. The 380LC-9A and a 220LC-9A are now engaged in dismantling some heavy duty concrete structures which will be fed through the crusher for re-use as hardcore.

“Our business has come a long way in a short period of time,” Darren said.

“In addition to the plant, we are now running a couple of trucks with hook-loaders and around half a dozen vans.

“Going forward, I feel that the crusher would benefit from having a new wheeled loader to work with it. That will potentially be from the Hyundai stable and possibly another 40 t class excavator will join the fleet. It is an exciting time for the business and I am looking forward to pushing it on.”

Netherlands-based demolition and recycling business AC Stolwerk Sloopwerken has purchased the first Hitachi Premium Used excavator to work on a range of projects around the city of Breda situated in the province of North Brabant. 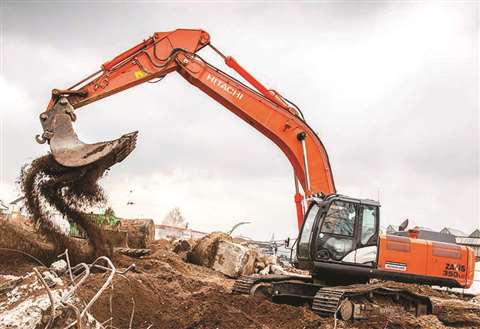 The demolition and recycling firm, which also specialises in the removal of asbestos, said it bought the ZX350LC-5 due to the favourable costs associated with the machine and the excellent coverage provided by the warranty included within the Premium Used package.

Established in 1953, Stolwerk has had a long and successful working relationship with Hitachi Construction Machinery (Europe) (HCME) spanning four decades.

Owner Thierry Stolwerk – the third generation of the family to run the business – bought the excavator to load the company’s mobile crusher, which is used to recycle demolished materials. However, Stolwerk is so busy that the versatile machine has also been commandeered for other projects since it arrived at the end of 2017, such as its first job on the site of a 1920s factory.

After deciding on the ZX350LC-5 as the most appropriate machine for the capacity of the crusher, Thierry then considered the benefits of purchasing a model with 3,000 working hours through the Hitachi Premium Used programme.

“When I was offered the guarantee of a high-quality machine with an approved Hitachi warranty, I had to assess how this would benefit our company’s operation.

“The price of a used machine was obviously advantageous and offered a 36% saving over a new model. In addition to the advantage of having less depreciation, I also had the peace of mind of fixed running costs from the maintenance contract.

“When I inspected the machine for the first time, I could feel the quality of a fully serviced machine – it was like new.

“I was also impressed that HCME was able to deliver the machine within a week, complete with a quick hitch, which is essential for the number of attachments we use in our demolition business.”

Operator Cees Diepstraten who has been with the Stolwerk company for 25 years, said: “On this site, I use the machine for sorting the demolished materials and loading our trucks with piles of rubble, wood and metal. It’s very stable for working with such heavy materials.”

Centrocar, the authorised dealer for the Doosan range of construction equipment in Spain, Portugal, Angola and Mozambique, has supplied 12 new excavators to the state-owned agricultural and environmental contractor, Tragsa Group.

The DX255LC-5 is powered by a six-cylinder Doosan DL06P diesel engine providing 141 kW (189 hp) of power and equipped with the necessary auxiliary hydraulic lines for hydraulic quick coupling, rotation, tilt, opening and closing of attachments and working with hammers.

For the Tragsa Group, safety is always a key factor that is reflected in its specifications and for this reason, both types of Doosan machine are equipped with all the safety measures needed to protect against overturning or falling objects, carrying fuel for transport by road, fire extinguishers, and all the excavators are equipped with the DoosanConnect system, allowing managers to observe the machines remotely in real time, monitoring the performance of the equipment, fuel consumption or helping to detect any problems that may occur. Doosan said the system ensures excellent fleet control in addition to providing the precise location of the equipment.

All the equipment has automatic centralised greasing to prolong the operating life of components, to prevent excessive wear and tear that might be caused by the lack of greasing at key points in the machines.

The 12 units are equipped with Geith hydraulic quick couplers and buckets.

Taken from the July-August 2018 issue of D&Ri. To see the full article, including additional images, or to receive the magazine on a regular basis, please visit www.khl.com/subscriptions