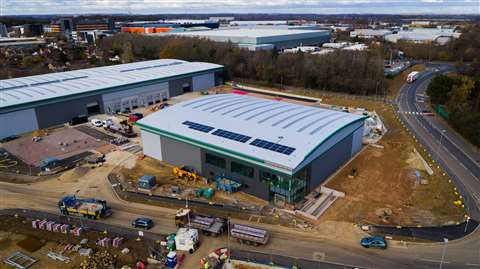 Riwal UK is preparing to open a major new depot.

It has leased a new 21,000 sq ft unit with 19,000 sq ft external space in Prologis Park Hemel Hempstead, in Hertfordshire, and is due to open the new depot in the second quarter of 2019.

Mick Ledden, country manager for Riwal UK, part of the Netherlands-based Riwal Holding Group, said: “Prologis Park Hemel Hempstead’s strategic location, close to the M25 at the base of the M1 corridor, will help us deliver a fast, responsive service for our customers across North London, Heathrow in the west and throughout the Home Counties.

“The new building gives us the extra space we need to meet our expansion targets. Its very good sustainability features are also aligned with Riwal’s strategy of delivering powered access services that are cutting edge, energy-efficient and support sustainable global development.”

Operations will be configured according to the Riwal Way – an internal approach that aims to create standardised, repeatable systems for delivering quality services across Riwal’s global operation. Over the last six months, the Riwal Way has been used to double the size of the London South depot in Kent, which will share responsibility for serving Riwal UK’s customers in London and the South East.

Riwal engineers were the first to convert JLG super booms to 100 per cent electric power. Riwal Netherlands has announced it is converting its diesel fleet to cleaner-burning gas-to-liquid fuel.