No more than two or three miles from where you are sitting, Irish rock band U2 are in the middle of four concerts at the end their latest world tour.

Thirty years ago they were taking over the world as the Joshua Tree album catapulted them into the stratosphere, eventually selling 25 million copies. 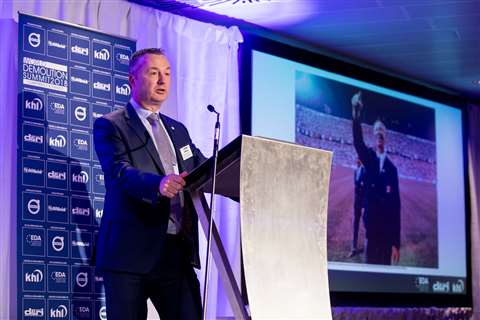 Patrick Tinnelly speaking at the World Demolition Summit, with Ireland’s hero Jack Charlton in the background

The Joshua Tree was a journey through America and told the story of the gap between the ideal of the so called Promised Land and real life for the average person.

But if U2 wanted to see a country struggling to live up to its ideology, all they had to do was take a trip around Ireland.

For decades after independence in the 1920s, Ireland was one of Europe’s poorest countries.

A change of government in 1987 is regarded by some as the turning point, but any Irish person alive then knows the real reason.

Jack became manager of the Irish football team in 1986, recruited second and third generation Irish players alongside home grown talent, and in his first major tournament Ireland reached the Euro 88 finals in Germany. There was an exodus of fans, many of whom had never been out of Ireland before. Suddenly, the inferiority complex was thrown off.

After a 1-0 win against a star-studded England, the entire country erupted and a Celtic Tiger cub was born!

With further success at the World Cups of 1990 and 1994, the new confidence was typified by the flamboyant Michael Flatley strutting across the stage during an interval performance for the Eurovision Song Contest.

That was Riverdance, it spawned a global phenomenon, and Ireland’s economy began an incredible 14-year journey. Unemployment fell to under 4% in 2001; net immigration reached over 60,000 per year by 1996.

There were half a million more jobs in 2001 than in 1994 and GDP grew on average by more than 8% in the same period. Foreign direct investment literally flowed in, increasing from about 2% of GDP to almost 50%. Multinationals used Ireland as their European export hub.

However, research and development still took place in the USA. Raw materials were flown in, assembled or altered slightly, and then flown on to their European market. An estimated 80% of the money generated by the multinationals bypassed Ireland completely.

As we now know, the second phase of the Celtic Tiger was based on debt-financed domestic demand.

Like Jack Charlton’s football team, recruits from outside Ireland were key to success. Employment in construction grew to 13% of the labour force, mostly to service the demand for houses. Foreign borrowing of the six main Irish Banks rose from €15 billion in 2004 to €110 billion in 2008.

And when the crash came in 2007-08, it was spectacular. Ireland, like other countries, was heavily exposed and grossly unprepared.

So, how is it, that we at Tinnelly Group, and others like us, survived? What is it that we did, or did not do that allowed us to still be in the game when the tide turned?

Before 2001, we had mostly been involved in small to medium scale demolition with maximum contract values of around €300,000 ($340,000). The multinationals that came to Ireland in phase one of the Celtic Tiger were locating to greenfield sites on the periphery of the larger towns and cities. While general construction benefitted, there was relatively limited scope for demolition.

Opportunities for growth were at smaller scale developments driven by local clients and builders. This was before the likes of Google, Facebook and Linkedin saw the attraction of locating to city centres.

At the turn of the millennium, we won more substantial projects as urban regeneration driven by Irish developers and financed by Irish banks took hold. Contracts ranging from €750,000 to over €1 million ($850,000 to $1.13 million) became more common.

Buoyed by contracts that included substantial volumes of scrap with high prices high, we had the best years in our history in 2007 and 2008.

Efficiencies also increased, with turnover and profit per employee going up. Before 2008, we employed labour directly. Investment in plant also increased, but crucially, lease and hire purchase levels were kept low.

We bought much of the new plant outright. This would be crucial as to how we were able to cope with the downturn.

At all times during this period, we had a policy of keeping creditors paid. It was rare for any invoices to be older than 30 days. We dabbled in the property market, but at a relatively low level, and nothing that would eventually hurt us. Even so, the following year, turnover plummeted by almost 50%.

Scrap had always traditionally been regarded as the cream on demolition projects, sometimes the difference in profit and loss.

Prices plummeted in 2008 to the point that scrap trading virtually stopped, with steel mills that a year earlier struggled to meet demand closing across the world, particularly China.

Prices gradually recovered but have never returned to those heights.

Less work meant less labour was needed. Numbers fell by 30%, but we took the decision to keep the core work force together. We rotated the workforce on and off temporary layoff and managed the redundancy situation well. We only secured a few plant intensive projects, and fortunately most of the plant was paid for.

And we were able to take on strip out works and a series of internal alteration projects.

Our asbestos division was busy with a decent size measured term contract with an education board.

With the United Kingdom economy recovering faster, we took on a couple of contracts in Great Britain for local Irish contractors, as well as several others in Northern Ireland.

We made a loss in 2009, hovering on the break-even line for the next four or five years, but there was still money in the bank from the good years.

We continued to source work north of the Irish border, and again had several contracts in Britain, but a substantial portion of our work was still in the Republic of Ireland.

We chased the work and went where ever we needed to, which cost more with accommodation and subsistence, and the bottom line took a hit. However, at no time did we price at below cost.

A series of substantial jobs at Intel in Leixslip and for Diageo at the St James Gate Brewery in 2012 and 2013, along with a further project as part of Ballymun Regeneration – one of the largest regeneration projects in Europe – helped us keep our heads above water.

Dublin city centre went through a refurbishment in the following couple of years.

Vacant or previously unfinished buildings that had been dormant as a result of the crash were refreshed, with many undergoing a changed of use. Large scale internal alterations, – cut and carve projects as we term them – removal of stair and lift cores, structural floor openings with substantial temporary works- were a large part of our work.

Our investment in plant during this period was mainly in Brokks and cutting equipment reflecting the work that was being carried out.

Employee numbers and turnover continued to rise during this time, but margins remained tight. Turnover and profit per employee was down on the good years, but this was no surprise as the market was very competitive and large scale plant intensive demolition was still relatively scarce. Cut and carve projects remained a feature of 2015, but we also saw the return of several larger scale city centre demolition with several €1 million plus projects commencing. By 2016-17 turnover had returned to levels not seen since 2007-08, with the current year also on par. Profit was lower than those years, but was sustainable.

Employee numbers are approximately 20% higher, with agency labour accounting for almost 10% of the workforce, highlighting the labour shortage across the construction sector.

We are using subcontractors more than 10 years ago, but this is due to being able to subcontract out specialist packages like saw cutting and coring, and we expect our end of year results to further build on the past couple of years.

As we look forward to – hopefully – continued growth, there are a number of challenges for all of us in the industry and the wider economy moving forward.

The increased cost of labour, with the introduction of the Sectoral Employment Order (SEO) in October 2017 that introduced what was essentially a minimum wage in the construction sector. Everyone other than new entrants to the industry are being paid at least 24% more than just over a year ago.

A shortage of labour means the actual rates being paid are well in excess of the SEO, resulting in an increase in labour costs of over 30% of what it was.

Many landfills are now reaching their annual quotas by the middle of the year, and although there has been some increase in these quotas, waste operators are still struggling.

The Environmental Protection Agency’s current stance on crushed concrete remains that not only is all material coming off the belt of a crusher a waste, but that it will always remain so. It does not currently fall into the correct category for End of Waste status. It is taking the EPA up to two years to process Article 27 notifications for crushed concrete.

The past 10 years have been a bumpy road.

My father’s advice during the good times was: “This won’t last forever, you know!”

His advice during the recession was: “This won’t last forever, you know!”

As we move further away from the worst recession since before the Second World War, we will all become more forgetful. We always do. But economics is cyclical, and another recession will be along at some point.

So get your house in order now, when you can. We need to be prepared for change and be able to adapt when needed.

Nothing lasts forever, you know! 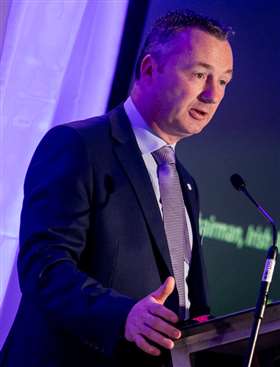