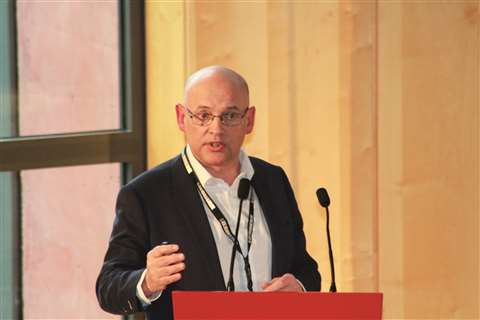 David Collett is president of the European Association of Abnormal Road Transport and Mobile Cranes – ESTA – and he is managing director at specialized transport company the Collett Group in the UK. He told ICST about what is coming up in 2019 for the association and similarly for the industry.

This year, 2019, is probably going to be one of the most notable since ESTA – the European Association of Abnormal Road Transport and Mobile Cranes - was formed more than 40 years ago.

To be clear, the industry is not going to see ESTA change radically overnight. None of us on the ESTA Board have a magic wand. But we are engaged in an on-going process of significant and important developments. Steadily and methodically, we are building on our successes, expanding our influence, making new contacts, adopting an ever-higher profile – and in the coming months we hope that several major projects will come to fruition.

As always, central to our philosophy and all our work is safety. We are continually looking at how our industry’s practices can be improved, and how we can work as effectively as possible with our clients and suppliers.

Within that general approach, there’s a range of different and important projects, all of which, if successful, will improve the safety and efficiency of the industry.

Three major examples are the European Crane Operators Licence; the new best practice guide for the safe transport and erection of onshore wind turbines; and our ongoing campaigns to harmonise heavy transport and abnormal load regulations and create heavy transport corridors across Europe.

How do you see the state of the wider market, especially given the political uncertainties?

Our clients need certainty if they are to invest, so the global political and economic upheavals at present can only be a cause for concern. Being from the UK, I am acutely aware of this and at the time of writing it was not at all clear how the Brexit issue would be resolved.

In addition, in the UK we are seeing doubts about the future of some major schemes. Hitachi have pulled out of the Wylfa nuclear power station project and a number of politicians are raising concerns about the cost of HS2, the new high-speed railway line. What is more, we have seen some major European companies focusing on other parts of the world not Europe or the UK. I think we are in a period of “wait and see.” The next six months are going to be very important for Europe as a whole, and the UK in particular.

Low margins have been a problem for ESTA members for many years. How can they be improved?

Margins have been an issue for as long as I can remember. The industry is simply not as profitable as it should be and that impacts our ability to invest and to train the next generation.

One of the problems is that in the past many clients did not really understand what we do. In my more optimistic moments, I think that is beginning to change. I have seen some signs that transport is moving up the agendas of our clients as they realise that it is a fundamental part of the planning of any project.

Obviously, the earlier we as an industry are involved in the process, the safer and more efficient that project is likely to be. As I said, I think we are seeing signs of change in that regard – I hope I am right.

We work in a tough market in a tough industry and I do not believe that there is any simple solution to the issue of low margins. It is all about making small gains to steadily improve our performance, increase our efficiency and professionalism and make sure that our clients understand that cheapest is often not the best value.

Plans for the European Crane Operators Licence appear to be making good progress. How is it being received by the industry and your clients?

ECOL is without doubt the biggest and most complex project ESTA has ever undertaken. ESTA director Ton Klijn and the ECOL working group deserve a huge vote of thanks from the entire industry. It has already been a fantastic achievement to get it to the stage it is at today.

We are now in the position where the final trials are being conducted and support for the project is growing among the crane manufacturers, among ESTA’s member associations and among major European and global companies, for example, Mammoet and Sarens.

The focus now is garnering support among our industry’s major clients – especially in the oil and gas, wind energy and major construction sectors. The signs are already good with strong expressions of interest from many companies.

One client recently told us, ‘My industry needs operators we know are properly qualified. Across Europe, it would be so much easier – and safer – if there was a clear and common language and understanding of the qualifications and skills required to operate a crane.’

Safety during the transport and erection of onshore wind turbines has been a growing concern among ESTA members. How are plans for a new best practice guide progressing?

We are a little behind schedule, but not by much, and only because of problems arranging meetings, not because of any fundamental disagreements. We should have the first draft ready before the summer.

This is another project that has taken a huge amount of effort and commitment. Importantly, it has had the active support of many of the wind turbine manufacturers themselves through the involvement of VDMA Power Systems, part of the German engineering federation.

As readers will know, safety concerns have been growing among our members with the development of bigger turbines with greater hub heights and the increasing use of hard-to-access sites with difficult ground conditions. To get the debate going, we held a series of conferences in Hamburg which were the springboard for moves to produce a new best practice guide.

Today, the scope of the document has been agreed, a lot of the engineering work has been done and our next meeting with our colleagues at the turbine manufacturers should see us take another big step forward.

The guidelines are expected to include subjects that include common dimensions and standards for access roads, contractual considerations for operating companies and the methods of calculating the ground bearing pressure and construction features for crane pads.

As I said, we are getting there. The first draft should be out soon and the final document later this year. 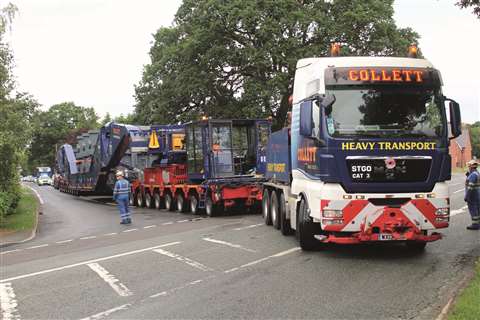 Collett & Sons delivering at Willenhall in the UK

ESTA’s transport members have long been frustrated by the number of petty and different regulations across Europe, along with the poor state of the continent’s infrastructure. Are there any signs of improvement?

In all honestly, it is a slow process, but we are making progress. We are working to raise our profile and influence with the European Commission and international road transport authorities. Last year we joined the IRU – the international road transport industry association – to help us in that aim and we will be taking any opportunity to lobby authorities directly whenever the chance arises.

We have launched an initiative to persuade European authorities to harmonise standards governing lighting and marking on heavy transport. The 11-strong group behind the work is chaired jointly by ESTA’s Section Transport president André Friderici, technical director at Friderici Special and vice president Iffet Türken, executive board member of Kässbohrer.

They have been collecting and analysing information about the current rules in force across Europe on cargo and vehicle marking, rotating beacons, side marker lighting and conspicuity marking. At the same time, they have started drafting what a common ESTA position might look like with the aim of eventually lobbying national associations and their governments to amend their current rules and regulations, creating a common European position.

There will be more news on this work in the near future.

In addition, we will have another go at persuading more authorities to adopt the European Best Practice Guidelines for Abnormal Road Transport, first published in a European Commission Transport Directive back in 2005. The directive contains SERT, the Special European Registration for Trucks and Trailers, and was intended to reduce paperwork and bureaucracy.

Finally, we are pressing the European Union and other transport authorities to agree heavy transport corridors throughout Europe. At the request of NATO, the EU is already looking at plans to help military equipment move around more easily and we hope that these routes will be open to heavy transport.

I have long said that from the point of view of many ESTA members the single market is more fiction than fact, such is the huge variety of different regulations we have to deal with and the poor state of much infrastructure.

It is a situation we have been campaigning on for many years. There is a huge amount of work underway and these are not battles that can be won overnight – but I am sure that in the end we will prevail. 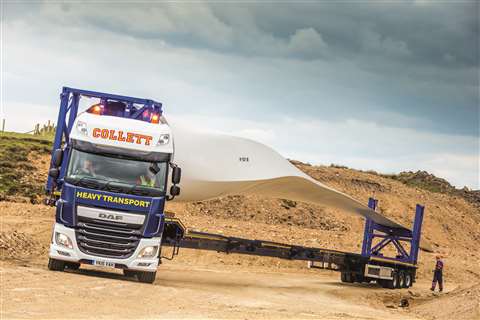 Join us in Munich

Networking remains central to ESTA and our members – through the section meetings in the spring and autumn and the hugely successful annual awards run jointly with International Cranes and Specialized Transport magazine.

In my view they are the best networking events for the whole European mobile crane and heavy transport industries and, through the awards themselves, a chance to celebrate some of our truly outstanding companies and projects.

If you have not been involved before, I strongly suggest you come along. Details are on ESTA and KHL websites.

I would like to make a direct appeal to all companies in our industry to join us in our work by signing up as an ESTA supporter.

The reasoning is simple. I believe that being active in ESTA is a very valuable experience. And the more supporters we have, the more resources we have, and the more we can achieve on behalf of the industry as a whole.

I am sure that the networking and contacts you make will help you professionally and in your business, and being involved in ESTA gives you a voice on the European issues affecting the industry today. Go to our website at www.estaeurope.eu for more details and to find out if your company is eligible, or contact the ESTA main office.