Have trophy, will travel 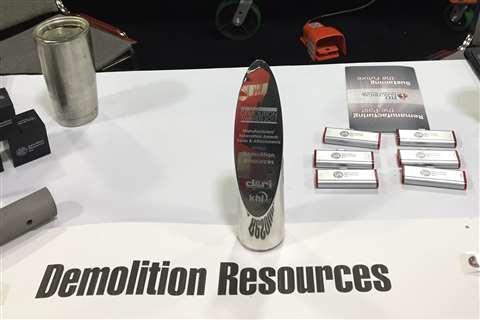 Look what we won…Demolition Resources shows off the award

But that wasn’t the end of the story for the USA-based company.

The precious silverware still travels with them everywhere they go!

Fast forward to the US National Demolition Association’s (NDA) Convention and Expo in Aurora, Colorado a few weeks ago, and there it was sitting proudly in the firm’s exhibition on show to hundreds of visitors.

Demolition Resources won the 2017 award for its Modular Light Duty Baler, launched in April of that year, which was critically acclaimed by a host of users looking for another way of tackling interior demolition projects.

Tools and Attachments is one of two manufacturer categories at the World Demolition Awards and companies looking to emulate Demolition Resources’ success have until June 30 to submit their entries.

The awards themselves take place in Boston, USA, on October 23-24 as part of the World Demolition Summit, organised by Demolition & Recycling International in co-operation with the NDA and with the support of the European Demolition Association. The headline sponsor is Volvo Construction Equipment.

More details are at www.demolitionsummit.com