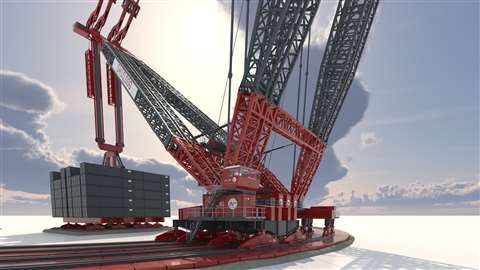 A 10,000 tonne capacity super heavy lift crane has been launched by ALE.

The UK-headquartered international heavy lift and transport specialist said the SK10,000 will be the world’s largest land-based crane. It will lift modules for the construction of FPSO, FLNG and other projects.

“The SK10,000 will allow modules to be installed directly onto ship’s hulls, hugely advancing industry capabilities for both lift weights and impact on project efficiency,” ALE said.

ALE’s next largest crane, the 5,000 tonne capacity AL.SK350, has made a series of similar lifts. The SK10,000 follows the same design. It can be erected on a segment of track as opposed to needing a full ring, ALE said. Maximum outreach is 200 metres while ground bearing pressure is designed to remain below 25 tonnes per square metre.

Commenting on the new crane, Ronald Hoefmans, ALE group technical director, said, “We not only solve our clients’ existing challenges but also look to the future in enabling them to achieve industry firsts that later become the industry standard. The introduction of the SK10,000 means individual lifts of up to 10,000 tonnes are now possible, allowing customers to build larger modules more efficiently in fabrication yards and access a highly mobile and flexible solution to lift them.”