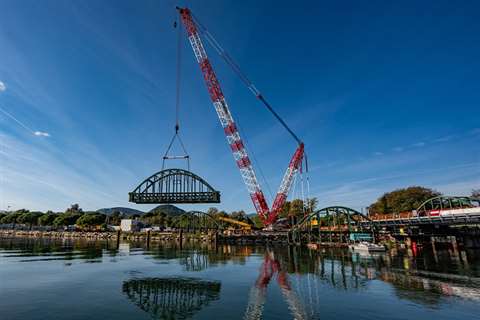 A Demag CC 3800-1 lattice boom crawler was used to dismantle an old railroad bridge in France in just 130 hours.

The French depot of Italian crane service provider Vernazza Autogru used the crawler, assisted by a Demag AC 120 wheeled mobile telescopic crance, to remove a total of eight bridge components. The operation had to be completed before a section of road was reopened to traffic.

The heavy steel parts measured up to 22 metres long, 6 m wide and 8 m tall, and weighed 115 tonnes each. The disassembly required the CC 3800-1 to repeat a specified lift pattern. The crawler removed a bridge component and travelled 18 m under load to a set down location before returning to the bridge to remove the next component.

Due to the site’s limited space and accessibility, a team of 22 operatives including four rigging technicians, a lift supervisor and a superlift supervisor were needed to complete the work within the strict timeframe.

The disassembly of the larger bridge components was carried out using an LSL configuration with a 78 metre long boom, superlift system and split tray. The 115 tonne bridge segments were lifted at a radius of 43 m, while a number of lifts for smaller bridge parts weighing 75 tonnes were undertaken at a radius of 68 m.

Vernazza said the crane’s quick assembly time, compact size and lifting capacity made it the right choice for the time-critical job.

It was the first time Vernazza had used the newly purchased crane. It took 45 trucks to deliver it from Terex’s manufacturing plant in Germany to the south of France. The crane service company received it only a few days prior to using it on the bridge.