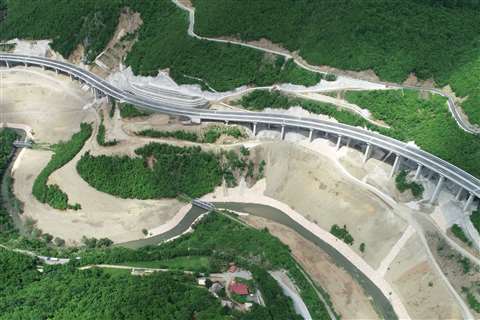 A section of the Route 6 motorway in Kosovo

US-based contractor Bechtel has completed the construction of a 65 km Route 6 motorway in Kosovo.

Bechtel worked on the four-lane motorway – running from the capital Pristina to North Macedonia – as part of a joint venture with Turkish construction company Enka.

The road is the centerpiece of a significant transport strategy for Kosovo, aimed at promoting economic growth within the country.

At the peak of construction activity, the Route 6 project was reported to be the largest employer in the country, with around 80% of its 3,350-strong workforce being Kosovan.

The new motorway will link with Route 7 (another motorway built by the Bechtel-Enka team) to form part of Corridor X – a major pan-European transport network, that is set to broaden trade opportunities for countries including Austria, Greece, Slovenia, Croatia and Serbia.

Mike Wilkinson, Bechtel’s regional general manager, said, “We are incredibly proud to have successfully completed a second key motorway in Kosovo, with our partners ENKA. At a time when many other countries are not rising to the infrastructure challenge, the Kosovan Government must be credited for their political leadership and their investment in high quality infrastructure that will provide significant economic benefits to the country, and improve the lives of all Kosovans.”