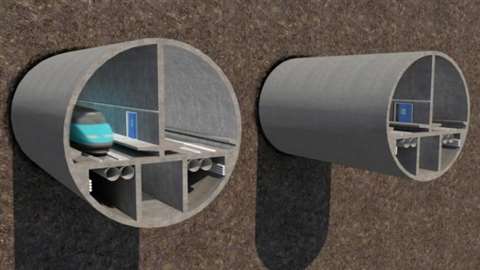 A concept image of the Tallinn-Helsinki double train tunnel.

Finest Bay Area Development has signed a memorandum of understanding with three Chinese companies, as part of plans to build an undersea train tunnel from Tallinn in Estonia to Helsinki in Finland.

China Railway International Group, China Railway Engineering Company and China Communications Construction Company will work on the final design and building of the Tallinn-Helsinki tunnel with the backing of financier Touchstone Capital Partners.

Peter Vesterbacka, co-founder of Finest Bay Area Development, said, “We are very excited to get these best in class tunnel and train skilled design and construction companies to join our project. The trust between the parties has formed through discussions and actions. The partner companies are the largest in the world in their own fields of expertise. These new partners are needed in addition to the best in class local Finnish, Estonian and other European design and construction for example there is very limited resources in Finland and Estonia in tunnel boring and highspeed train technologies.”

Construction of the project, which aims to link the two capital cities via a 100 km (60 mile) double train tunnel running beneath the Gulf of Finland, would result in the journey time between the two cities being cut from two hours by ferry to around 20 minutes by train.

Finest Bay Area Development said, ”The train tunnel will form a common metropolitan area of the capital city regions of Finland and Estonia. The new metropolitan area will be a centre of gravity between Asia and Europe when through the tunnel it is possible to travel with trains from Helsinki-Vantaa Airport to Tallinn and then onwards to Central Europe. In Finland the initiative will strengthen the role of Vantaa as a logistical hub and will enable the cities of Uusimaa region to connect better to the national transportation network.”

In March of this year China’s Touchstone Capital Partners signed a memorandum of understanding with the project’s developer, Finest Bay Area Development, to provide €15 billion (US$17 billion) of funding. The agreement in principal will give the company a minority stake in the tunnel and two-thirds in debt.

The project forms part of Beijing’s Belt and Road initiative, which aims to link China to Europe, Asia, the Middle East and Africa by land and sea.

The Tallinn-Helsinki tunnel has not yet been backed by the Estonian or Finnish governments or the European Union.