Since they are towards the smaller end of the scale in terms of equipment size, skid steers are good candidates for new technologies such as battery electric and remote control. As a result, they are increasingly versatile pieces of equipment that can be operated indoors or in hazardous environments. 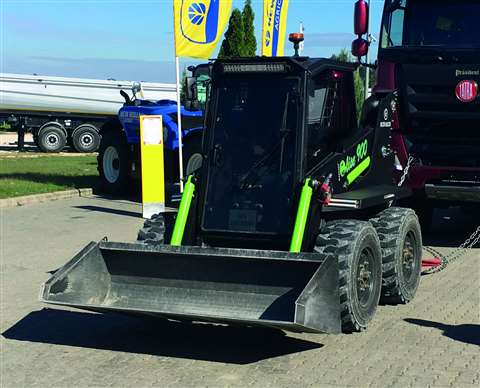 Venturing into the realm of full-electric, Slovakian manufacturer Kovaco recently launched its battery-powered electric skid steer, the Elise900. After several years of development, serial production of the model began at the end of September 2018.

The retractable battery pack on the 4.2 tonne machine is positioned in the base of the skid steer to lower its centre of gravity, thereby enhancing its stability.

On a fully charged battery, the Elise900 can work, on average, for between 5 and 6 hours, depending on the tasks performed. It takes 5 hours to recharge the battery, but if bought with a spare lithium battery, they can be swapped over in two minutes.

Kovaco’s new skid steer is powered by three electric motors – two for propulsion and one for the hydraulic pump. With a lifting capacity of 900kg and a maximum lifting height of 3.6m, the Elise900 can be used with 50 different attachments.

What’s more, it comes with a smartphone display that can be removed and used to operate the skid steer remotely.

On the subject of remote control, Bobcat has also launched a remote control system for its compact loaders that are equipped with the company’s Selectable Joystick Controls, including its skid steers. 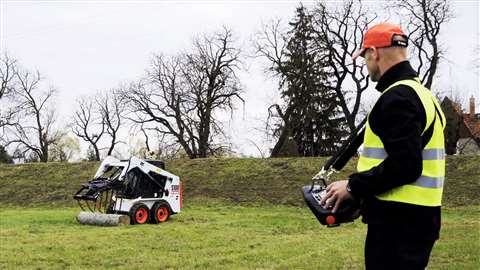 Bobcat said it is the first manufacturer to introduce an original plug-and-play remote control system, as opposed to an add-on from a third party.

Jiri Karmazin, Loaders Product Manager, Doosan Bobcat EMEA, said, “The remote control system can be used in many applications with the focus on limitless visibility, the ability to communicate with the surroundings without the need to be present in the cab, comfort enhancement for applications with noise, vibration and harshness, or even in dangerous areas.”

JCB recently unveiled new large-platform skid steer loaders that feature a Hi-Viz boom. Based on the firm’s large skid steer platform, the previous 225 becomes the 250 and the 260 is renamed the 270.

The new JCB Powerboom loading arm is mounted 50mm lower to further improve visibility from the cab by giving the operator a view across the boom to the right-hand side.

The boom also features new double tapered pins in the boom mounting tower and in the quick hitch, to boost strength and durability. Hard pipe hosing is used on the inner side of the boom for further protection from damage, while a bolt-on wear plate avoids wear on the quick hitch from frequent attachment changeover.

Also, the tilt cylinder is now protected within the end of the boom, allowing the cab to be raised for maintenance with the boom in any position, and a 10% increase in tilt cylinder breakout force on the 250 and 270 models has been achieved by increasing the diameter of the tilt cylinder.

The operator’s experience has been improved by widening the cab door’s opening angle by 15% to give easier access, and the start-up procedure has been simplified to three steps. The operator closes the cab door, lowering the lap bar and armrest. The machine is started and then the parking brake is released, at which point the loader is ready to operate.

New models have also been launched by John Deere. Its four Tier 4 Final G-Series small-frame skid steers – the 312GR, 314G, 316GR and 318G – have been several years in the making and were designed based on customer feedback.

The new machines feature an improvement in power-to-weight ratio and an optimised boom design that enables lift heights of more than 3m on the vertical lift models and a 20% increase in breakout forces on the radial-lift models.

The vertical-lift design on the 314G and 318G models provides all-around visibility with clear sight lines both above and below the boom, enabling easier grading in tight spaces. In addition, the low-profile rear-hood design expands the view to the rear.

Meanwhile, the radial-lift option on the 312GR and 316GR offers a one-person boom lockout system for safety that can be activated from within the cab. The lift system is designed for lower maintenance and optimal digging performance.

The new skid steer economy models – the radial lift 312GR and the vertical lift 314G – were purpose built for simplicity, reliability and durability.

One particularly significant change to skid steers in recent times has been the move to electric over hydraulic controls (EH). Zupancic said, “The newest technologies that are being developed around EH systems are enabling features like switchable controls, transmission response settings, boom/bucket speed settings, selectable accelerator/decelerator modes, and creep-mode settings,” he says.

Other features include the ability to automatically level attachments, both in the up- and downward motions of the boom cycle; programable return-to-dig; return-to-carry; and attachment positioning capabilities for repetitive tasks.

This was echoed by Nathan Ryan, Product Manager of Skid Steer and Compact Tracked Loaders at Wacker Neuson, who said, “EH controls have emerged as the customer’s choice of control method. EH controls provide a way for users to quickly switch from hand and foot controls to H-Pattern controls or ISO-Pattern controls. EH controls also allow the user to adjust some of the parameters of the controls like acceleration, maximum speed and cycle time.” 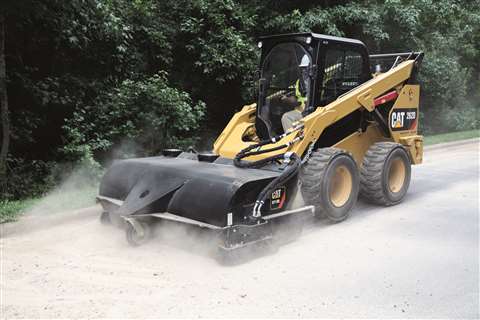 New technology on Caterpillar’s skid steer loaders, such as the 262D, is improving their safety

Eli Abi-Karam, Product Application Specialist for Skid Steer Loaders at Caterpillar, has also spoken about the role of EH; “Electro-hydraulic controls are now the norm and act as a tremendous enabler for automation and integration of features that allow customers to save time and/or make more money.  Many of these features assist with repetitive tasks like grading, digging and loading, by allowing the user to set up the machine to do the work with less user interaction and expertise.”

When it comes to the effects of new technology on skid steers, Abi-Karam said the biggest changes have been increases in safety and efficiency. “Cat skid steers are equipped with sensors and features to disable the machine hydraulics and operation until the operator is ready and safe to start work. Fully integrated vision systems such as rear-view cameras, adjustments for machine speed and aggressiveness of the implement response and drive response allow the operators to match the machine to the operator’s skill level and application,” he said.

Skid steer manufacturer Tobroco-Giant is investing heavily in growing its production facilities in Oisterwijk, the Netherlands. 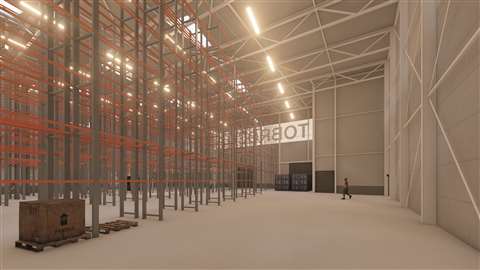 In 2018, the company spent €4 million developing the productionn lines for its new G4500 loader range and telehandlers, as well as various pre-assembly stations for engines, cabins and telescopic arms.

This year, Tobroco-Giant intends to invest a further €14 million in its production facilities, including the addition of a new warehouse, on which work is due to begin in October.

In total, the new addition will add 8,000m2 to the factory and it will be divided into two stories to optimise the use of the space. The 16m-tall warehouse, which will be fed via several new loading docks, will be used for servicing, production and the storage of parts. 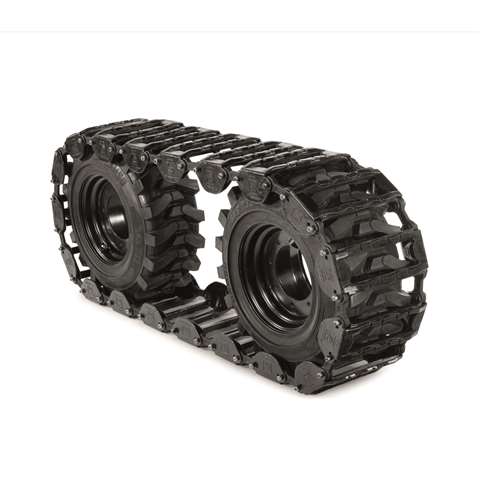 Andy Gaffney, Product Line Manager, Construction Tracks, Camso, said, “Traditionally, Camso has offered rubber products, but we know our customers are looking for more than that. They’re in the market for off-the-road solutions.” Hence, the move to a steel product.

Gaffney added, “Compact Track Loaders are becoming increasingly popular and although our Steel OTT track won’t change your rubber-tyre machine into a tracked machine, it will improve a skid steer’s traction, mobility and performance in extreme muddy applications when users need it.”

The new steel product is intended for sever traction needs, such as on muddy terrain or when climbing over rock. The steel tread bars also have the cutting-edge operators need when working on heavy ice surfaces or on slopes. They’ve been designed with wide voids between the tread bars to make them easy to clean.

The Steel OTT tracks are available in 10 and 12 inch widths so that they can be fitted to most skid steer loaders with conventional R4 tyres.