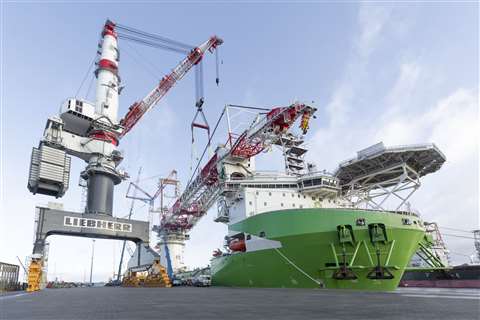 Two people were hospitalised and 10 were treated on site for minor injuries in the incident. It happened at the port of Rostock on Germany’s Baltic coast where the vessel is moored. Video footage of the incident shows the crane’s main lattice booms flip over backwards and a broken hook hanging from the main hoist lines.

Heavy lift DP3 vessel Orion is 216 metres long, has a beam of 49 metres and a draught of 16.8 metres. The vessel is owned by Cosco (Qidong) Offshore in China. Belgian offshore specialist contractor DEME Group was due to take delivery in the second half of May for operation by its subsidiary GeoSea.

“The crane has suffered significant damage, while damage to the crane and the vessel will be investigated in the upcoming days and weeks,” DEME Group said.

Commenting on the incident, Leopold Berthold, Liebherr-MCCtec Rostock managing director, said, “At this point we wish the injured persons all the best and hope for a full and speedy recovery.”

A Liebherr statement read as follows: ”At this stage in the investigations, the responsible authorities and experts unanimously agree that a broken crane hook was the cause of the accident. The exact reasons as to why the hook did not withstand the load are unclear at this stage of investigations. The design and manufacture of the crane hook was purchased from an external supplier. A design or production error of the Liebherr crane can therefore be excluded.”

Liebherr said the failure happened when there was a test load of around 2,600 tonnes on the hook. The full load test would have been 5,500 tonnes, lifting a barge. The company made an initial estimate that the damage “amounts to a high double-digit million figure.”

The Heavy Lift Crane HLC 295000 is the largest Liebherr has ever built. It has a 35 metre outreach and maximum lifting height is more than 175 metres above the deck of the Orion, Liebherr said. The crane and its 145 metre boom was installed on the vessel at the Liebherr port facility in Rostock earlier in 2019. For the installation Liebherr used its new TCC 78000 portal crane installed for such works at the quayside. 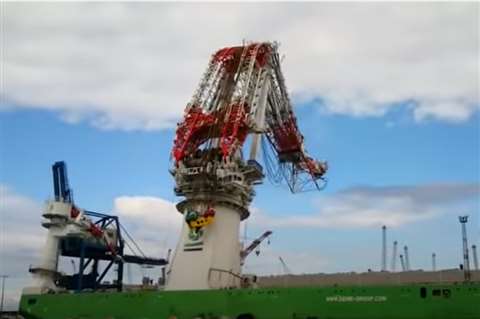 Orion’s first job is scheduled to be the installation of turbine and other jacket foundations plus topside installation for the Moray East wind farm off the coast of Scotland. Consent for construction of an offshore wind farm up to 1,116 MW was granted in 2016. Construction of Moray East is underway and there is also Moray West. Moray East is 950 MW, the total wind farm area is 295 square kilometres and it is 22 km off the coast. Tip height of the turbines will be 204 metres.