PartnerLift has reported a 10% decline in rental revenue in March and a 15% decline in April, following monthly surveys of its member companies during the Covid-19 outbreak.

Kai Schliephake, managing director of the Germany-based association for independantly owned rental companies, added that its members were now seeing a sharp improvement in demand for aerial platforms, construction machinery, cranes and forklifts.

Some of the smaller companies in the group even recorded an increase in sales during the height of the crisis. This, says Schliephake, showed the strength of its partners, who are often well rooted in their region and have very close relationships with local tradespeople.

Schliephake is also complimentary of the German government during this period and said working permits were fasttracked and liquidity aid was provided even faster – in a total of 8.5 days on average. “Our so badly criticised state institutions work much better than their reputation, especially when you look at the situation in other European countries.“

On the subject of countries outsisde Germany, Schliephake continued, “We are in contact with other companies in other European countries almost every day - the situation in the Mediterranean countries in particular is much more dramatic than in Germany. Even in Switzerland, the effects appear more serious in the French-speaking part than in the German-speaking area. It comes as no surprise that we are asked again and again why Germany has so far come through the crisis so lightly.”

However, Schliephake explains the traditionally strong southwest of Germany has suffered more than the rest of the country. “We suspect that it is due to the automltive industry that was affected before the coronavirus pandemic, on which many economic activities in the south depend.“

He goes on to say that in communicating with other associations based in Germany, some of which represent different industries, it is clear that the pandemic has not hit the aerial platform rental industry as badly as others.

The PartnerLift staff have all been wokring from home, since 13 March. “This is not a new situation for us, since we have relied fully on digital working techniques since moving to Osterholz-Scharmbeck in 2014.

“Employees have always been able to work temporarily from home with their laptops; this is also anchored in all employment contracts. We also have VoIP phones, which - if they are connected to a router - enable calls from anywhere with the same range of functions as in the office, ”says Schliephake.

PartnerLift is currently working on a coronavirus microsite to bundle all information that modern rental companies are looking for, including sharing information about how individual companies had dealt with the pandemic, applied for aid and any other related information. “Together with the state liquidity aids and portals with which these can be applied for, this creates a comprehensive knowledge base on dealing with the crisis, which helped company managers get back to their day-to-day business as quickly as possible - the rental of work platforms, construction machinery, cranes and Forklifts.“ 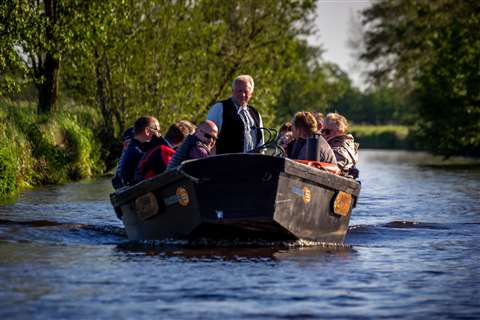 PartnerLift members on a recent outing.

Despite the crisis, the PartnerLift Advisory Board is already discussing investments in new equipment for 2021 in the fourth quarter. The PartnerLift cooperation has organised a virtual ‘shopping day‘ every year since 2017 and this format is expected to be an effective tool during the crisis. “This shows that the way of using digital technologies early on, which was initiated many years ago, now brings a clear advantage. In this area, there will be a few surprises in the market this year”, says Schliephake.

At the same time, PartnerLift is attaching great importance to the expansion of digital training courses. The growing area of IPAF training and its new German-language MEWPs for managers course are becoming increasingly important. PartnerLift can offer both to all interested parties free of charge until 31 July.

Schliephake concludes that the monthly online surveys on the Covid-19 situation, gives its partners additional security, as they can quickly assess whether their development is still positive or whether any parts of their businnesses need to be readjusted. And, says Schliephake, “The PartnerLift Advisory Board meets weekly to react quickly to the additional requirements and wishes of partners, for example, several thousand masks have already been ordered and delivered for the partner companies.

“We hope that the situation will stabilise further and that at some point we can say that we have mastered this crisis better than if we were without the PartnerLifter community.“