Working in a city will increasingly require cranes to operate more quietly. Using electricity to power the crane is one way to do this. Where a crane can be powered from rechargeable batteries or connected to the mains, it will run relatively silently. In addition to being quieter than running a diesel engine, there is no air pollution at the point of use.

While the crane was driven to site and set up on outriggers using its diesel engine, when it was level, the engine was stopped and the crane switched over to electrical power. Christian Jahn, crane operator, said, “I’ll do everything else using site power, including the MK’s assembly.”

Quiet operation meant the city allowed an extra hour of working both in the morning and the evening, helping to relieve pressure on the installation schedule.

The glass panels weighed up to 800 kg each and were attached to the crane using a vacuum lifting device.

A video of the project is here: https://youtu.be/nRd-E0sL5Xk 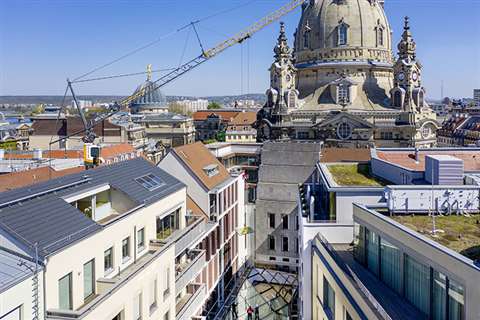 With the jib luffed at 30 degrees, the crane lifts the glass panels from the inner courtyard over the 30-metre-high row of buildings. At a radius of just under 39 metres capacity is 2 tonnes