The impact of the Covid-19 pandemic has varied in severity across Latin America but it is expected to have far-reaching effects across the region that could alter the very makeup of the sector, according to a recent webinar hosted by sister magazine Construção Latino Americana (CLA).

The ‘Rental in times of Covid-19’ webinar was held on 16 July and was chaired by Editor Cristián Peters. 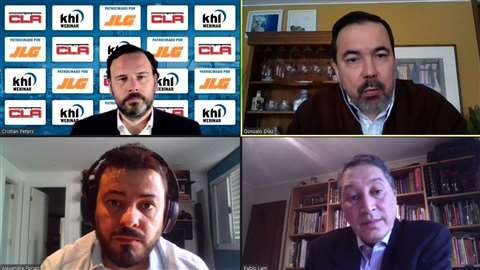 A recording of the webinar can be viewed here.

The degree to which rental companies were affected depended on how various governments across Latin America responded to the virus.

For instance, in Peru, where particularly strict measures were implemented, Diaz said GDP in the second quarter of the year is expected to drop by 30%.

“We have had almost 100 days of quarantine, which has paralysed the economy,” said the Ferreyros executive.

Meanwhile, Lam said that in countries such as Chile and Brazil the reaction was less strong than in Peru, Colombia, Bolivia and Ecuador, where SK Rental has operations; “Regarding activity, expectations in Chile are not so negative. A drop of about 15% is expected, but investment will fall much more sharply.”

Speaking about Brazil, Forjaz said, “In March, many sectors had to close completely, and in April we had a very bad month, but already in June we experienced a positive month in relation to the previous ones. It is not the best of worlds, but comparing rental with other sectors we are happy.”

The Brazilian rental sector saw growth of 15% in June, compared to the same period in the previous year.

Regarding rental payments, Ferreyros chose to support its customers in Peru, according to Diaz; “Our clients were also not receiving revenue from the equipment because their construction sites were shut down. Sure, we could remove the equipment, but perhaps we wouldn’t have gained much from it. You had to take a balanced, long-term view to find a fair temporary solution.”

Lam echoed Diaz’s sentiment, emphasising the need to be flexible with clients during the pandemic; “There have been cases in which the quarantine decree was so extreme from one day to the next, such as in Peru or Colombia, that the customer was not even given a chance to return the equipment. In many cases, the equipment was trapped on the jobsite. You had to talk to each other to see what was best for both parties.”

On the topic of future trends, Lam said, “The changes that are taking place today in the industry are probably here to stay, and they are profound – from the acceleration of digital adoption, to the simplification of the business model. And probably, in some cases, there is going to be consolidation.”

Meanwhile, Forjaz suggested that, up to now, most equipment rental companies have been renting light equipment, but this might change due to the pandemic as firms look to diversity their fleets.

One positive trend discussed during the webinar was the likelihood that contractors will begin to put more focus on their core business and outsource non-essential activities. In other words, they could become more reliant on the rental of heavy and light equipment, especially in areas where demand for construction is high, as is the case in Latin America.