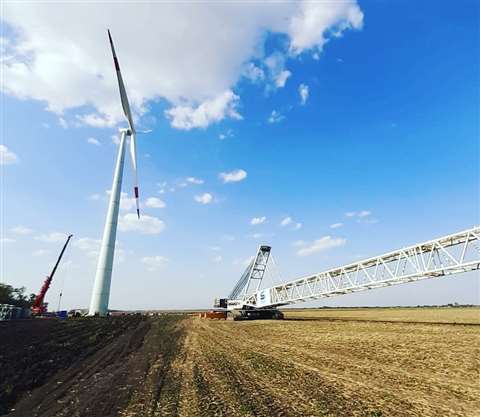 Red Wind B.V. recently contracted Sarens to install thirty WTG Lagerwey wind turbines at the wind farm in Adygea, Russia. Sarens coordinated all the in-park logistics required to transport the turbines from the storage warehouse to the installation site and was then responsible for installing each turbine, including all interior electrical and mechanical components.

Sarens selected two main cranes for this project: the Terex SL3800-1 and the Terex Demag TC2800-1, which were on site from July through November of 2019. These cranes were selected for their capacity and relocation speed, taking into consideration the project’s location and the closest available Sarens BU.

The Terex Demag TC2800-1 was delivered from the Sarens yard in Minsk, Belarus, via 27 trucks. It travelled approximately 2.500 kilometres, and the journey took seven days. The Terex SL3800-1 was transported over the course of four weeks, travelling from Sohachew, Poland via rail and then via 30 trucks. This meant that Sarens had to coordinate a smooth transition between rail and road transport, unloading and reloading the equipment along the way. Complex customs regulations provided an additional layer of complexity.

With the cranes and auxiliary equipment on site, Sarens could begin to execute its two primary responsibilities: turbine transport and installation.

“It was a big challenge to work on this project,” says Andrei Popov, Country Manager for Sarens Russia. “Sarens took responsibility for all the steps involved in installing the WTG, except for the foundations.” 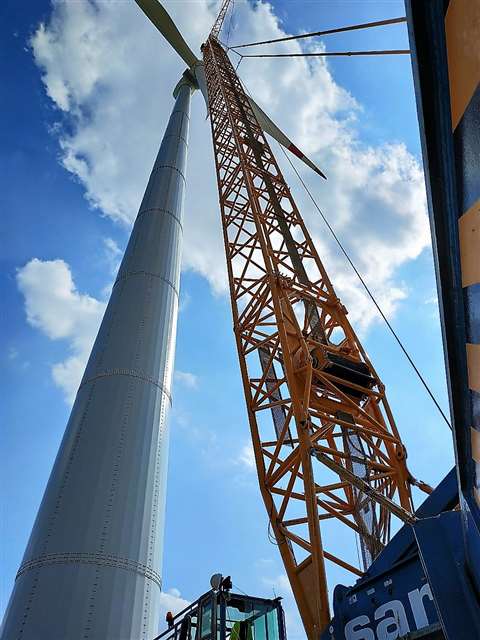 Sarens transported each wind turbine component from the lay-down area of the Adygeya wind farm to the project site, including the heaviest element: a 55-tonne generator. The longest elements were the turbine blades, which measured 49 metres each.

The biggest challenge was transporting the WTG components from the warehouse area to the construction site via public roads. The crew had to account for the the lack of space on the platforms, as well as the need to supply items almost just in time. Because the dimension of each crane pad was 25x25 metres and there weren’t additional pads for WTG parts, the components had to be delivered step by step throughout the installation process. Two teams with four riggers each worked to load and unload each component.

To install each turbine, Sarens first pre-assembled 2-7 modular tower sections and then lifted the first section onto its foundation. Two teams of specialists worked to optimise this process, using automotive cranes with a lifting capacity of 150 tonnes.

Sarens then began the main installation. The crew completed all the remaining wind turbine assembly processes, including docking the rotor to the generator and nacelle. At this stage, two teams of specialists worked with two auxiliary cranes with a lifting capacity of 160 tonnes each, as well as the main Terex cranes.

Sarens would like to thank all the crew members who were involved in this project from the planning stations to the final installation.

“Sarens did a good job,” said Red Wind B.V. client representative Alexandr Guba. “We have created an efficient team between us, which is effectively able to perform the tasks of the main technological process of Assembly and installation of wind turbines.”