XCMG has been spreading the word about the benefits of using access equipment in China.

IPAF representative for China, Bai Ri, took part in a live online broadcast to explain the advantages of access equipment in a market that still has huge potential for growth outside of major cities, where it is already widely being used. 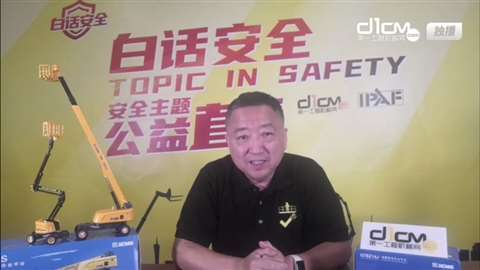 It included basic information about the product type, which would be considered obvious in existing mature access markets. “For example, what does an aerial work platform mean for users and operators in regard to cost, efficiency and safety, compared with the previously-used scaffolding? And what is the difference between a temporary, makeshift product like a basket mounted on a crane and a real access platform, with respect to safety requirements, function adaptability and the law?” said XCMG.

In this regard, Bai Ri also outlined the most recently launched national safety laws and industry standards of China.

“China’s work at height industry was not seriously developed until the beginning of this century, about 40 years later than the US and the Europe, and 20 years after the other Asian emerging countries like Japan, South Korea and Singapore. However, according to IPAF, the MEWP market in China has grown at an average annual rate of 36% since 2012, by the end of 2019, the equipment inventory of China has reached approximately 130,000 units, with a market size of US$1.3 billion. The growth is 42.9%, which is five times of the North American and the European.”

Following the online meeting Bai Ri added that, while the expansion of the Chinese MEWP market is astonishing, “The recognition has not been matching the potential. Once all walks of life and each local government of China from the east coast to the west border truly recognise it, the work at height industry of China will enter into a more astonishing scale of development.” 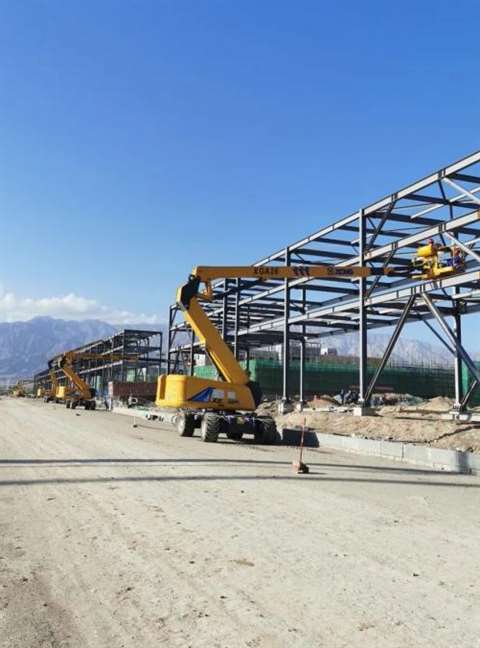 XCMG booms at the Ethane Ethylene project, in the south foothills of Tianshan Mountain.

XCMG equipment is now being used in areas of the country where access equipment would not have been used in the past. One example is an Ethane Ethylene Plant, being built for PetroChina, next to the existing Tarim Oilfield, in Korla, a remote border county, located in the south foothills of Tianshan Mountain in Xinjiang. It is a sparsely populated area but contains rich natural gas resources. In early May, 24 XCMG GXA26 articulating boom lifts arrived at the site, equipped with special components to protect the machines against strong wind and sand.

Another project, is BOE’s sixth generation Amoled Plant for mobile phone production, amounting to an overall investment of $6.6 billion. It is expected to be completed and put into use in 2021. XCMG says that more than one hundred telescopic boom lifts are working there in an extremely hot and wet environment.

A third project, at Zhuhai Airport is one of the key constructions in the Zhuhai Municipal area. By the completion of the project, the annual airport passenger throughput will be up to 27.5 million, helping promote the tourism industry for the city located on the southern China coast. More than ten XCMG telescoping boom lifts have been operating on the site.