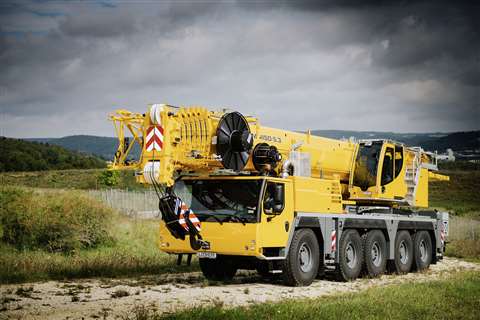 The latest crane’s 66 metre boom is 10 percent (an impressive 6 metres) longer than the outgoing 130 and capacity is given as being 15 % higher on average, both on full or part ballast. Interesting to note that the improved performance is achieved from a vehicle with the same gross weight as its predecessor. At 12 tonnes per axle, the new five axle model travels with 9 tonnes of counterweight.

Liebherr unveiled the new single-engine crane on 20 October 2020 in an online launch. Christoph Kleiner, sales director, explains “the jewel in your fleet” as “a flexible all-rounder, the LTM 1150-5.3 will enhance any crane fleet like a jewel – it has the longest boom in this crane class at 66 metres and can compete with crane models in the 200 tonne lifting capacity class. It delivers outstanding lifting capacities when fully raised and at large radii. And it is immediately ready for use once it reaches the site. This is because the new 150 tonne crane carries nine tonnes of a ballast with a gross weight of 60 tonnes. That means it can complete lots of jobs without requiring additional ballast transport vehicles. That saves time and money and makes the crane even more valuable to crane contractors.”

Extending the new crane’s boom to 60 metres (the same as the outgoing model’s maximum) the LTM 1150-5.3 lifts 12 tonnes, which is 1.5 tonnes more than the old one, Liebherr said. Capacity at the full 66 metres is more than 9 tonnes, making it suitable for tower crane assembly and building radio masts.

Adding the lattice extensions gives a maximum hook height of 92 metres and a radius up to 72 metres. For this, a 7 metre lattice section as a boom extension and the 10.8 to 19 metre double folding jib are required. Hydraulic adjustment of the jib is possible between 0 and 40 degrees. Also available are a 2.9 metre erection jib and a runner, which can be swung to the side. The lattice extensions can be used on several other Liebherr models between 100 and 180 tonnes capacity.

A feature claimed as a first on telescopic cranes is the LTM 1150-5.3’s adjustable hook block. Liebherr has a new range of blocks with steel plates attached to both sides. Their number can be altered to change the weight of the block to suit different situations.

Existing blocks in this capacity class typically weigh 700 kg, Liebherr said, while the new one weighs 500 kg but can be increased to 700 kg with the simple addition of more steel plates. This new design is available on blocks with between one and seven sheaves and they can be used with 19 or 21 mm diameter hoist rope.

Power for the whole crane is from a 400 kW (544 hp) six-cylinder Liebherr diesel in the carrier. It is a Stage V exhaust emission engine and can be configured to comply with other regulations, for example, Tier 4 for the USA or stage IIIA for less regulated countries.

It is driven via a ZF-TraXon gearbox and includes Ecodrive for travel and eco mode for crane operation, both to save fuel and reduce noise and carbon dioxide emission. The Hillstart Aid function is also included.