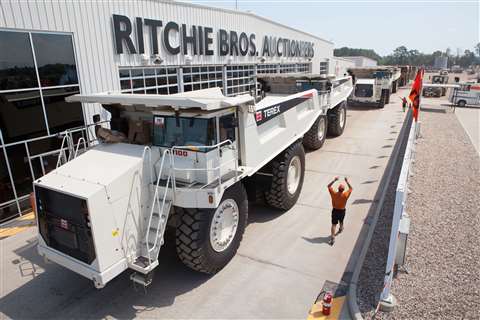 The two largest of these events took place in Alberta and Texas, where Ritchie Bros. sold a combined US$114 million of equipment online for approximately 1,800 consignors.

The Houston, Texas, USA auction on June 21 – 23 attracted more than 10,000 online bidders for the 5,900+ items consigned, with buyers from Texas purchasing approximately 48 per cent of the equipment.

“Our Houston yard was very busy leading up to the auction with customers inspecting, testing, and comparing items prior to bidding online,” said Chuck Roberson, regional sales manager at Ritchie Bros.

On June 22 – 24, Ritchie Bros. sold approximately 7,000 items from its Edmonton, Alberta, Canada auction site and attracted more than 12,300 online bidders from 43 countries. Approximately 60 % of the equipment in the CA$65+ million (US$51+ million) auction was sold to Alberta buyers, while the remaining 40 % was sold to buyers from as far away Australia, Belize, and Morocco.