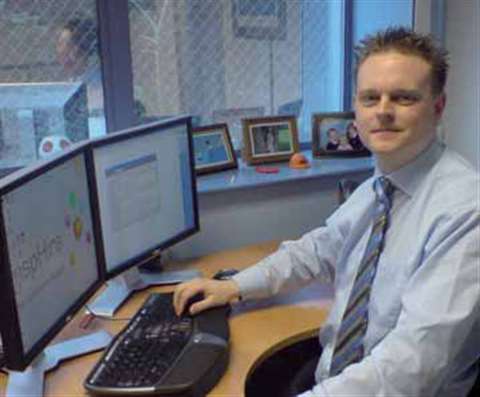 Chris Branson helped found InspHire when he was 27.

Chris Branson is a rental software veteran and is still just 37 years old. He started programming at 18 and wrote his first rental software package when he was 21 before helping to found InspHire in 1997 with what he says was the first-ever, Windows-based rental software.

“I'd spent six months looking at software providers”, he tells IRN, “and there was no Windows product on the market. Windows 95 had been a huge change. The systems available were very basic. You could only do one thing at a time; they were cumbersome, antiquated and not very forward looking.”

His conclusion was that, “if we get in here first, we'd have a chance of making it succeed.” They bought the assets for an existing rental software solution -“It was 'broad church' software-tool hire, plant hire, audio-visual hire”-and completely rewrote the code to apply it to the Windows application.

Since then the company has become a well-known fixture on the rental scene – particularly on its home ground in the UK – with more than 450 companies in nine countries using its software.

As an IT specialist Mr Branson is used to the fast pace of change in technology, but even he has been amazed by the changes over the past 10 years; “I've been overwhelmed by how far the products have come…it's night and day. I'm just amazed at how sophisticated it has become. We've seen in the last three years that medium sized organizations have developed very high expectations of what they want to achieve.”

The e-commerce trend is the most important, of course, although Mr Branson says it has only been in the last 18 months that it has “really become a must-have feature. Clients now say they would lose business to competitors who offer it.”

The next three to five years will see another ‘step-change’ in the market, says Mr Branson. He thinks 3G mobile communications technology will just speed up the access to data for field workers, whether delivery drivers or sales staff. He says transport logistics has become another area of key interest for rental companies – at a recent focus group meeting half of the 12 companies represented expressed strong interest in the technology.

For the future, he talks about tagging equipment-possibly using RFID (radio frequency identification)-and having, for example, automatic health and safety alerts for topics such as hand arm vibration when a hire is made. He says the company is already talking to some of its UK clients about this.

If the UK remains InspHire's most important market – it accounts for around three-quarters of all revenues – Mr Branson is keen for this to change. He has a loose target of a 50/50 domestic/export split within five years.

Progress is already being made in appointing resellers in other markets, which is the company's preferred export route. It already has a sister company (but independently-owned) in The Netherlands for the Benelux market, Insphire International BV, and has recently appointed resellers in Australia (elev8) and South Africa (Bluekey Software Solutions). It also has resellers in North America (Progressive Solutions Inc, based in Canada) and Ireland (Advent Processing Solutions).

This overseas work has seen some notable contract wins, the most important being that of Boels BV in The Netherlands, but more recently the powered access rental businesses in the UK and France owned by Haulotte Group.

Mr Branson says the focus remains on the UK and Europe, and that expansion elsewhere will be undertaken at a careful pace. “It would be insane of us to take our eye off the ball here”, he says. The company grew by 30% in the year to March 2007 and it is Mr Branson's priority to try to maintain this level of activity.

He still has some time to do programming, but you get the feeling that he is happy to hand that over to the 20-somethings in the company; “I do a little to keep my hand in”, he says, “but I've just turned 37 and all I've done since I was 18 is write software. The last 10 years have been hard work, but I've enjoyed every minute of it.”