100 up: Murray Pollok talks to Multitel Pagliero at its 100th anniversary event

Maultitel Pagliero celebrated its centenary with a major event at its Manta headquarters in Italy at the end of September. Murray Pollok reports.

For a truck mounted platform manufacturer celebrating its centenary, and with an 83 m unit already under its belt, there was surely a temptation for Multitel Pagliero to build a 100 m machine.

Jerry Kist, the company's long-standing export director, dismisses the idea in typically forthright fashion and says it wasn't even considered; "It might have been a milestone to build 1000 machines in a year, but it's not a milestone having a 100 m that you can't sell."

The down-to-earth approach is part of what lies behind the success of Italy's biggest truck mounted producer, which celebrated its centenary with a grand party for 500 customers, dealers and suppliers at its Manta, Italy, headquarters on 30 September.

The company has every right to be proud - 100 years is a long time for any company to be in business, and even longer to sustain the ownership of a single family.

Jointly managed by brothers Renzo and Sandro Pagliero, the business was founded in 1911 by their grandfather Lorenzo and is now employing the fourth generation - four of the brothers' children are working in Manta and a fifth is set to start next year.

However, despite the big turnout for the event and the definite feel-good factor of the party, there is no escaping the fact that the current business climate in Europe is dampening expectations for continued recovery in 2012.

Renzo Pagliero, speaking to Access International at the company's head office in the afternoon before the party, says the difficulty in obtaining finance continues to hamper the recovery of the aerials market. Jerry Kist acknowledges that Pagliero is prepared for a significant fall in sales in 2012 if the poor economic forecasts for the Eurozone are realised.

He says the worst case is that the company's production would fall from around 750 units this year to closer to 600 next, which would be almost the same as in 2009 when the crisis was at its height. At the height of the market in 2008 Pagliero built almost 1000 machines.

"You have to react to it", says Mr Kist, "Right now, the only market that is not concerned is Germany - they are still talking about investment because their numbers are still healthy. Italy and France are a lot slower and the UK is not as active as it was a year ago. All of that makes you cautious."

The company has started to build a fifth production hall near its Manta base - as a centre for aluminium boom production and a dedicated space for the crawler product range - but that development may be postponed if European markets slow down. "We have to follow the economy", says Mr Kist. A decision on whether to continue with the new production facility will be made before the end of the year.

Despite these uncertainties, Pagliero continues to develop its export infrastructure. It is likely to open a subsidiary in Germany, only its second in Europe, at a leased location in Aachen in the west of the country. Pagliero's other subsidiary is in France, where it enjoys a good market share. (Many of the small truck mounts now going through the factory are in the red livery of Loxam.)

Mr Kist said the Aachen facility - which could open as soon as January - will be used to support the sales activities of its German dealer, Johannes Becker, whose role is unchanged, and also to increase sales efforts to eastern Europe. The facility will stock both new and used Multitel machines.

Pagliero also continues to develop its product range. Indeed, while the Friday night centenary party was the main event, the open day on Saturday was a more serious affair, with Pagliero taking the opportunity to launch several machines, including its latest crawler, the SMX250, and the new MJ320 truck mount, a 32 m unit on a twin-axle 18 t truck. These in addition to the two debutantes at APEX - the SHX190 crawler and the MX250 truck mount.

The crawlers remain very much a niche for the company (see box story), with trucks still being the main focus. The new MJ320 adds to the company's range of telescopic machines, and is packaged as an economical 32 machine on a twin-axle carrier, either 15 or 18 t GVW.

All of Pagliero's machines in the 28 to 83 m range use a gearbox joint for the fly jib. However, for the new 32 m model, Pagliero has opted for a cylinder joint which offers 180 degree rotation of the 11 m long jib rather than the 300 degrees of the gearbox design. This makes it a less expensive alternative to Pagliero's existing 35 m model. Outreach at full 280 kg cage capacity is 22 m, increasing to 23.5 m on 120 kg.

For Melvyn Else, managing director of Pagliero's UK dealer, Access Industries, the MJ320 is an ideal replacement for the 34 m Bronto model, which is no longer in production. Many of these are still in service in Europe - including up to a hundred in the UK alone - and are approaching their replacement age.

Mr Else says the platform has a shorter wheelbase than the Bronto (3.9 m) and a 0.35 m narrower outrigger width. Platform capacity on the standard 2.0 m cage is 320 kg - around 40 kg more than the Bronto - reducing to 280 kg on the hydraulically extendable 3.2 m long cage.

Mr Else said the unit's outreach at the top end of the envelope is also better than the Bronto.

"If that's not an ideal replacement for all the ageing Brontos in the UK, I don't know what is", says Mr Else.

The company has other plans for its truck mounts as well. There is the prospect of larger two-axle machines using the same cylinder joint design as use on the MJ320, and "we'll see if we can reach 43/44 m on two axles", says Mr Kist. "These ideas are in development, but it depends on where the market sees the priorities."

These are plans for the future. At the centenary party in Manta, however, the Pagliero family had other things to think about - they were simply enjoying the moment. Happy birthday.

Labor pains
Booming U.S. construction market, but finding labor to get the work done is a major issue 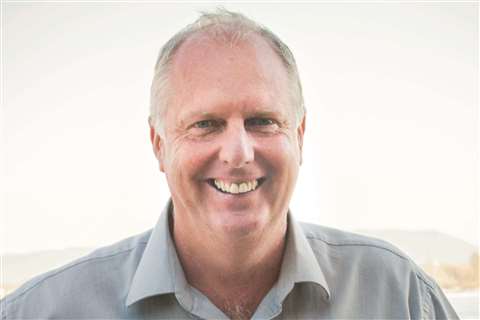