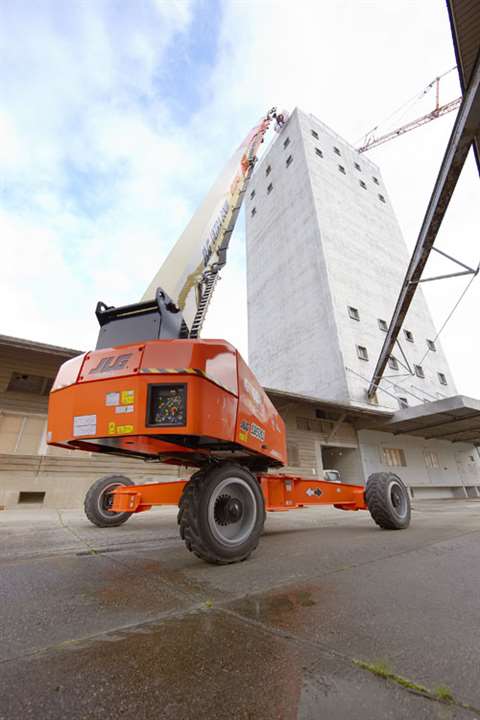 Space for new construction is quite limited in Geneva, so the Swiss government decided to renovate a factory and its characteristic tower, converting the landmark into luxury apartments.

The renovation of the former flour factory, including its tower mill, demanded the tallest self propelled aerial work platform on the market. With little room on the work site, the up-and-over reach of thejib-mounted platform on the JLG 1850SJ Ultra Boom has proven very helpful in dismantling the unused tower.

The 1850SJ lift is on rent from Gyger Nacelles, an equipment specialist known for its early adoption of big boom lifts. The company purchased one of the first 1500SJ’s when the 45.7 m lift was launched in 2011.

Didier Gyger of Gyger Nacelles comments, "Since purchasing two 1500SJ lifts we have seen customer demand for big boom lifts grow. We chose the JLG 1850SJ lift because we had a good experience with the 1500SJ. The sense of stability is beyond what we expected, which is particularly important when you are working at 58.6m."

He continues, "The requests for this machine are also going beyond what we expected. There is a real, strong demand for this type of product in Switzerland.

"Foremost, we rent it to customers who are involved in bridge construction work, which is typically work beyond 50m. But we also see that the 1850SJ is rented as a substitute on job sites where a truck mounted platform would be considered in the past. A MEWP is considered to be a cost-efficient alternative to a truck, both in terms of rent rates and labor costs."

Gyger Nacelles ordered the 1850SJ Ultra Boom during Conexpo 2014 in Las Vegas and it was delivered to Switzerland in October by Stirnimann, the Swiss distributor for JLG products.