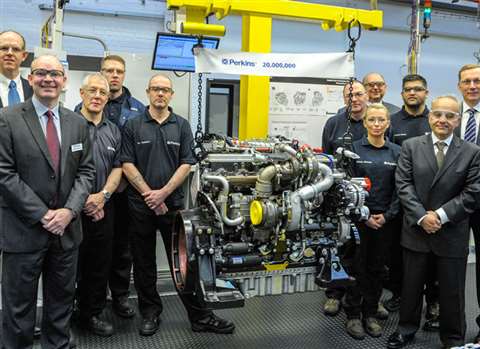 The 20 millionth engine produced by Perkins, a 1206 two-stage turbo Tier 4 diesel engine, has rolled off the production line at the company’s facility in Peterborough, UK, 81 years after the brand was established.

President Ramin Younessi said, “Our global manufacturing facilities have all contributed to this 20 million milestone for the Perkins brand, to which I extend my sincere thanks to the team, while our global customer base have, of course, made their contribution too, by continuing to value their ongoing relationships with us as their power provider, as much as we value our partnerships with them.”

Perkins said that at least 4.5 million of the engines it had made were still in service. It has the capacity to manufacture 800,000 engines a year from its manufacturing facilities in Peterborough and Stafford, UK; Griffin, Georgia, USA; Curitiba, Brazil; and Wuxi, China.

Perkins became a wholly owned subsidiary of Caterpillar in 1998.