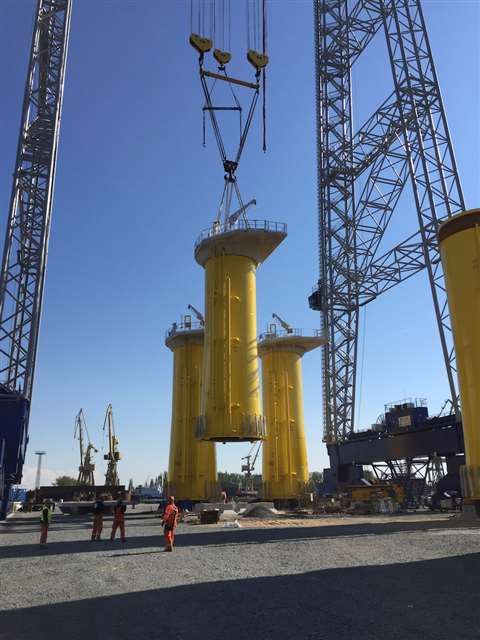 The transition pieces were tailed from horizontal into a vertical position

German crane and heavy transport contractor Schmidbauer used a 1,400 tonne capacity gantry crane - rigged with below the hook equipment from Modulift - to lift 91 tower pieces weighing 380 tonnes each onto barges in Poland for transportation. The cargo is headed for the Race Bank offshore wind farm in the North Sea.

The crane, owned by Bilfinger Mars offshore, stands 120 metres high on the Ostrow Brdowski Island and is a permanent fixture at the facility in the north west of the country. It is close to the German border, from where Schmidbauer accepted a scope of work to rig the crane, using two of its four 350 tonne hooks.

UK-based specialized engineering company Modulift provided the spreader beam, type MOD 400/600, which was assembled with an 8 m span. It was part of a custom 600 tonne rig, including the hook block that was attached to the crane to lift 91 transition pieces.

Philipp Verges, sales manager global projects and key account manager offshore at Schmidbauer, said, “We assembled a custom rig based on the successful application of a similar below the hook solution for another project. Bilfinger retained control of the lifting operation, but anything related to the rigging equipment was our responsibility so we combined our expertise with the best and most suitable equipment available.”

Verges added, “The transition pieces were tailed from horizontal into a vertical position. After placing electrical components and secondary steel, they were lifted onto barges, which transported about six pieces at a time. The project started last month [May 2016] but remains ongoing.”

Bilfinger Mars Offshore is a joint venture between Bilfinger, an international engineering and services group and provider of offshore wind power solutions, and MARS, a Polish closed end investment fund, managing a portfolio of companies in the shipyards and the offshore steel structure industry.