Installation of pressure vessels at a refinery in Texas, US

ALE has installed three pressure vessels at an oil refinery in Texas, USA, in order to increase the plant’s petroleum desulphurisation capability.

The smallest vessel was delivered under hook and tandem lifted by two hydraulic cranes with 100 tonne and 400 tonne capacities. This operation tailed up the vessel from its delivery trailer and set it on its foundations.

ALE then loaded the mid-sized vessel onto self propelled modular transporters (SPMTs) fitted with bolsters and transported it to its dress out location, adjacent to where it would be lifted and set in place. 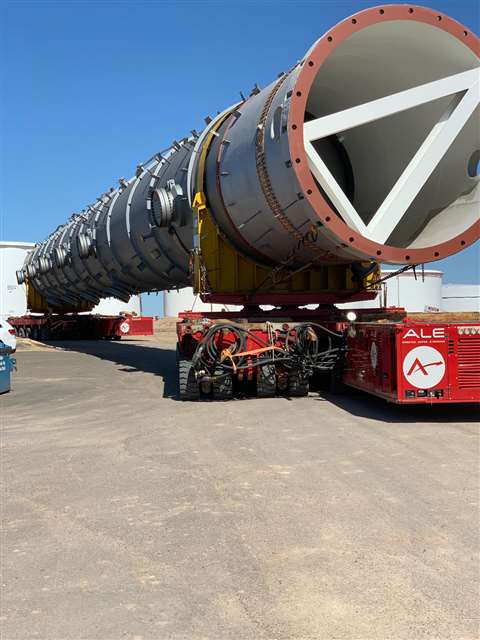 Once dress out was complete the vessel was weighed and its centre of gravity established. Attached by its skirt ring to an SPMT with a 450 tonne capacity tailing frame, it was then tailed into a vertical position and set on its foundations.

Due to its size and weight, the largest vessel was transloaded onto SPMTs using ALE’s 635 tonne capacity gantry lifting system. Having been shipped out of orientation, the vessel was then was rotated 60 degrees at the dress out location. The rotation was performed using chain hoists in combination with the gantry.

The largest vessel was then tailed up using a tailing frame mounted to an SPMT and a 1,350 tonne crawler crane. The crane featured a 84 metre (275ft) main boom configuration and a 560 tonne counterweight. ALE said the radius of all tailing lifts was 38 metres.

The company’s working methodology was designed to minimise working at height and to ensure refinery activity could continue throughout the installation. 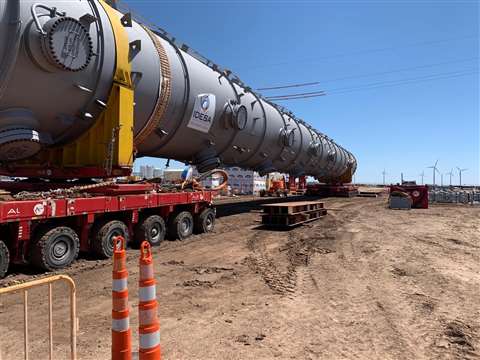 A pressure vessel on site at the refinery in Texas, USA