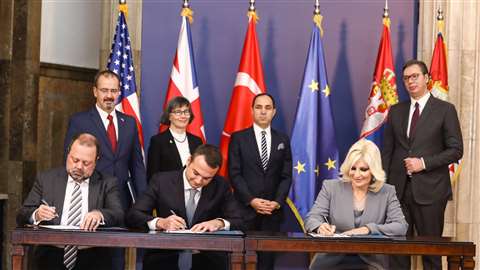 The signing of contracts for the Moravian Corridor construction

The first Serbian 5G-ready motorway – the Moravian Corridor – is soon to be constructed in a joint venture between privately-owned US construction firm Bechtel and Turkish engineering company ENKA.

The motorway, which is in the West Morava river valley area, will stretch out 112km (70 miles).

Costing an agreed sum of €745 million (US$826 million), the road will become the second major road transport link in Serbia, connecting communities and businesses from Pojate in the east to Preljina in the west.

Part of a wider regional transport plan to improve trade links throughout the Balkans and build economic ties to Western Europe, the road will link up with transport corridors which run to Austria and Greece, via Slovenia, Croatia, and Macedonia; and to Italy and Romania via Montenegro.

A telecommunication corridor will be built beneath the side of the motorway to allow for future 5G fibre and tower installations.

A major flood defence system will also be constructed by the Bechtel ENKA team to protect the areas around the motorway from flooding, erosion and subsequent water pollution.

There is challenging mountainous topography to overcome in the region and, as a result, the route is expected to include 40 bridges – the longest expected to span around 600m.

The partnership will prioritise local people and local suppliers to successfully deliver the project and Bechtel has said that training will be given to help improve skills in the region.

Together the projects are expected to create around 10,000 jobs over the course of construction, with 4,000 people employed at its peak.

Serbian Deputy Prime Minister and Minister of Construction, Transport and Infrastructure, Professor Zorana Mihajlovic, said that the construction of the Moravian Corridor is in Serbia’s economic interest as it will connect more than half a million citizens living in the area.

Mihajlovic said, “It will be the link for more than 20,000 small and medium-sized enterprises with the largest traffic corridors: Corridor X which connects us with Bulgaria and North Macedonia and Highway Milos the Great towards Montenegro and Bosnia and Herzegovina.”

Bechtel stated that this is the first time a US contractor has been involved in a major infrastructure project in Serbia, attributing the successful bid to its long-term partnership with ENKA.

The two companies have been delivering major infrastructure projects in the Balkans since the 1990s, including motorways in Albania, Croatia, Turkey and Romania.

Mike Wilkinson, Bechtel’s general manager for Europe, said, “We are delighted and honoured to have been chosen by the Serbian Government to build this transformational motorway, our first in the country.

“It is thanks to their vision that we will be delivering much more than a road – the motorway will create a vital economic corridor as well as solve the challenge of flood protection and provide digital connectivity. The Bechtel ENKA team now looks forward to breaking ground, marking the start of a long-term partnership with Serbia to support world-class infrastructure that creates jobs, connects communities and grows the local economy.”

Construction is expected to begin in 2020.