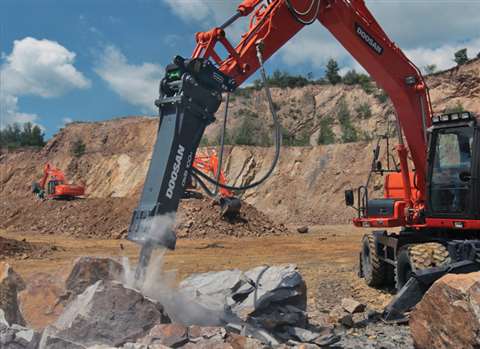 Doosan Construction Equipment now offers a range of five hydraulic breakers – the DXB100H, DXB130H, DXB170H, DXB190H and DXB260H models – for use on Doosan wheeled and crawler excavators from 14 to 38

In September last year, Atlas Copco celebrated the 50th anniversary of the introduction of the hydraulic breaker – an innovation that transformed the industry.

German manufacturer Krupp Berco Bautechnik, which was acquired by Atlas Copco in 2002, developed the rig-mounted hydraulic breaker and took out a patent in 1963. The first machine, the HM 400, is said to have attracted huge interest at the Hannover fair in 1967, with more than 2,000 units sold.

The aim was to save time and labour in demolition and mining operations where, at that time, pneumatic tools were widely used. The new concept meant that one person operating a rig-mounted hydraulic breaker could do the same amount of work as several operators with pneumatic tools.

Today, hydraulic breakers are in general use, produced by dozens of manufacturers around the globe. The technology has come a long way since its introduction, with manufacturers now integrating advanced features such as high flow hydraulics, variable speed and anti-blank firing systems into their latest modes.

But the rental side of the industry isn’t necessarily interested in breakers boasting lots of on-board technology. Versatile, compact models are most in demand, and, low maintenance and durability are key requirements.

“Western Europe and North America are the most important markets for breaker rental business. That has been a trend for a couple of years as companies try to streamline their assets,” he explained.

Sandvik has introduced four new Rammer branded breakers in the shape of three new small range units and the 5011 in the large range.

The new small breakers are the 255, 355 and 455 that plug a gap in the company’s line up and are intended for carriers from 1.2 to 5.2 tonnes. They are also ideal for the rental sector, according to the company, and feature the constant blow energy operating principle to maximise productivity and profitability.

Meanwhile, Finnish manufacturer Avant Tecno has launched a pilot equipment rental project in the UK – Avant Hire, and has plans to expand this business into other countries soon.

Avant Hire offers discounted packages of Avant machines to existing rental companies, as well as marketing support and business development advice. The idea is that both parties proactively work together to grow the Avant Hire fleet, together with other Avant Hire partners.

Avant machines offered under the rental package include the 185 demolition robot, while the wide range of attachments available to hire also includes breakers for compact carriers.

For its part, Caterpillar claims its new E Series line of breakers feature -47% fewer parts than the equivalent D-Series model they replace. The company said the idea was to provide quicker and easier servicing.

It has added four new breakers to its E Series line, intended for customers using mini excavators, skid steers and backhoes in North and South America.

The new breakers are the H35E, H45E, H55E and H65E, designed for carriers weighing between 1.1 and 9 t. All four models are available in either standard or silent configurations, with the latter breakers carrying an additional ‘s’ designation after the model number, e.g. H35Es.

The silenced versions use a fully enclosed housing to suppress noise, while the suspension system includes buffers at the top and bottom to adsorb reflective forces and isolate the breaker from the carrier. A suspension jack also helps to dampen vibration and sound.

In addition, the H45E and H55E are also available as pin-on and flat-top units. The flat top models can be used on Caterpillar machines and those from other OEMs, while the pin-on models are use on dedicated hammer-equipped Cat carriers.

And Volvo’s latest series of breakers also targets the compact market. The seven-model HB range, launched last year and now being introduced to global markets, is designed for carriers weighing between 1 and 10 tonnes.

The breakers are equipped with a cushion damper to reduce noise and vibration through the machine, while the HB08 can be adapted to suit the application using dual-speed control, and the HB07 and HB08 have anti-blank firing to prevent them from continuing to strike once the material has been completely penetrated.

For its part, Montabert, has introduced a new mid-sized breaker for use on backhoe loaders and excavators weighing between 8 t and 18 t. The 501 Next generation (NG) was introduced to commemorate the launch of the company’s first fully hydraulic concrete breaker more than 45 years ago.

The model is said to be 30% lighter than its predecessor, but 75% more powerful. This improved power-to-weight ratio has been developed to boost efficiency for aggregates producers, as well as construction and demolition contractors.

The breaker delivers up to 870 blows per minute and boasts performance-improving features including an energy recovery system that captures and recycles recoil energy from the piston to increase strike power, as well as a blank-fire protection system that reduces harmful metal-to-metal contact.

In addition, the 501 NG hydraulic breaker features an upper and lower suspension system that has been designed to extend the carrier’s work life by absorbing harmful vibrations and stress waves. Optional features include an air pressurisation kit for underwater applications, as well as an automatic, cradle-mounted grease station that delivers continuous oil flow, reducing bushing and tool wear.

Of potential interest to the rental industry is Montabert’s claim that, in comparison to hydraulic breakers of similar size, the 501 NG requires minimal maintenance, increasing operator productivity. It said the breaker’s simple design — characterised by fewer wear parts and no tie rods — enabled operators to more efficiently complete routine maintenance on-site and with standard tools, including the replacement of the breaker’s bushing.

On the larger end of the breaker scale, the latest breakers from Dehaco, meanwhile, come in the form of the Ibex range, developed for excavators weighing up to 46 t. A key feature is the advanced hydraulic circuit on the range, which provides increased flow to the valve and piston, resulting in faster cycle times, increased rod penetration and more productivity than the manufacturer’s previous models.

Other new heavy duty hydraulic breakers on the market include JCB’s HM1770, HM2470 and HM3070 Hammermaster models, for carriers weighing between 19 and 50 tonnes.

It said its new breakers – the largest that it produces – offer up to 28% more efficiency and up to 92% more performance than previous models. The latest three breakers extend the heavy line range to six updated models –the HM870, HM1270, HM1570, HM1770, HM2470 and HM3070, for carriers in weighing between 12 and 50 tonnes. JCB said productivity and efficiency had been maximised with an internal control valve which increases blow frequency in hard applications.

JCB’s Autogrease system also features as standard, ensuring that the breaker is correctly greased to give a smoother action and extended bush life. This is further complimented by a dust wiper system which prevents dirt ingress. The new range of JCB Heavy Line breakers are silenced as standard and are said to be up to 5 dB quieter in operation.

It is clear that manufacturers are working hard to improve the efficiency of the latest breaker models, whilst reducing the amount of time that operators need to spend maintaining them. It will certainly be interesting to see how manufacturers migrate the wealth of technology on their premium line products over to their basic breaker ranges as the demands of customers change over time.