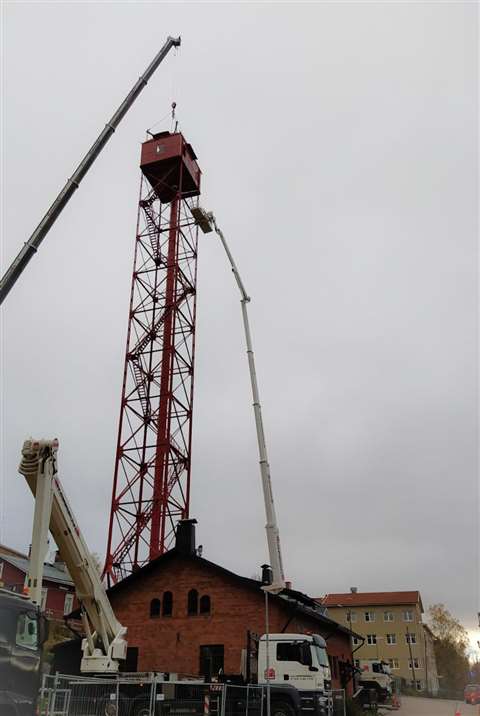 A 55m high shotgun pellet factory, built in 1908, is an historical landmark in Bronto Skylift’s hometown of Tampere, in Finland, and the only pellet tower still in existence in the country. The tower is undergoing a full renovation, and in addition to other equipment, Finnish rental company Lamminsivu is using two Bronto Skylift truck mounted platforms to carry out the renovation.

When the tower was operational, it produced 300000kg of shotgun pellets per year, by melting lead at the top of the tower and allowing it to drip down to form perfectly shaped pellets. Production continued at the plant until 1972.

The renovation started in March, by dismantling the tower piece-by-piece so that the sections could be worked on. Now the tower is being erected in its original position, again piece-by-piece. During the process 65m and 70m working height Bronto XR-range units are being used to bolt the sections together, as well as installing lightning and other necessary additions.

“The location is at a windy lakeshore, so a sturdy and stable Bronto is really needed to get the job done. The big cage rotation has come in very handy too,” said Vesa Lamminsivu, the CEO of Lamminsivu.

The renovation is scheduled to end this month and the residents of the city of Tampere will again have their iconic landmark in place – sturdier than ever.