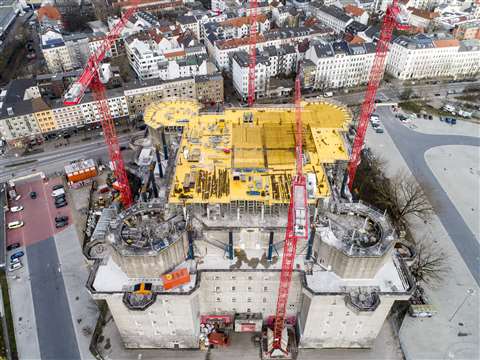 Four freestanding Wolff tower cranes on the Hamburg Flak Tower. The Second World War building will see the addition of five pyramid-like levels to its roof, containing a public garden, an hotel, a memorial for victims of Nazism, plus cultural and exhibiti

An imposing grey concrete building in the St Pauli district of the German city of Hamburg is being developed with the addition of a garden and five pyramids. The Flak Tower was built in 1942 during the Second World War as an anti-aircraft bunker to provide protection from air raids. It is now a listed historic building housing creative enterprises.

The new public garden will offer panoramic views across the Hanseatic city and there will be a memorial to the victims of the Nazi regime, plus cultural and exhibition areas and an hotel.

Civil engineering contractor Georg Bähr commissioned the four 8.5 tonne capacity Wolff tower cranes for the project. A challenge from the beginning was to find a good time to erect the cranes. The bunker is next to the Heiligengeist festival grounds which is where the Hamburger Dom, Northern Germany’s largest public fun fair, is held three times a year, for weeks on end.

“Assembling the cranes during the fair was not an option due to the lack of space. Given that the fair is held on twelve weeks of the year, co-ordinating the time slots for the assemblies with the city authorities and the con-tractor was quite a task,” said Carsten Druske, head of rental operations Germany and branch manager at Wolffkran Dortmund.

Two Wolff 6031.8 clear flat top tower cranes were erected in four days in 2019 using a 500 tonne capacity wheeled mobile crane with luffing jib. Both had to be erected from the same position due to the difficulty of finding sufficient space to set up the large mobile crane.

Carsten Druske explained, “In this way we were able to achieve high freestanding tower heights and cover the entire construction site with four cranes.”

Further challenges included the large amount of formwork, prefabricated parts and construction material necessary for the job to be accommodated in the restricted space available. In addition, the building remains occupied. Falko Stephan, Ingenieurbau George Bähr site manager, said, “Yet the collaboration with Wolffkran has been solution-orientated and seamless both during the current construction phase and in the preceding planning phase, which included dimensioning of the crane loads and crane assembly.”

Completion of the five-level extension of the St. Pauli bunker is due in 2021. Around 4,700 trees, shrubs, hedges, bushes and climbing plants will be planted atop the bunker, helping to make it a new city landmark. 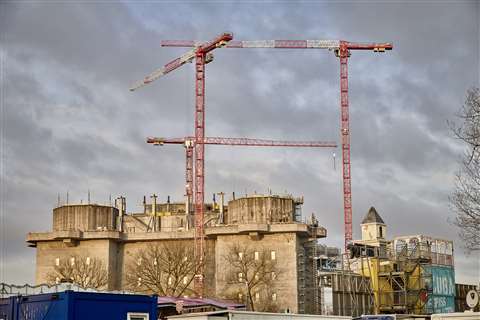