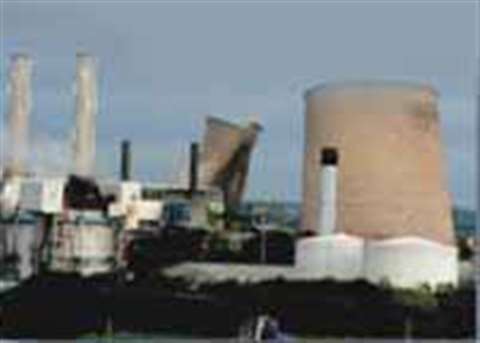 It is now undergoing decommissioning, as are many other facilities on the Sellafield site in Cumbria, UK. British Nuclear Group's (BNG) work at the Calder Hall work involves the removal of four gas cooled reactors, two turbine halls, numerous ancillary buildings, and the most obvious physical sign of the station's presence – its four cooling towers. These were brought to the ground using explosive demolition techniques on Saturday September 29th 2007. The whole station covers 167,000 m2 (1.8 million ft2) and comprises 62 buildings – the challenge for the decommissioning team is to clear the site in the fastest and most cost-effective manner, while at the same time exercising due care for the environment and the health and safety of the local communities.

And so to the towers. Each of the four hyperbolic cooling towers were 88 m (289 ft) and 60 m (197 ft) tall, and were made up of a steel reinforced concrete, sitting on 64 steel reinforced concrete legs. An initial report into their removal considered all the possible methods of demolition open to the project team, including dismantling by hand and the use of high reach demolition excavators. However, these were discounted because of the potential risk posed to workers operating at height for prolonged periods.

The project team finally decided to use explosive demolition to bring the towers down, a technique that has been used on more than 200 such towers in the UK over the years, including four at another of the UK's nuclear installations, the Chapelcross Power Station, in June of this year.

BNG selected US contractor Controlled Demolition Inc to carry out the job. This company has extensive experience of complex blowdowns and has carried out these jobs around the world.

Given the nature of the site, with active nuclear processes ongoing in buildings around each of the towers, a full safety assessment was required, detailing all the key hazards arising from this demolition process, assessing normal, fault and worst-case conditions. This covered the potential impact of dust, debris, ground vibration, air over-pressure, projectiles, noise, radiological status and the use of explosives.

Prior to the blowdown, a full remediation was carried out to remove any potentially hazardous materials in and around the structures. Like any cooling towers, the four Calder Hall towers contained asbestos piping tanalised wood (wood treated with heavy metals to make it resistant to deterioration in water). Historical information and an on-site sampling and analysis regime indicated that there were areas of contamination within two of the towers and BNG worked closely with the regulators to ensure that these were mitigated prior to demolition. Two methods of achieving this mitigation were used – complete removal of the contaminated area in its entirety or removal of the surface of the area. Choice of method was determined by the worker risk and the environmental benefit, judged on a case-by-case basis.

The technique for the blowdown was simple. Approximately 60% of the circumference of the shell and legs were removed by the explosive charges, causing the towers to tilt approximately 5° and fall predominantly within their own footprints, with all effects of the demolition being confined to 200 m (656 ft) of each tower's footprint. This minimised the affects from the blowdown on the surrounding areas and at the same time confined the demolition debris to within 10 m (33 ft) of the towers themselves.

Blast protection was an important feature of the job, aimed at preventing any impact on surrounding structures. Protection to the outside of the shell directly in front of the intended blast area was installed in the form of chain link and geo-textile fabric, with the legs being treated similarly. The protection overlapped the top and bottom rows of blast holes by at least 50 cm and was secured at 2 m (6.6 ft) centres to prevent it from becoming displaced by the detonations.

The resulting demolition debris is currently being processed, with 12 weeks expected to be required from the moment of blowdown. The reinforced concrete will be processed on the Sellafield site, with the reinforcing steel being separated and recycled where possible. The concrete is also being processed on site and is then used to back fill the cooling ponds that are situated beneath the towers.