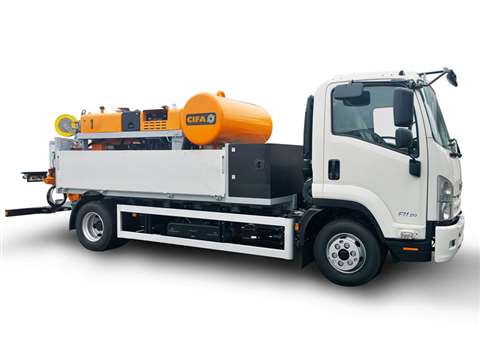 Cifa’s new UB504 concrete pump has been designed to fit on a compact chassis.

New from Cifa at Intermat 2015 will be the new UB504 truck-mounted concrete pump. This small unit is designed for quick and easy access to construction sites and will be shown at Intermat mounted on a two-axle Isuzu chassis. It features an S6 open circuit pumping unit, with 200 x 1000 mm cylinders and a 250 litre hopper.

An interesting new specialised machine from the company is Coguaro, a low profile 4m3 capacity mixer truck designed for low-headroom off-road applications like tunnelling and mining.

Safety features include an infra-red rear-view camera, and sensors to detect objects and obstructions.

Another innovative truck mixer on the Cifa stand will be the Energya E9 hybrid model. This features and electrically rotated drum, powered by lithium ion batteries that recharge from waste energy that is captured during road travel. As well as reducing fuel consumption by as much as 30%, Cifa says this system also contributes to lower noise levels, and is useful in emissions-sensitive applications such as tunnelling.

Also new in the 9 m3 drum class is the SL9. Cifa says it has been designed to meet European requirements for a compact machine, without compromising volumes, simple maintenance, safety and other key factors.

Meanwhile, Cifa will use the show to unveil new models in its Carbotech range of truck-mounted placing booms, which use carbon fibre for a number of sections. The company is adding two new models to take the range from four to six machines.

The K53H has five-section boom, with the final two made out of carbon fibre. The K60H has six sections, again with the two final ones in carbon fibre. Cifa says the use of carbon fibre helps cut down on the dead weight of the boom, reducing fuel consumption when travelling between sites, and/or allowing more accessories to be loaded onto the truck.