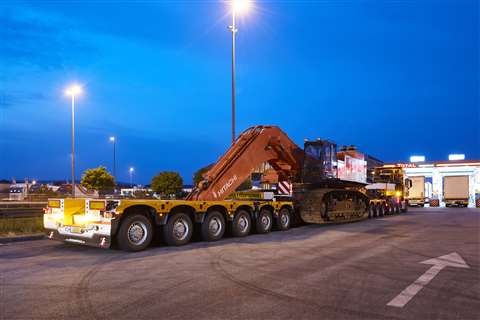 A gross combination weight of 152 tonnes and a distance of 1,200 kilometres through four countries – these are the key data of a project handled by Luxembourg demolition expert Demolition et Terrassement XL and its CombiMax combination.

Demolition et Terrassement XL used a Faymonville 4+6 CombiMax combination with excavator trough and extendable excavator deck. In this version, the semi-trailer achieves a payload of 108 tonnes. This, however, is just one combination among many possibilities: the modular CombiMax principle means the right solution can be assembled according to the user’s needs, the manufacturer said.

On leaving the Faymonville factory in Luxembourg, the CombiMax went to work immediately, making its way to Makkum in the northern Netherlands. There, a Hitachi ZX 870 shovel dredger weighing around 95 tonnes was waiting to be moved. Demolition et Terrassement XL had to transport this large machine to a quarry in Landres, France.

Over a period of about a week, the heavyweight dredger with an overall length of 30 metres made its way to northern France via Germany and Luxembourg. The journey through several countries was simple in terms of permits, since the CombiMax has the necessary CoC certification, the company said.