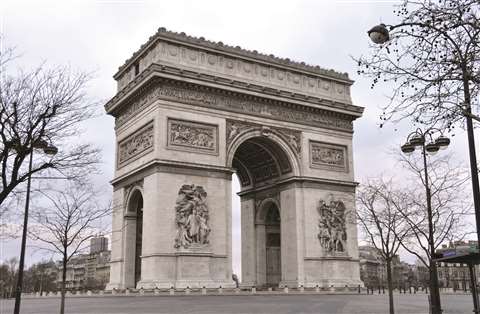 The Arc de Triomphe in Paris , on an eerily quiet Champs Elysées

At the time of writing, France is little more than a week into its national confinement, part of the government’s measures to counteract the spread of the coronavirus.

Currently, over 40,000 people have tested positive for the virus and just over 2,600 people have died. Meanwhile, the numbers grow every day.

Meanwhile, although severe restrictions on movement are in place, the French President, Emmanuel Macron, has stressed the need to keep working where possible. “We have to continue to produce and to keep the country running,” he said last week.

He has also pledged that no business, whatever its size, will face bankruptcy, and promised unlimited state aid and guarantees for bank loans to companies.

At the end of March, Insee, France’s National Institute of Statistics and Economic Studies, produced its first report estimating the impact of the virus on the country’s economy.

While the organisation’s director general, Jean-Luc Tavernier, said he hesitated before releasing the report, due to the “fragile” aspect of the statistics, the numbers are nonetheless dramatic.

In the week of the report’s release, Insee estimated that general economic activity across the country had fallen by 35%, compared with the norm. 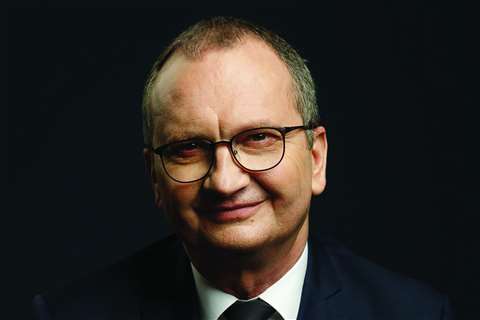 However, the story was far worse for construction, which had seen a 90% fall in activity.

On the back of the worsening situation, Insee predicted a fall in GDP of approximately three percentage points over the course of 2020 – three times more severe than previous estimates.

While, in neighbouring Germany, a group of construction industry associations lobbied the government to keep sites open, the French Building Confederation (FFB) advised its own members to cease operations in an effort to keep workers safe and avoid spreading the virus.

A political furore ensued, with France’s employment minister, Muriel Pénicaud, accusing the FFB of “scandalous defeatism” and of taking advantage of aid offered by the government.

In a TV interview, reported by Global Construction Review, she said, “It is not right that some people are continuing to work while others are not,” adding that she was shocked that one of the branches of Capeb – the confederation of small construction businesses – had advised its members to stop work, telling them that the government would cover the loss of revenue.

In response to these statements, Jacques Chanut, FFB’s president, sent an open letter to the minister, stating that his members were fully aware of the “disastrous consequences” the decision to close sites would have on their businesses, but the “sacrifice” was made “in conscience and responsibility”. 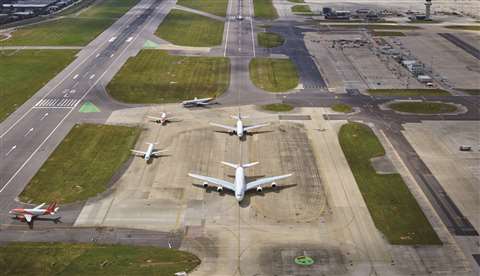 Vinci currently manages 45 airports around the world, the majority of which are suffering under coronavirus measures

He also spoke to the media about the government’s decision not to call for the shutdown of sites and called for a 10-day period to consider the best next step to ensure the safety of construction workers.

Echoing the sentiments of many in the UK construction industry, who have complained about the mixed messages coming from government, Chanut told France Info, “It’s an emergency, because we’ve just lived through a totally chaotic 48 hours in which our colleagues in the building and public works sector don’t know whether they can or should work. There are very contradictory signs because, beyond the construction site itself, which raises real questions in terms of the protection of our employees, we don’t know whether or not we can work.”

No one reading this will need reminding about the seriousness of the virus from an economic perspective, but it’s worth stressing that the French construction sector employs approximately 1.5 million people within the country’s borders and accounts for some 6% of its GDP.

The damage being done to the French economy, as major construction sites lie idle cannot be overstated.

As an example, even at this early stage of measures, French construction and concessions giant Vinci has given notice that it will not be able to meet its revenue targets for 2020.

Vinci is responsible for a number of airports and toll roads in the country, none of which are likely to see a great deal of traffic in the coming weeks and possibly months. The company said it had seen a fall in passenger numbers of approximately 40% in the first three weeks of March – numbers that are soon likely to appear relatively healthy. 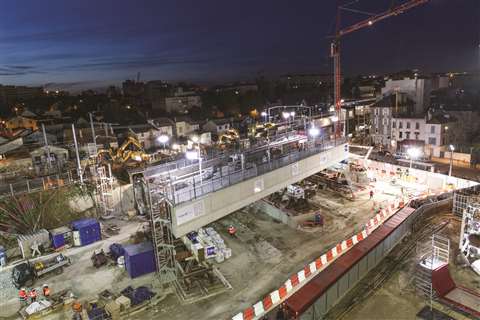 A 3,000-ton slab is moved into place – part of the future roof of the Arcueil-Cachan station on the Grand Paris Express

The company’s toll roads experienced a 16% drop in business, and Vinci will be hoping harsher measures are not required, which might further restrict road use.

As Vinci’s share price tumbled, the company said it is currently impossible to accurately forecast its 2020 earnings.

The French road builder Colas – part of construction giant Bouygues – has called a halt to all of its construction activities in the country and simultaneously cancelled all of its bitumen purchases.

From a business perspective, the timing could not be worse for an industry that should now be emerging from its traditional winter slowdown.

Following the government’s announcement that only essential travel should be undertaken for a 15-day period, Colas responded by sending its staff home for the same period – with an expectation that an extension will follow.

Both Colas and Vinci have said their business operations in other countries have not been as severely affected at this time.

As with most other European countries, key projects are currently being allowed to continue.

Probably most notable is the Grand Paris project – arguably Europe’s largest infrastructure project – in which Vinci is playing a leading role. 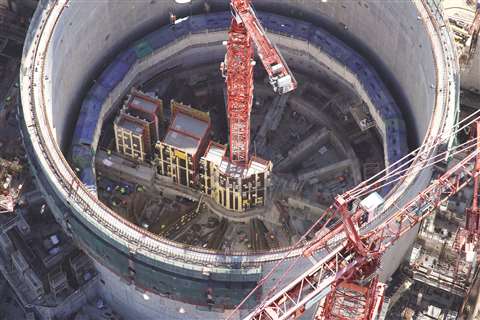 One would expect that a juggernaut of a project such as this is proof against even such an era-defining event as Covid-19; it began, after all, in 2010 and was not scheduled to be completed before 2030. Yet, within the overall scope of a project set to transform a large chunk of the Ile de France region, there could be elements that will feel the pinch of a tightening government budget.

Vinci has mobilised numerous different divisions to work on aspects of the project; Vinci Construction for civil engineering works; Eurovia for urban development and the railway network; Vinci Energies for IT and electric engineering; and Vinci Immobilier for the development of real estate.

Now, the Société du Grand Paris – the body charged with delivering the monumental project – has pulled the plug on all projects linked to it, for an indefinite period.

A Société du Grand Paris spokesperson said, “In the exceptional context resulting from the introduction of measures to limit travel, the conditions are no longer met to guarantee the safety of journeymen on construction sites without continuing to mobilise, directly or indirectly, the rescue services strongly mobilized elsewhere.”

So, the project sits completely idle. The four new lines (15 (basically circling Paris), 16, 17 and 18), two extensions (11 and 14) and 68 new stations across the region are halted, as is the progress of the various tunnel boring machines, partway to digging some 200km of new track.

Another huge project severely affected is the already significantly delayed construction of the 1,650MW third reactor at the Flamanville nuclear power plant in northern France. 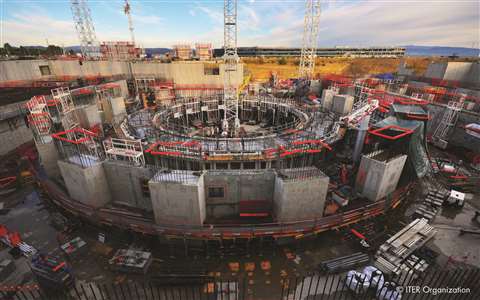 Before the coronavirus struck, the reactor project had been beset by technical problems and EDF (the group developing the project) had tripled the estimated construction time, from 5 years to more than 15. At the same time, the required budget had rocketed by more than 200% – now totalling approximately €12.5 billion.

Now EDF has said that construction work on the site has been reduced, but the project will continue and the government has given permission for the completion date of the reactor to be put back to 2024.

Staff numbers have also been reduced at the two in-commission reactors, which have been offline since January and September 2019, respectively, while major maintenance work is carried out.

When the coronavirus episode is over, the world will be a very different place. Amid the doom and gloom, there have been very few rays of light, but one has been the fall in air pollution, which is receiving increasing attention in the media. Undoubtedly, the case for renewable energy will be strengthened by this and France is already moving on a number of relevant projects.

In September 2019, a consortium of EDF Renouvelables and Enbridge announced that its Saint-Nazaire offshore wind project was nearing construction start. As recently as last month, contracts were being awarded for engineering firms to work on the project. Whether it will still be operational in 2022, as had been expected, is now very much open to question.

The 480MW wind farm will be located some 12km off the coast of Loire-Atlantique in western France and will comprise 80 GE Haliade turbines, manufactured in France. 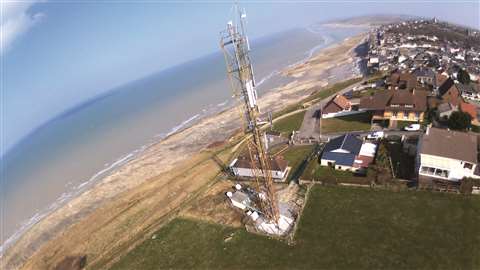 An offshore substation will be designed, built and installed by a consortium of Atlantique Offshore Energy, GE Grid Solutions and Société de Dragage International. At the same time, another consortium, between the Belgian marine engineering firm DEME and French construction firm Eiffage, will construct and install 80 monopile foundations.

The choppy waters of France’s confinement are also being negotiated by two of Europe’s largest communications organisations, who will work together to roll out the country’s state-of-the-art fibre optic network.

France’s Bouygues Telecom and Spain’s Cellnex recently announced that they would invest around €1 billion over the next seven years in a network that would also include telecommunications sites and data processing centres – with a major part of the remit for the joint venture to accelerate the roll-out of 5G in the country.

One further construction site that will hope to quickly become active when the country’s virus measures ease is ITER (the International Thermonuclear Experimental Reactor) in Provence. 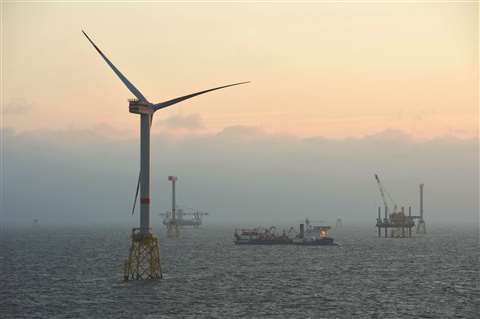 This is the biggest fusion machine in history, a €22.5 billion project designed to test the theoretical possibility of using atomic fusion to economically generate electricity.

There has been phenomenal activity at the site in the past year, yet the reactor was not set to come online until 2025 – and that was before the crisis. Now, the site is quiet and the seven member entities funding the project – the EU, India, Japan, China, Russia, South Korea and the US – must weight for the virus to run its course, before engineers, construction workers and scientists can get back to work on the multi-billion-euro experiment.

If it proves to be a success, the brave new post-coronavirus world will certainly contain some bright sparks.