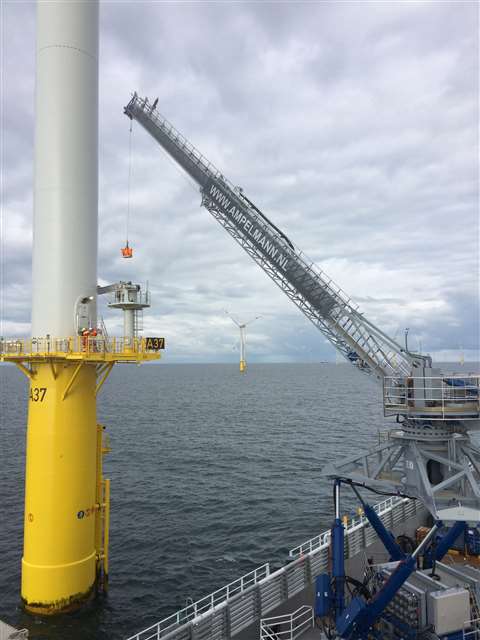 The E1000 motion compensated access system transforms from a gangway into a crane boom. It’s 30 metres in length and is capable of safely transferring people and up to 1,000 kilograms of cargo in rough seas with waves up to 4.5 metres in height, Ampelmann claimed. The enhanced, automated system now employs remote-controlled hydraulic pin pushers to fix the gangway booms in under a minute simply by pushing a button, said Ampelmann. To switch from cargo to personnel transfer mode, the crane hoisting cable is placed in freewheel mode to allow the boom to telescope, significantly increasing the available working time, the company said. Previously pins were manually deployed and the entire conversion process took at least ten minutes to complete, said Ampelmann.

Diederick Nierstrasz, Ampelmann’s offshore wind product development manager, commented: “Building on the success of the existing E1000 we recognised an opportunity to enhance the current system to reduce the time and physical effort taken to change the gangway work mode from personnel to cargo. With this innovation it now takes less than one minute. This is a huge time saving for our clients, resulting in a more efficient use of their valuable assets and an increase of the overall project performance.

“Due to the E1000’s versatility, the system is already the preferred choice in the offshore wind sector. This improvement will provide even greater operational efficiencies for our customers not only in offshore wind but also in the oil and gas industry where compensated lifting capacity is required.”

A total of four E1000 systems are currently being deployed. One is being used by Siem Offshore Contractors on its vessels for inspection, maintenance and repair works on Germany’s first commercial offshore windfarm. Earlier in 2017, the gangway safely performed more than 12,000 people transfers and 7,000 cargo lifts between an offshore support vessel and the wind turbines over a ten-month period, leading to an extension of the original contract, said Ampelmann. Future development of the E1000 will focus on increasing its lifting capacity, the company added.