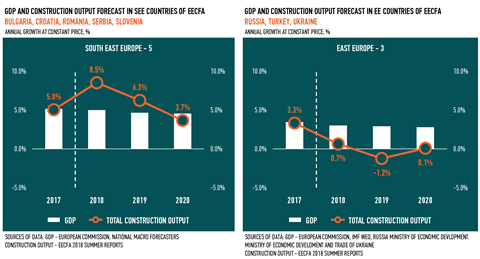 South Eastern Europe is seeing strong economic growth, which is leading to expansion in building construction, but while Ukraine is expecting positive figures, Russia and Turkey are looking flat, a new report has found.

Looking at construction up to 2020 in the South East Europe five – Bulgaria, Croatia, Romania, Serbia, Slovenia – EECFA said that the region was posting strong economic growth which was fuelling building construction.

Some of the region’s housing markets are seeing record-breaking results, it said, which it added was leading to talk of overheating.

“We think these markets are far from it, though,” said EECFA. “At the same time, construction labour shortage, due to economic migration from these countries to Western Europe, is one factor giving cause for further concern in the future.

“With accelerating absorption of EU funds, civil engineering is expected to contribute positively to growth all the way on the forecast horizon.”

EECFA said that construction output in Bulgaria was continuing its recovery and was expected to reach 8.8% growth in 2018.

The star performer was said to be the residential construction segment, benefiting from improved employment and real disposable income, as well as the ongoing process of the concentration of population in big cities.

Additionally, the association said that the steady economic development would increase investments in non-residential projects.

Civil engineering construction is forecast to contribute strongly in the next few years with EU fund absorption having started to catch up. Therefore, estimations for 2019 are for additional growth of 7.1%, and 6.0% in 2020.

A global trade war, fallout from the crisis with Agrokor – Croatia and one of South East Europe’s largest conglomerates which has been facing a huge debt crisis – as well as rapidly rising construction costs were said to be threats to Croatia’s construction industry.

“And all are now significantly more likely to occur than they were at the time of EECFA’s 2017 winter report,” it added. “But fortunately, none yet constitutes an imminent danger. In 2021 or soon thereafter, growth will probably begin to tail off in a number of important sectors as Croatia’s catch-up phase gradually comes to an end, but exactly when and how this will occur is not yet clear.”

The housing and non-residential segments in Romania were reported to be set to continue their “excellent” performance in 2018, and, in spite of an underwhelming performance in the civil engineering segment, the total growth of the construction sector in 2018 was forecast to reach 7.1%. This was up from a 6.8% rise in winter 2017.

As projects co-funded by the EU are starting to be implemented, the civil engineering situation was predicted to improve slightly, with total construction output in 2019 expected to increase by 6% – up from 5% in the previous report.

By 2020, EECFA predicts that residential expansion will start slowing down and civil engineering will stabilise, and, so total construction should grow by only 2.7% in that year.

The performance of the construction industry in Serbia is now in a third year of expansion and the EECFA said that all indicators were showing more growth on the horizon.

It said that the macroeconomic environment was increasingly favourable and the levels of FDI (foreign direct investment) had also topped record levels. An ongoing boom in building construction is being seen, while the government will add more growth by initiating a new cycle of large infrastructure projects.

“This means construction outputs will sustain a steady rise in the coming years, where practically all segments will see their share.

“Leading buildings projects are in residential, retail and office segments, while roads, railroads and energy are expected to strongly support figures in civil construction,” said EECFA.

Slovenia was said to be showing a steady increase in its construction output growth, with an 8.7% rise forecast for 2018. This overall growth is based on a strong expansion in civil engineering and non-residential segments where a much-improved economic situation in Slovenia has resulted in more public financing available for new construction projects, said the EECFA.

Residential construction was reported to be increasing as well, but the EECFA said it seemed to be lower than the fast-increasing demand for existing dwellings, resulting in fast growth in prices on the secondary market.

“Other segments will depend on the development of only a few large civil engineering and non-residential projects. If their construction proceeds fast, overall construction might even exceed the optimistic forecasts currently in place for Slovenia.”

For this year, the construction market for the region taking in the East Europe three of Ukraine, Russia and Turkey was descried as looking like a mixed bag, with Ukraine’s construction market showing positive expected growth rates, but with Turkey and Russia exhibiting near-zero growth.

Up to 2020, the completion of big-league projects in Russia was said to be exhausting the future pipeline, and this, together with the low solvency of the Russian population and the new restrictive legislation for construction companies, suggested a negative outlook, said the EECFA.

In Turkey, on the other hand, the significantly higher supply over demand for housing was said to be a problem, suggesting a drop next year, followed by just a slight expansion in 2020.

Ukraine should still post positive growth up to 2020, the association forecast, though at a slower rate as the current overheated residential market should gradually cool down.

Last year, the Russian construction market was estimated to have registered a figure of -0.6%, mainly as a result of the slump in civil engineering.

“Even though the Russian economy has finally overcome the crisis and stepped on a positive development path, construction, despite being supported by relatively favourable macroeconomic conditions, will be hit by the completion of many infrastructure projects in 2018 to 2020, such as the Crimean bridge, the buildings for the FIFA World Cup 2018, Siberia Power gas pipeline, and several highways, among others.”

The EECFA said that housing – the second largest segment of the Russian construction market after civil engineering – could become “the locomotive of construction”, but it said this would not happen in the next few years as the segment should drop as a result of newly-introduced legislation that increases the costs for construction companies; the lingering reduced solvency of Russians, and the exhaustion of the positive effect of low mortgage rates.

Turkey, last year, recorded exceptionally high peaks in both construction and occupancy permits for buildings in general, and residential buildings in particular, said the report.

Massive growth in building starts and completions in 2017 were said to have coincided with high growth rates of GDP (gross domestic product).

“The first quarter of 2018 started to witness an inevitable drop from such peaks in permits. Due to the big backlog of buildings under construction, completions increased by 3.4% in the number of buildings, but decreased by 0.5% in their total floor area in the same quarter.”

EECFA said that although real price of housing had been decreasing in most regions, and building construction costs had been increasing together with the depreciation of the Turkish Lira, aggregate construction output of buildings was expected to continue without an aggregate fall in the near future.

Civil engineering construction output, on the other hand, may have less growth than expected thanks to the effects of military activities in Syria on the government’s budget and the depreciation of the Turkish Lira.

The construction industry in Ukraine has good overall growth prospects, said EECFA, which added that it had been a leader in the economy for the second consecutive year.

“The residential market is seeing growth, but supply significantly outnumbers demand and the real income of the population is low. At the same time, demand for new housing remains, mainly in the one- or two-room, and small-sized apartment segments,” it said.

The report found that commercial real estate had, so far, posted slightly lower growth rates, similarly to the overall economy of Ukraine. Civil engineering construction registered the healthy growth rates for 2017 and with state financing, local budgets and international funds, the segment has all the prospects for considerable growth in the future – primarily roads – it said.